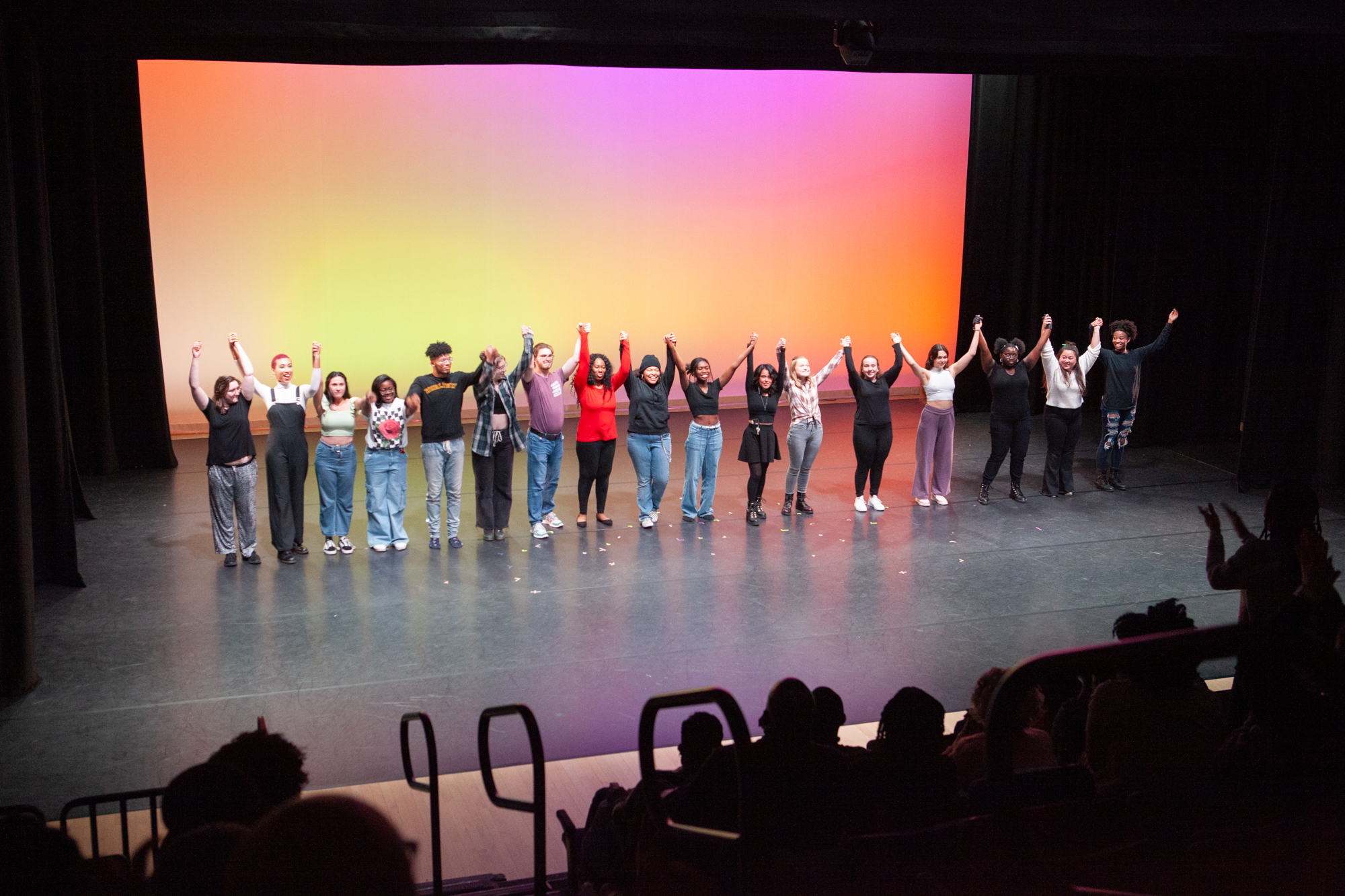 Little Red Riding Hood holds a sword to the narrator’s throat. A sexual assault survivor confronts trauma and suicide. A couple dances their way through conflict, accompanied by a live cover of Adele.

These were a few of the student performances on display at Kreativity Diversity Troupe’s semi-annual showcase,We Are All Liars, on Saturday. Featuring theater, dance, music and even puppetry, the show at the Clarice Smith Performing Arts Center displayed the performers’ wide variety of skills, interests and identities.

“Some of the subject matter was deeper than I expected it to be,” sophomore computer science and theatre major Amelia Talbot said. “They did such a good job of playing with funny content versus serious content that overall, it ended up being a really good time.”

Talbot, who has friends in Kreativity, is considering joining the group next semester.

“If you want to find out what’s on students’ minds, watch a show like this,” Scot Reese, Kreativity’s faculty advisor, said. “It’s what they’re saying. They want us to listen.”

Kreativity has been providing a platform for marginalized voices in the university’s theatre school since 1995. Originally founded as Voices of Color, it provided a space for the few Black students in the majority white theatre school, who were not being cast in shows. It later expanded to include anyone interested in multiculturalism and diversity, said Reese, who helped found the club.

The theatre school has become more diverse since Kreativity was founded, Goldberg said. However, she believes the group’s guiding principles of inclusion, diversity and promoting marginalized voices set it apart from other student theater organizations on the campus.

“I really appreciate that it creates a space where people feel safe to be their most honest selves in a lot of ways, to express those very vulnerable parts of what oppressed experiences can create,” senior theatre major Yani Hill said.

This showcase was the culmination of an entire semester’s work. A theme is chosen at the beginning of the semester, Goldberg said, which every individual performance is based on. This fall’s theme was “perception does not equal reality.”

Club members, or Kreators, spend the next few months developing their performances and providing feedback to each other.

Kreativity only performs original student works. Hill sees this as part of what makes the club so important.

“It’s a really great way of workshopping voices that have historically been ignored,” Hill said.

Matt Lacek, a senior computer science major and co-artistic director, found both a creative outlet and a sense of family among the group. As a white man, he also learned “when it’s time for [him] to shut up.”

“That’s what I think Kreativity is really there for,” he said. “To give people a chance to speak out, maybe on things that they wouldn’t be able to say in other spaces.”

Lacek said one of the challenges the club faces is the fact that it’s almost completely student run. Students are responsible for putting on the entire performance independently, from creating props and rehearsing scenes to running lights and sound.

“Everyone just puts in this big Herculean effort,” he said.

Lacek, Hill and Goldberg are all on the brink of graduating. For Hill and Lacek, this was their last show with Kreativity.

“I always kept coming back to Kreativity because I love the people, I love the attitude, I love the freedom of the art form,” Hill, who is graduating this winter, said.

All three Kreators said they would be taking lessons learned in Kreativity into their futures.

“As an Asian person in theater, I don’t see a lot of characters, roles, made for people who look like me,” Goldberg said. “As a playwright, as a director, as an actor, that’s something that I want to see more and I know that I have to be part of the team that creates those opportunities.”