The Diamond Drag: One Night Only Part One and Two of ‘RuPaul’s Drag Race’ 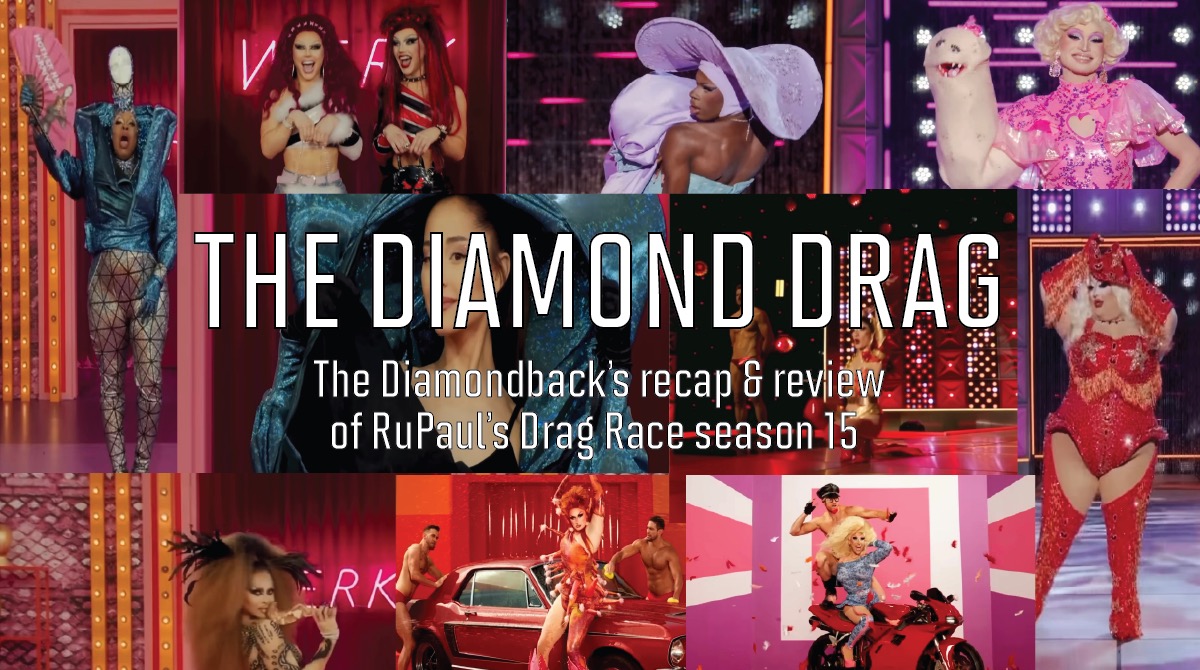 It’s a brand Ru year, and that can only mean one thing: A new season of the television phenomenon RuPaul’s Drag Race. Season 15 premiered with the largest cast in the show’s herstory with 16 brand new queens battling it out for the title of America’s Next Drag Superstar.

A new season also means another year of me offering my unsolicited opinions as we journey through each episode.

Season 15 premiered with back-to-back episodes where we met all 16 queens. They met eight at a time to trick the queens into thinking it was the Drag Race two-part premiere format we saw in seasons six, 12 and 14.

I have to emphasize something now in this review — there are 16 queens this season. That means 16 entrances, 16 photoshoots, 16 talent show performances and 16 runways. I will not be able to talk about each individual.

That being said, let’s talk about my highlights from the first eight to walk in. In order of appearance, we met Irene Dubois, Luxx Noir London, Aura Mayari, Marcia Marcia Marcia, Anetra, Malaysia Babydoll Foxx, Princess Poppy and Sasha Colby.

When I saw Sasha Colby first announced for season 15, I honestly lost my mind. She is a drag legend, and putting her on this platform is so exciting to watch. This is like if Beyoncé decided to compete on American Idol.

We see an early tiff develop after Luxx walks in when Irene makes a joke about Luxx’s hair being 22 inches while Luxx is swearing it’s 40. Luxx, Sasha and Malaysia all had my favorite looks from this batch.

We then see a Drag Race legend from season six, Vivacious, walk in wearing her iconic Ornacia look from her entrance. For those who don’t know, Ornacia was the styrofoam wig head Vivacious wore on her head in her entrance look. Only, it’s not Vivacious. The mysterious person pulls down the zipper on her costume, in a similar fashion to Vivacious, to reveal it was actually Ariana Grande!

The queens then go outside to pose on a vintage car while being sprayed by hoses. Honestly, none of the photos were that great. I thought Luxx was going to win the photoshoot, but Irene ended up winning.

The maxi-challenge is then announced to be the One Night Only talent show. The queens are also tasked to choreograph their own original opening number. As group one begins to choreograph, production cleans up the Werk Room to get the next eight queens ready to enter.

Again, the gag of Vivacious and Ornacia walking in happens — only this time, it actually is Vivacious. If I found out the other group got to meet Ariana Grande, I would honestly be beyond mad, but I’m happy Vivacious got some airtime.

RuPaul walks in and welcomes the queens and announces the first mini-challenge: A photoshoot in homage to season two’s first photoshoot.

Instead of posing on a cannon and being blown by a massive fan like in season two, the season 15 queens posed on a motorbike and were blown by a fan. The only real standout was when Spice took off her wig and put on a shower cap to take the photo. You could see the pain in Ru’s eyes when that happened.

We then see a little tiff between the group two queens, excluding Sugar and Spice, where they all discuss Sugar and Spice being TikTok queens with little performing experience.

Loosey Laduca wins the mini-challenge and once again, the queens are told for their first maxi-challenge they’d be participating in the One Night Only talent show, and they must choreograph their own original number.

Tensions rise as Ru then brings the two groups together. Everyone smiles and hugs and introduces themselves and all those pleasantries, until it’s time to choreograph 16 drag queens while eight have already done a good chunk of the number.

The next day the queens walk in, and it’s time to prepare for the talent show. While getting ready the queens discuss being “old school” versus “new school.” Queens such as Sugar, Spice and Luxx talk about being undervalued as queens who got their start on social media while Mistress and Irene talk about being raised in a more classic drag scene. Sugar and Spice made a joke about how they thought so many people were mean, but Mistress and Irene simply just say that’s how they all chat in the dressing rooms at shows and they do it with love.

We head to the main stage, and it’s time for the talent show. I will not be talking about each individual act as there were so many, but I will highlight some general thoughts and my favorite and least favorite acts.

All in all, a lot of queens were incredibly strong. I really think the only queens who weren’t that strong were the eventual bottom three and Aura.

Excluding the top three, I loved Princess Poppy, Luxx Noir London, Mistress Isabelle Brooks and Robin Fierce. I was also pleasantly surprised by both Sugar and Spice knowing that their performance experience is very limited.

The runway theme was “Who is she?” My standouts were Mistress, Luxx, Sasha, Sugar and Spice.

We find out Anetra, Jax and Marcia Marcia Marcia are the top three queens of the week and Loosey LaDuca, Irene Dubois and Amethyst are the bottom three. I completely agree with both the tops and bottoms. Jax’s hair jump rope was next level, Marcia brought such a great blend of comedy and technique and Anetra literally went above and beyond in all aspects of her number. From the dips, splits and duck walking to punching a wood board and then kicking one in half, it was actually insane to watch.

Anetra was announced the winner of the challenge and Irene and Amethyst were the bottom two. I personally would’ve put Loosey in the bottom instead of Irene, but I saw the bottom two being any combination of the three.

The queens lip sync to “7 Rings” by Ariana Grande, and I think it was a decent lip sync to kick off the season. Amethyst wins, and I agreed with this choice. Irene Dubois becomes our first queen to sashay away.

Despite Irene leaving, I truly have a feeling this is not the last we’ll see of her. After three years of sending no one home on the premiere, I don’t believe RuPaul is going to eliminate someone now.