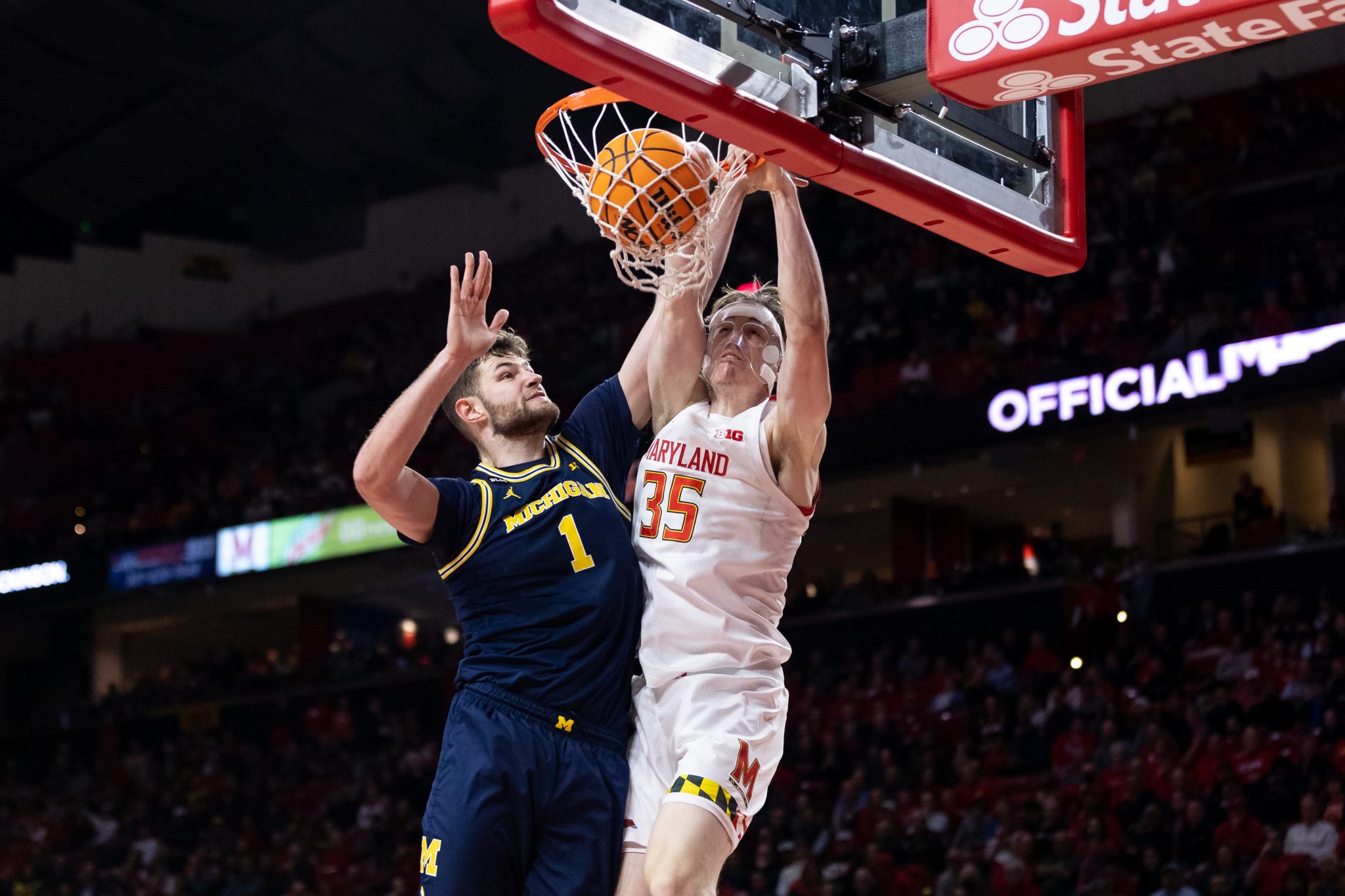 Caelum Swanton-Rodger checked into Maryland men’s basketball’s game against Michigan in the first half with a transparent protective mask strapped to his face and little expectations. The Canadian freshman had never accumulated more than 10 minutes in a game, and had few meaningful minutes to his name.

Yet, there Swanton-Rodger was, jogging onto the floor for the second time in a tight game toward the end of the first half. The center contributed in the next few minutes against Hunter Dickinson, who dropped 32 points in Maryland’s last matchup against the Wolverines.

Dickinson picked Michigan over his hometown Terps, despite attending DeMatha Catholic in Hyattsville and playing high school basketball with Jahmir Young. The opposing center received a chorus of boos from Maryland fans seemingly every time he was involved, but Terps fans roared in one play that featured Dickinson during Maryland’s 64-58 triumph over Michigan Thursday.

Swanton-Rodger rolled off a pick and snatched a pass from Hakim Hart before catching a glimpse of an empty court and elevating. Dickinson, who came over late to defend Swanton-Rodger, had little chance. The freshman, his face pressed against his mask, slammed the ball above him and hung in the air.

The score lit up social media, garnering attention from Maryland fans and popular Twitter accounts like The Field of 68 and Big Ten Network. The freshman also fed into Batman comparisons from fans with a picture of the dunk in an Instagram post geotagged “Gotham” and captioned: “Nobody cared who I was until I put on the mask…”

The 6-foot-11 center said he is used to playing above the rim after the game and his teammates weren’t too surprised the freshman was able to convert the contested dunk.

“I’ve always kinda had the mindset [that] whenever I get the ball, [I] try to dunk it,” Swanton-Rodger said. “I didn’t think [Dickinson] was gonna jump at first but he did and that was a great feeling, seeing my teammates cheering me on.”

“We were just waiting for that moment in a game and it happened tonight,” Hakim Hart said.

Swanton-Rodger, while not vital down the stretch in Maryland’s success against the Wolverines, finished with four points, three rebounds and a block in the Terps’ win and played an important role in filling in for Julian Reese.

[Tony Perkins, Kris Murray too much for Maryland men’s basketball in 81-67 loss to Iowa]

Patrick Emilien remained out of the lineup with an ankle injury that prevented him from giving Reese a breather or keeping the sophomore out of foul trouble at times.

Reese picked up two fouls in the first half and had fouled out in Maryland’s last game against Michigan, so Swanton-Rodger served as a preventative measure to stop the Terps from having to worry about Reese leaving the game early again.

“I think Caelum’s seven minutes were probably the most important seven minutes we had all season,” coach Kevin Willard said. “He was just being big and physical in there and just making it as tough for [Dickinson] as possible.”

Willard said that Swanton-Rodger has “been progressing nicely,” and the freshman has averaged seven minutes per game in Maryland’s last four contests after starting the season averaging just over two minutes a game.

With Emilien’s status still unknown, Willard said Swanton-Rodger “is going to have to play” important minutes backing up Reese, and the freshman will hope to expand on one of Maryland’s most iconic plays so far this season.