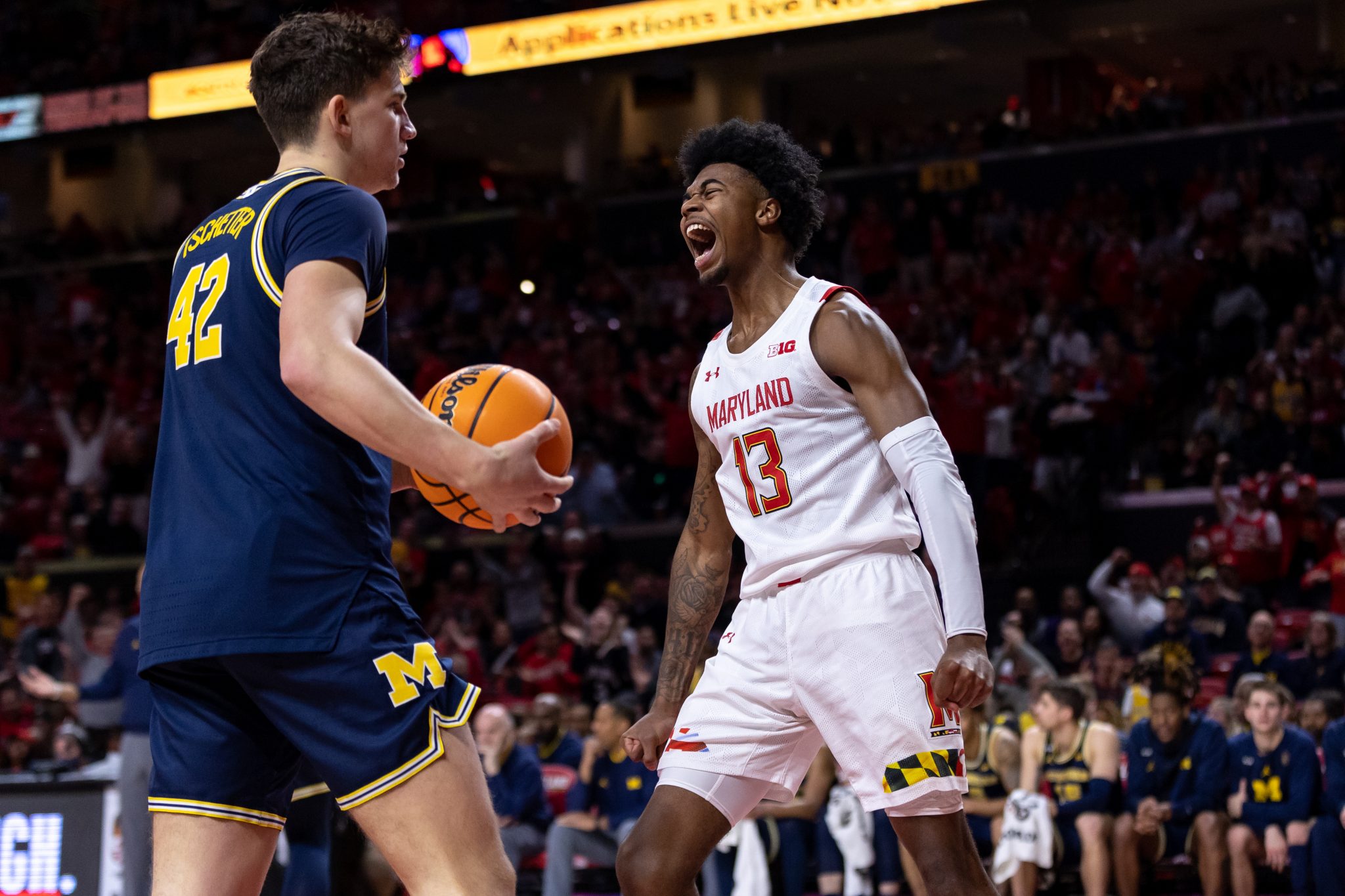 Maryland men’s basketball started 2023 in the worst possible way against Michigan on Jan. 1, finding itself down by 18 points before it even scored a field goal in the Terps’ largest-ever Big Ten loss.

But coach Kevin Willard’s squad (12-6, 3-4 Big Ten) got off to a much better start on Thursday and used its early advantage to exact revenge on Michigan (10-8, 4-3 Big Ten) at the Xfinity Center and split the regular-season series, 64-58.

A second-chance Don Carey three-pointer gave the Terps an early lead after a Hunter Dickinson jumper started the scoring. The home squad drove to the basket and routinely capitalized on their own missed shots, notching 11 first-half points from 10 first-half offensive rebounds.

Willard’s squad finished the game with 15 offensive boards, tied for their second-largest total of the season. The Terps also outscored the Wolverines 42-22 in the paint as they won their fourth straight home game.

“Maryland was the most aggressive team, not just in the second half but throughout the game,” Michigan coach Juwan Howard said. “You look at the amount of points they scored in the paint … and then also 15 offensive rebounds, it’s tough to win at any level of play … when you allow a team to beat you up like that in the paint.”

Jahmir Young jump-started an 8-0 Maryland run with a fastbreak layup and continued to convert from close range. He led all players in first-half scoring with 11 points, eight of which came at the basket, and finished with a game-high 26 points on 9-for-19 shooting from the field.

[Tony Perkins, Kris Murray too much for Maryland men’s basketball in 81-67 loss to Iowa]

The Terps looked like they might struggle with a height disadvantage exacerbated by the absence of Patrick Emilien, who participated in pre-game warm-ups but missed his second straight game with an ankle injury.

Dickinson dropped 32 points and 12 rebounds in Maryland’s New Year’s Day loss and entered Thursday averaging 17.6 points and eight rebounds per game in his last five matchups against the Terps.

But in the first half, Maryland outrebounded Michigan 20-15 and kept Dickinson relatively quiet until he hit two late threes to finish the first ten minutes with 10 points. The Wolverines’ center finished with 19 points and 10 rebounds.

Freshman Caelum Swanton-Rodger filled Emilien’s role as Julian Reese’s replacement off the bench and played seven minutes in the first half. He converted a contested layup and then added a slam over Dickinson that brought a roar from the Xfinity Center crowd.

A Donta Scott three-pointer midway through the first half extended the Terps’ lead to 13, their largest of the game, but the Wolverines fought back with their own assault from behind the arc. Five of Michigan’s six last made field goals of the half were threes and cut Maryland’s halftime lead to just two points.

Young continued to carry the scoring load of a Terps team that slowed on the offensive end to start the second half, going almost five minutes without a field goal. He scored six of Maryland’s first eight points of the third quarter with a pair of layups and two makes from the free throw line.

“[Young’s] gotten comfortable playing with the length and size he has to go against every night,” Willard said. “It’s a big adjustment seeing the centers he sees, the coverages he sees, I just think he’s starting to get a little bit more comfortable with not settling to be on the perimeter.”

The Wolverines used that cold spell to come back and tie the game eight minutes into the half on a Terrance Williams II fastbreak layup, but the Terps regained their advantage with a Julian Reese hookshot jumper. Their shots began to fall, making six of their next seven field goal attempts.

Maryland again grew its lead to double digits during a three-and-a-half minute Michigan scoring drought, but Dickinson’s third three-pointer of the night with four minutes remaining ensured a close finish.

Dickinson grabbed an offensive rebound and converted the put-back layup with 40 seconds remaining to cut the Terps’ lead to four. The Wolverines elected to foul Jahmir Young and send the guard to the foul line on the ensuing possession.

Maryland’s leading scorer sank both attempts from the charity stripe and a combined three desperation three-point attempts from Jett Howard and Dug McDaniel only found the rim, ensuring the Terps their third Big Ten victory of the season.

“I’m pretty happy with where we are considering the fact that we’ve had the hardest conference schedule in the league, I mean, it’s not even close,” Willard said. “So for us to battle and be where we are, this team has showed a lot of heart and a lot of grit.”