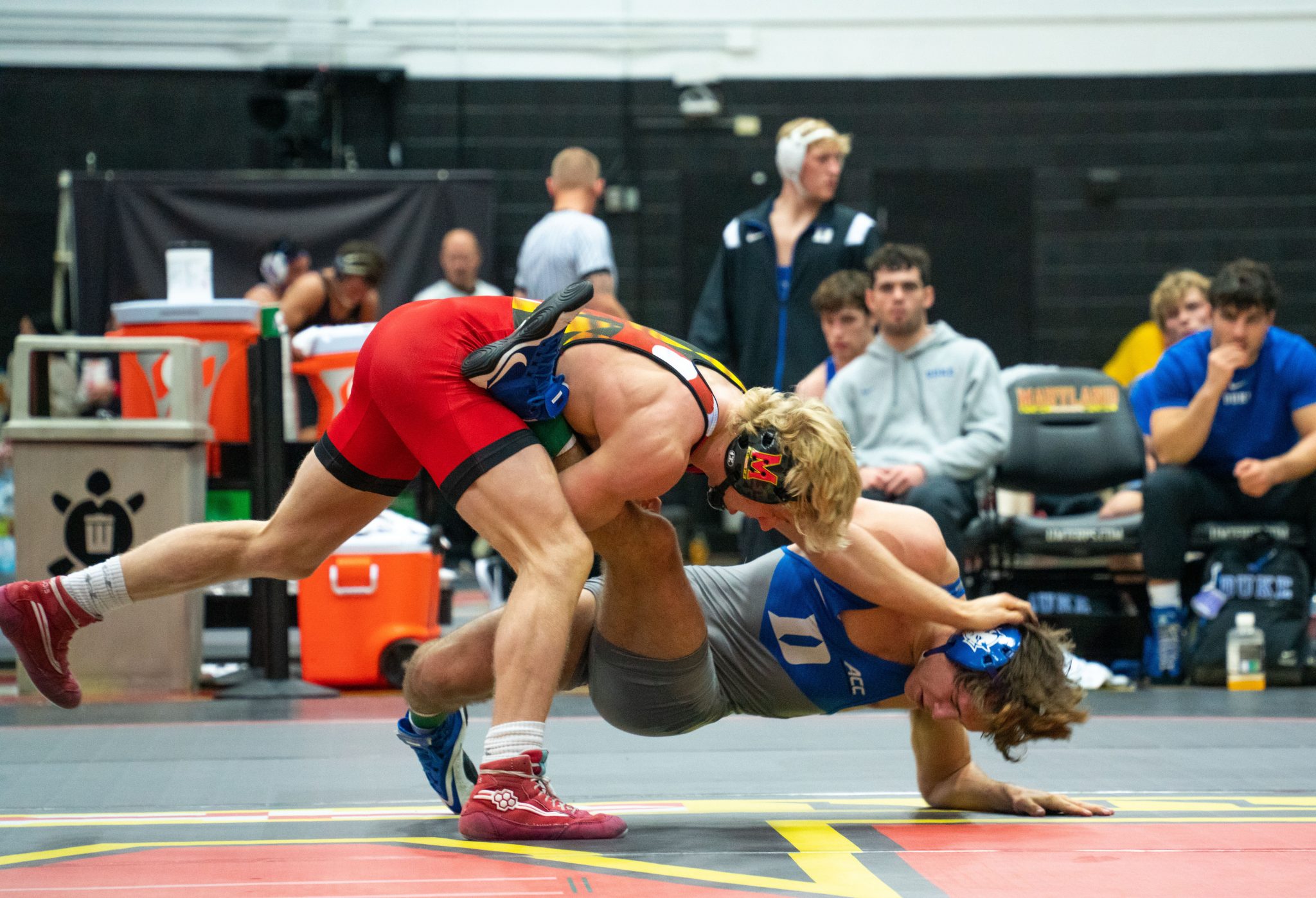 As Maryland wrestling’s once healthy lead against Virginia slipped away, Jaron Smith stepped up.

Maryland’s eighth year leader knew he had to secure a win in the heavyweight bout to win the dual for the Terps and avoid a two loss day at the Virginia Duals. Up 16-7 with just three bouts to go, the Terps looked like they would run away from the Cavaliers.

But a major decision loss by Chase Mielnik and a loss by Jaxon Smith brought the team score to within two heading into the final bout, 16-14.

So, with the pressure of a winner take all final bout, Smith jumped all over Virginia’s Colden Dorfman early. Taking a sizable lead into the second period, Smith flipped Dorfman onto his back and scored his first pin of the season, ending the bout halfway through.

The gritty victory was the hallmark moment of Day Two of the Virginia Duals for the Terps. After falling to Campbell earlier in the day, 21-14, Maryland grabbed a 22-14 win over Virginia, its old ACC rival.

Maryland has looked at No. 23 Braxton Brown all season to give the Terps a good start at 125-pounds, and he delivered again against Campbell.

Brown racked up two takedowns, an escape and over three minutes of riding time through the first two periods. He was able to ride out the remaining time in the third to earn a 9-4 decision.

Conner Quinn dropped his bout at 133-pounds by a tech fall and No. 33 Kal Miller forced overtime in his bout before surrendering a takedown in the extra period to drop his bout by a 4-2 decision.

With Maryland’s early 3-0 advantage now an 8-3 deficit, the Terps went on a run.

No. 28 Ethen Miller left it close late, but seven points in the third period from two takedowns and two escapes, plus the riding time point, secured the Terps’ first bonus points of the bout as Miller grabbed a 10-1 major decision.

No. 33 Michael North followed Miller with a 5-0 decision, and Dominic Solis won his second bout of the weekend with a 24-10 major decision. Maryland’s early 8-3 hole had flipped to a 14-11 lead.

Chase Mielnik fell in his 184-pound bout by a major decision, giving up a key bonus point to swing the team score advantage back in Campbell’s favor, 15-14, heading into the final two bouts of the dual.

At 197-pounds, No. 11 Jaxon Smith couldn’t get anything going offensively. Taking the bout to overtime, Smith conceded a takedown and lost the bout by a 8-6 decision as Campbell stretched their lead to 18-14.

Campbell would hand Maryland its first loss of the weekend with No. 30 Jaron Smith falling to No. 12 Taye Ghadiali by a slim 3-2 decision.

Looking to rebound following its first loss of the weekend, the Terps again got a spark from Brown at 125-pounds against Virginia, who won his fourth bout of the weekend with a 9-0 major decision.

[No. 22 Maryland wrestling loses heartbreaker to Indiana on tie-breaking criteria, 17-16]

Quinn suffered his second loss of the day and fourth loss over the two days with a major decision defeat, but once again the loss paved the way to a big Maryland run over the middle weight classes.

Kal Miller took control in the third period of his 141-pound bout, scoring an escape and a takedown to earn a 7-3 decision.

Then came Ethen Miller, who was locked in a tight contest as the final seconds ticked down in the 149-pound bout.

With his bout tied at 1-1 after trading escapes with Michael Gioffre, Miller made one last ditch effort to avoid overtime. Grabbing the leg of Gioffre, Miller threw the Cavalier wrestler to the mat, and with just two seconds left, Miller completed the takedown to secure a 3-1 decision win before Michael North took the mat.

North fell behind early in his ranked bout to No. 26 Jake Keating after suffering a takedown and two near fall points, but the third period was North’s. After climbing all the way back to tie the bout at 8-8 in the third and send it to overtime, North completed the comeback with a sudden victory takedown, taking the bout by a 10-8 decision.

With Maryland leading 13-4, the Terps and Cavaliers traded the next three bouts.

John Martin Best lost at 165-pounds by a close 3-1 decision in overtime, but Solis followed with a 3-1 decision victory after a third period takedown. After Mielnik dropped his 184-pound bout by major decision, Maryland carried a 16-11 lead into the final two bouts of the dual.

Jaxon Smith lost in overtime to put the pressure on Jaron Smith, but the eight-year veteran dominated his bout to send the Terps home with their eighth win of the season.