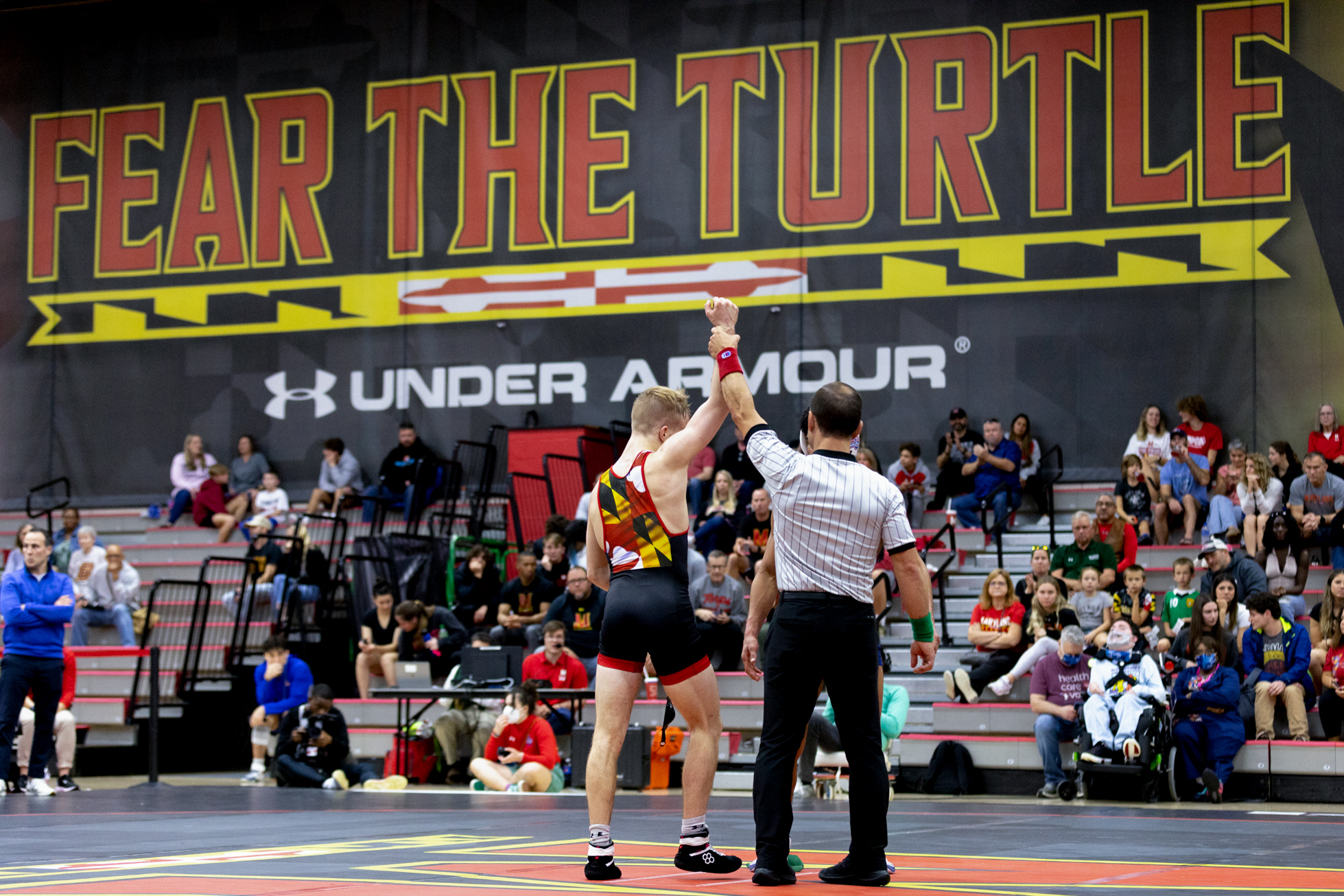 Braxton Brown gets his hand raised in victory during Maryland wrestling's 29-10 win over American on Nov. 5, 2022. (Riley Sims/The Diamondback)

With Oklahoma having a one-point lead in Maryland wrestling’s first bout at the Virginia Duals, the Terps looked to their 197-pounder Jaxon Smith to provide a spark.

Up against the Sooners’ Seth Seago, Smith asserted his dominance from the start. In the opening three minutes, Smith had scored multiple takedowns and added four near fall points to jump out to a 9-1 lead.

Smith’s superiority continued into the second period. He flipped Seago onto his back for a pin midway through the period.

Using Smith’s bonus points from the pin, Maryland was able to defeat Oklahoma 18-16, winning its first of two duals on Day One in Hampton, Virginia.

Maryland once again leaned on Smith to secure their second victory of the day. With their once large lead shrunk to just three, the redshirt freshman secured his second pin of the day and guaranteed a Friday sweep for the Terps, who downed Ohio 27-13.

Up against No. 11 Joey Prata, No. 23 Braxton Brown wasted no time gaining an early advantage against Oklahoma at 125 pounds. He scored an early takedown in the first period and added two near fall points later in the period to take a 4-1 lead in the bout.

After a scoreless second period, Brown was able to ward off late attacks from Prata in the third, securing a 4-1 decision victory.

Following Conner Quinn and No. 33 Kal Miller’s losses, Ethen Miller looked to right the ship for the Terps.

[No. 22 Maryland wrestling loses heartbreaker to Indiana on tie-breaking criteria, 17-16]

In a tightly fought bout, Ethen Miller was only able to earn an escape point against No. 13 Mitch Moore. However, 1:53 of riding time Ethen Miller accumulated in the second period proved the difference, as he earned the riding time point and secured a 2-1 decision. The upset victory brought the team score within one, a 7-6 Oklahoma advantage.

At 174 pounds, Dominic Solis looked to have a 4-3 decision wrapped up as the third period came to a close. But No. 24 Darrien Roberts was awarded an escape in the closing seconds to send the bout to overtime.

In the sudden victory round, Solis was patient. He saw an opening and dove at Roberts’ feet, taking him down and securing a 6-4 decision to put Maryland up 12-10.

Chase Mielnik was unable to extend that lead after losing his bout to Tate Picklo by a 3-2 decision. Oklahoma held a 13-12 lead after eight bouts.

But as they have been able to all season, they relied on No. 11 Jaxon Smith, who had complete control of his 197-pound bout against Seth Seago from the start.

Smith secured multiple takedowns and scored four near fall points to build a 9-1 lead after the opening period.

The second period featured more Smith dominance. Midway through the middle frame, the Terps’ 197-pounder flipped Seago onto his back and secured the pin, his fourth of the season.

The dominant victory by Smith secured massive bonus points for the Terps, as Maryland had a 18-13 advantage heading into the heavyweight bout.

No. 19 Josh Heindselman beat Maryland’s No. 30 Jaron Smith in that bout. But Smith avoided a major decision, securing an 18-16 victory for Maryland.

Entering the second dual of the day against Ohio, Maryland once again started fast with Brown at 125-pounds.

Midway through the second period, Brown picked up his fourth pin of the season over Oscar Sanchez, paving the way for a dominant second dual for the Terps.

Miller forced overtime at 141-pounds by securing the riding time point, and in sudden victory he grabbed the legs of Kryan Hagan, scoring a takedown and winning the bout by a 5-3 decision.

Ethen Miller followed with a hard-fought 2-0 decision of his own as Maryland extended their lead in the team score to 12-3. North made it four wins from the first five bouts against the Bobcats after earning a 12-0 major decision and extended Maryland lead to 16-3.

But Ohio would not go away.

Best, Solis and Mielnik all dropped their bouts in succession, bringing the team score to within three at 16-13.

But two big wins by the Terps’ heavyweights would be enough to pull away from Ohio, as Maryland matched its Day One performance from last year’s event with two wins.