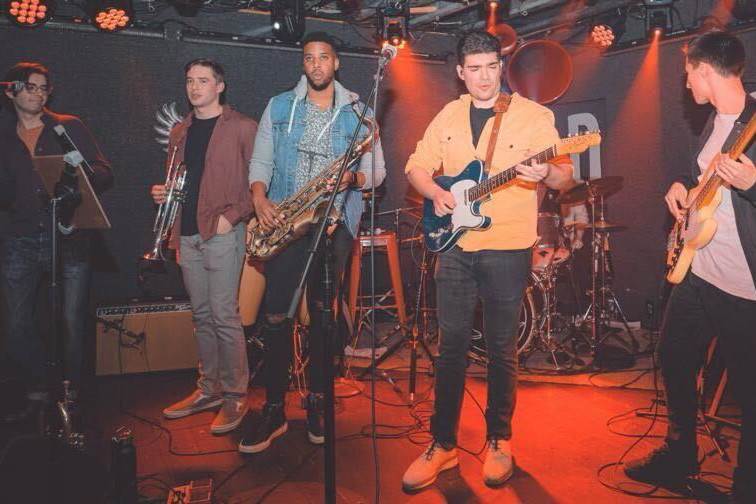 Concertgoers bubbled with anticipation waiting for Strutman Lane to take the stage at DC9 Nightclub on Saturday. Their performance came following the opening act MLLN, whose setlist full of neo soul and R&B set the tone perfectly for the rest of the night.

From the moment Strutman Lane took the stage, the audience members couldn’t contain their excitement as the charismatic group gave exciting and deservedly long introductions to each member on stage.

Even with technical difficulties, the band prevailed and performed with a type of excellence that made it all worthwhile. Some elements of the concert were theatrical and, quite frankly, charming.

Opening with their track “Space Funk Jam,” we were quickly affirmed of their impressive musical talents. Christopher “Doc” Lawerence blew us away on the tenor saxophone. We simply could not get enough of the musical magic coming out of Lawrence’s horn quicker than you could imagine.

This solo soon passed seamlessly to lead vocalist and guitarist Adam Landa, who laid it down again, only to pass it on to keyboardist Jack Gruber, who ripped the keys to shreds with wicked and scalar improvisation all night.

Landa demonstrated incredible musical prowess from reaching into falsetto to burying his voice into a low range with a raw edge. He had us singing songs that were familiar and taught us some we didn’t know. Either way, he found a way for us to belt our hearts out, which is essential for a smaller band that is quickly making itself known.

The energy was restless, continuously moving and fervent. The band was able to push and pull, navigating through tempos without ever breaking the form or structure. They did exactly what they needed to do to keep everyone dancing.

Kennan Spencer, the band’s drummer, never lost the groove and had people, including Landa, jumping along with him.

And on bass, Evan Williamson stayed glued to Spencer. Williamson effortlessly weaved through funky basslines that supported the group, propelling this passionate energy all night long. Somehow, this momentum never stopped for the entire hour and a half set.

Strutman Lane also premiered a handful of songs for us, promising a truly authentic and special performance just for DC9 that night. With every song came creative and exciting soloists who improvised effortlessly nearly every time. By the end of the night, the audience was itching to join the stage with the band.

The band also engaged with their audience in unique ways, such as having air dancers, the long and tall inflatable balloons that dance outside of a car dealership. They went further and had the most interesting interpretation of engagement I’ve seen with the use of disposable cameras. The band passed out disposable cameras to their listeners, encouraging us to take photos of their experience and return them at the end of the show.

But eventually, the band began to conclude its set. But the audience would not let them leave.

Surprisingly enough, the group finished with two more songs, sending the crowd into fits of exhilaration. The band delivered a promising finish with a cover of Earth, Wind & Fire’s “September.”

Despite it being the beginning of 2023, Strutman Lane had the crowd belting lyrics about the beloved ninth month of the year, sending us away with a fulfilled evening of new music from the most impressive artistry Washington, D.C., has to offer.