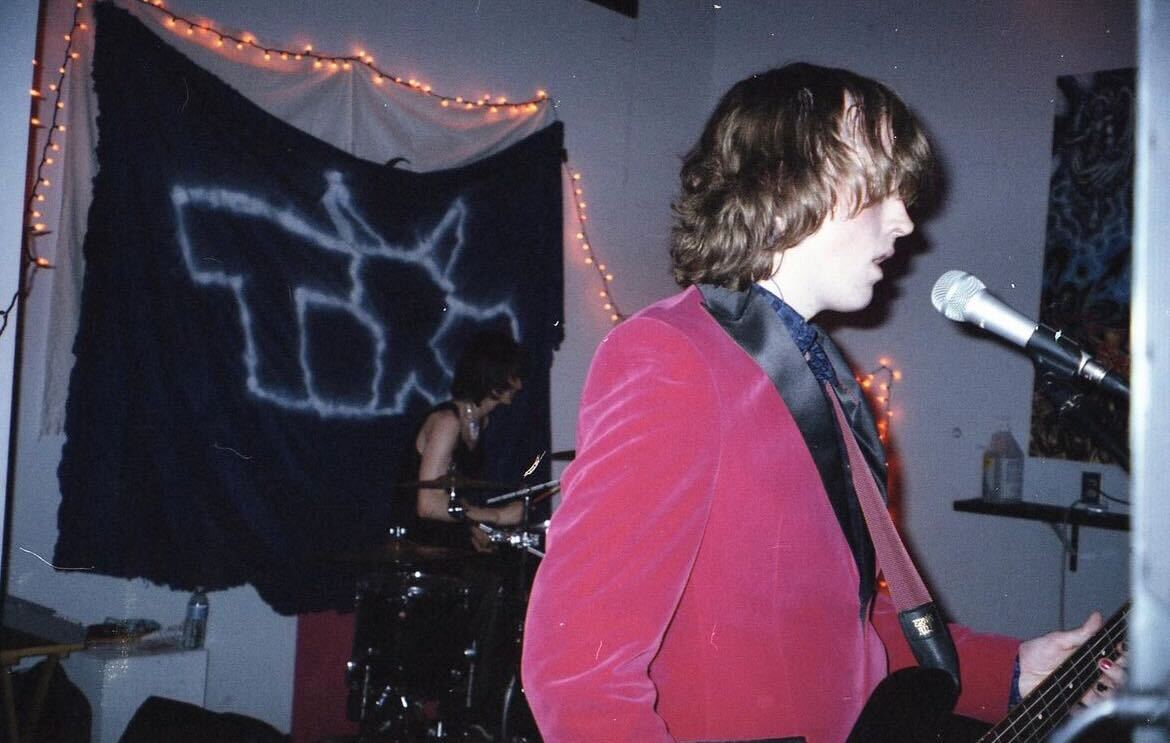 Members of the band TORO perform in Rockville on Jul. 30, 2022. (Photo courtesy of Koto Langa)

By Micaela Hanson
For The Diamondback

Sam Ingram’s bedroom in Wheaton, with its wood-paneled walls lined with vintage band tees and artwork drawn by friends, looks like the sort of place where any rock band of the last 60 years might practice.

The American University sophomore plays bass and sings vocals in the four-member ensemble that practices there, with the help of a few Monster energy drinks and a game of catch.

TORO’s sound slides in a genre somewhere between shoegaze, emo and punk.

“If you really sit back and listen to a TORO song and what’s going on in it, it’s just bullshit. But it sounds good,” said Juliana Soma Gibbins, a student at Montgomery College and TORO’s drummer. “I’ve never been more proud of some shit.”

Formed amid the pandemic from the remnants of two broken-up bands, TORO took its name from Jordan 4 Toro shoes.

Chris Guandique-Aguirre, a senior government and politics major at the University of Maryland, named many uniquely different artists as TORO’s musical infleunces. Those artists included Midwest-emo band American Football, Elvis Presley and Drug Church, a band that mixes hardcore with melodicism and punk.

The band members agreed that they sound like a combination of the bands My Bloody Valentine and Title Fight.

All of the band members’ unique experiences contribute to the hodge-podge of musical genres that make up TORO’s sound.

“When you take a lot of different influences from the outside, it turns into something a lot cooler. It sounds more fresh,” said 21-year-old Isaac Higgins, TORO’s guitarist.

Guandique-Aguirre recalls his father’s mariachi band as one of his main introductions to music. His father, who immigrated from El Salvador, was in a mariachi band during his youth. When his father came to the United States, he rekindled friendships that led him to a short-lived second stint in mariachi.

“I saw my dad watching the Yellow Submarine movie and I was just like, ‘Wow! This is really crazy,’” Ingram said. “But loving music has always been there.”

American Idol introduced Gibbins to the world of music. When she was growing up, her mother would host American Idol watch parties for the extended family. Like the other members of TORO, music was always something she gravitated toward.

As for the band’s lyrical philosophy, they try to keep it lighthearted. Their lyrics are meant to enhance the instrumentals, not to stand on their own as literary statements.

Ingram said their song “Tiger, Tiger” is about wine. He doesn’t have the lyrics written down for it, so the live version differs slightly almost every time. Ingram described TORO’s vocal style as abrasive and somewhat aggressive, but they still eloquently glide over their cascading melodies and tight bass lines.

TORO’s live shows are integral to understanding their music, but it hasn’t always been something that came naturally to them. Higgins and Guandique-Aguirre remember the first time TORO performed for an audience, in June at Grail Arthouse in Rockville.

[In a music dry spell? Try out these DBK playlist starter packs]

“The reaction from everybody was very overwhelmingly positive and on our last song,  we finished the set, everyone ran up to give us hugs. And it was really cool,” Higgins said.

As the band gains experience, they only get more comfortable performing. Their experience comes from playing more live shows, but also from consistent practice.

“I kind of always try to hide away in a corner,” Higgins said. “We’ve been playing a lot more than I anticipated lately, and it’s definitely pushed my stage fright aside.”

In 2023, TORO hopes to put out music that fully represents their sonic, lyrical and personal style.

The group’s dynamic mixes their casualness with the relentless work ethic of aspiring musicians. Gibbins said each practice lasts about two to three hours and is filled with part practicing their 45-minute set, part brainstorming and part “goofing off.”

Guandique-Aguirre said the band’s motto is the five F’s: “fitness, Frasier, football, Fluttershy and friendship.” Fitness, because Higgins and Guandique-Aguirre enjoy lifting. Frasier, because Ingram calls the 1990s-era sitcom “the most important piece of media, maybe ever.” Football, because Higgins used to play football and TORO loves to play catch. Fluttershy is Gibbins’ favorite My Little Pony character. And friendship is self-explanatory.

Now, TORO is focusing on upcoming performances and recording their first project. They will perform as support for Flowers for the Dead and Cuni at Quarry House Tavern on Dec. 13 and on Dec. 16 at a venue in Kensington.