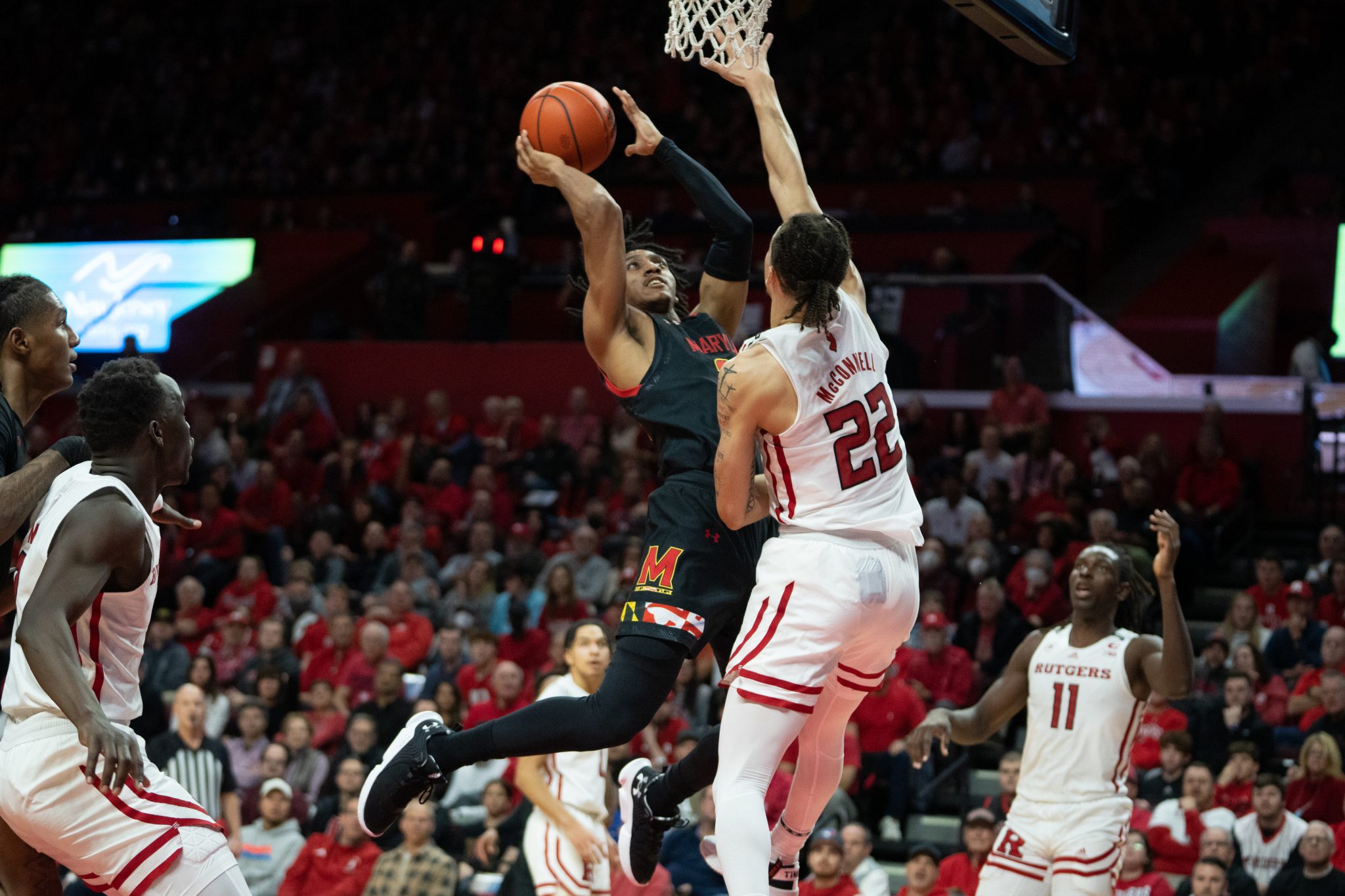 Jahmir Young trotted the ball to a commanding position at Rutgers’ half of the court before popping the ball over to Noah Batchelor, who then tossed it to Hakim Hart on his way by him.

Hart found no opening with the Scarlet Knights’ Clifford Omoruyi creeping up to block the lane. He tossed it back to Young at the arc, and he drove for a mid-range shot that had little chance with the imposing Omoruyi stuffing his attempt en-route to a shot-clock violation.

Rutgers had shaken Maryland men’s basketball to a rude offensive awakening on the Terps’ first possession of the game. It hardly got any easier for coach Kevin Willard’s team as they scored just 50 points in a loss on the road against the Scarlet Knights.

Rutgers is the best team in the Big Ten at forcing turnovers with just over 17 a game. Maryland’s turnover percentage against the Scarlet Knights — which represents the percentage of possessions on which the Terps turned the ball over — was 32.3 percent.

Maryland turning the ball over on almost a third of their possessions was the worst mark the Terps have had in a conference game since joining the Big Ten, according to KenPom.

“They’re long and athletic,” Young said of Rutgers. “They were in the passing lanes, we had a hard time taking care of the ball tonight.”

Turnovers have been a significant part of Maryland’s recent slide. The Terps are 1-4 when they turn the ball over 13 or more times and 9-1 when they don’t.

“A lot of our turnovers are just kind of, I hate to say nervous, but not playing under control, trying to make a little bit quick passes,” Willard said. ”We can’t have 45 assists and 75 turnovers in five games and think you’re gonna win a game.”

The offensive dysfunction displayed by Maryland against conference foes and larger nonconference opponents as of late is a stark change from an explosive 8-0 start that saw the Terps score more than 70 points in each game and cross the 40 percent mark from behind the arc three times.

In Maryland’s last five games against power conference opponents, the Terps have not crossed the 60-point mark.

In Maryland’s last five games against power conference opponents, the Terps have not crossed the 60-point mark.

One metric further expands some of the Terps struggles: assist-to-turnover ratio. The statistic attempts to analyze ball control with the assumption that more assists equals better passing, and turnovers indicate poor passing or ball control.

Maryland has the worst assist-to-turnover ratio in the Big Ten and only the 284th best in the nation at 0.88 assists per turnover.

There are some potential solutions to Maryland’s turnover and ball control problems. Jahari Long is the Terps’ best performer in that metric, and Willard said he’s been experimenting with playing Long and Young together.

Willard said there’s been some trouble with that because Long and Young are Maryland’s only usual point guards, and putting Long with the starters leaves the second team without a player at the position.

“Moving forward [playing Young and Long together] is definitely something we’re looking at,” Willard said.

Willard remains optimistic that his team will turn their offense around, and their first opportunity after a historically poor performance against Rutgers Thursday comes Sunday against No. 24 Ohio State at home.

“I have the utmost confidence in these guys,” Willard said. “We’ll get it going offensively, and I’m not so worried.”