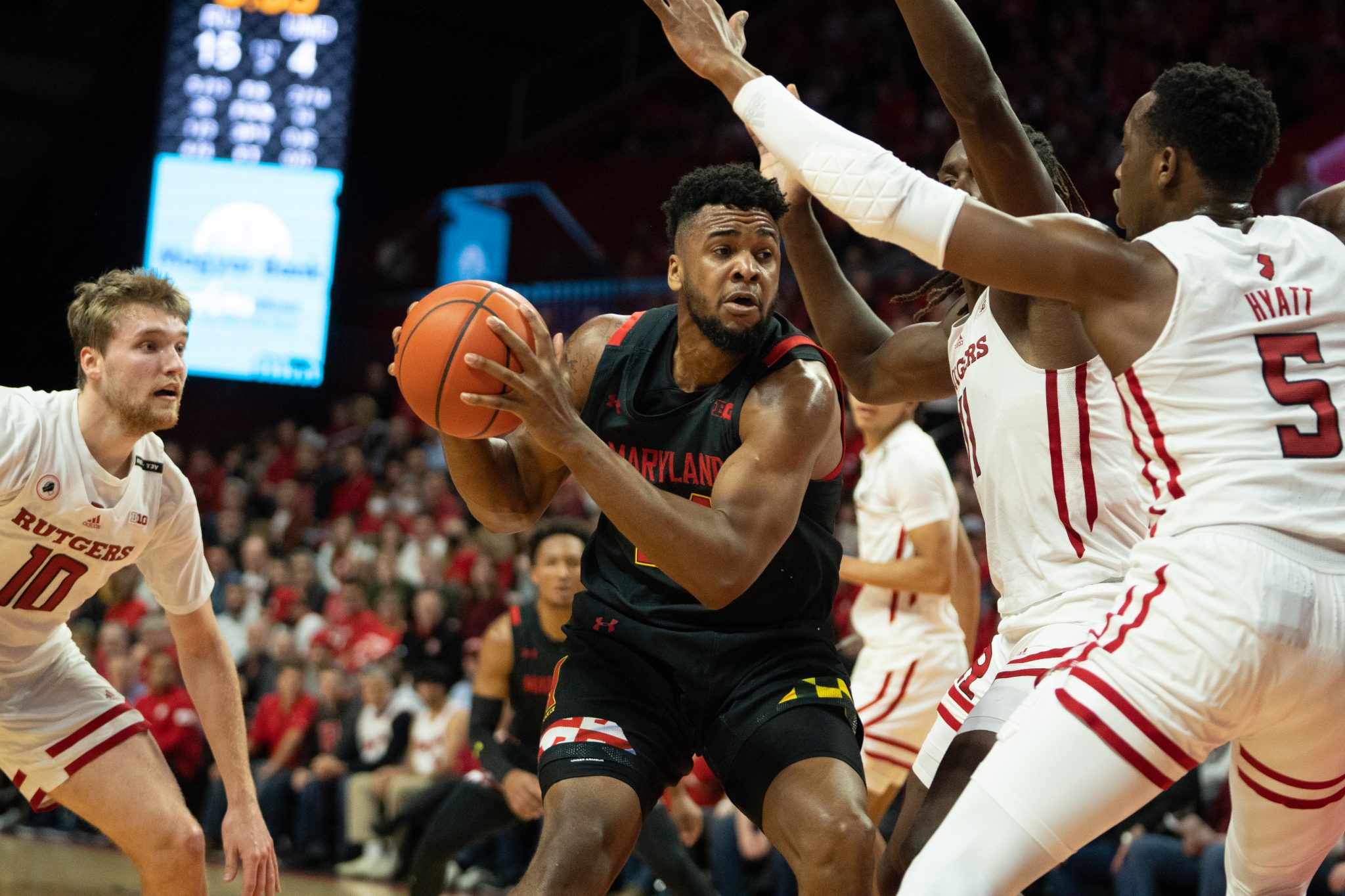 PISCATAWAY, N.J. — Maryland men’s basketball surely wanted to improve on a 13-point first-half performance against Michigan on Sunday that eventually led to a 35-point blowout loss.

On Thursday, the Terps only did four points better and struggled to score for multiple long stretches of its matchup against Rutgers as they fell to the Scarlet Knights, 64-50.

Maryland fell to 1-3 and dropped its third straight Big Ten game after it suffered its largest-ever conference loss since joining the Big Ten against the Wolverines Sunday while Rutgers improved to 3-1 in Big Ten play, adding on to its upset of No. 1 Purdue on the road on Monday.

“I would just say it’s our movement, whether that’s being physical and intimidating or just being predictable and not moving the ball side to side, we’ve been working on it,” Jahmir Young said.


Coach Kevin Willard trotted out the third different starting lineup of the season as wing Noah Batchelor made his first career start for the Terps in place of Don Carey.

The freshman didn’t make too much of an impact to start the game. He only played six scoreless minutes in the opening half as layups from Julian Reese and Donta Scott gave the Terps a quick 4-0 lead. However, the Terps’ recent offensive troubles quickly returned as they missed 11 straight field goals and didn’t score for almost nine minutes.

Rutgers embarked on a 15-0 run while preventing Maryland from creating anything offensively to take a double-digit lead 10 minutes into the game. The Terps suffered another six-minute scoring drought toward the end of the half and finished the frame shooting just 25 percent from the field with 12 turnovers.

“I see them drain shots all the time,” Willard said. “I think [the players] have more stress [about making shots] than me because I wouldn’t let them let it fly if I didn’t believe in them.”

Maryland’s defense kept it in the game. The Terps forced nine turnovers and held the Scarlet Knights to 24 first-half points — only four of which came from center Clifford Omoruyi, an encouraging sign after Maryland’s struggles with Michigan’s Hunter Dickinson Sunday.

“That’s the best Julian’s looked in a long time,” Willard said. “It looks like he’s back from those 12 days he missed. His legs look like they’re there. I thought his pick and roll defense was excellent. I thought he battled all night with [Omoruyi].”

Willard’s squad scored their first three three-pointers of the game in the final three minutes of the half. Two came from Carey, which cut Rutgers’ advantage to just seven at halftime. Maryland still only mustered 17 points in the first frame, its fourth straight game against a power conference team scoring 20 points or less in the first half.

The Terps established themselves in the paint on offense for the first time all game to start the second half with Young, Julian Reese and Donta Scott getting close-range shots to fall.

A contested Young layup that resulted in an and-one opportunity got Maryland within four points of Rutgers, but the Scarlet Knights’ tough defense near the basket quickly returned.

Another Terps dry spell of over four minutes ensued — one Rutgers used to put the game out of reach. A 17-3 Scarlet Knights run powered by six points from Paul Mulcahy gave Rutgers an 18-point advantage with just under nine minutes to go

Mulcahy — who finished with a game-high 15 points on perfect 6-for-6 shooting from the field — punished the Terps on one of their season-high 20 turnovers during Rutgers’ run, forcing a flagrant foul from Reese after poking the ball away on a Maryland inbound.

Young hit two threes in the second half and finished the game with a team-high 13 points, but it was too late as Maryland failed to chase down a Scarlet Knights lead that was too large to overcome.