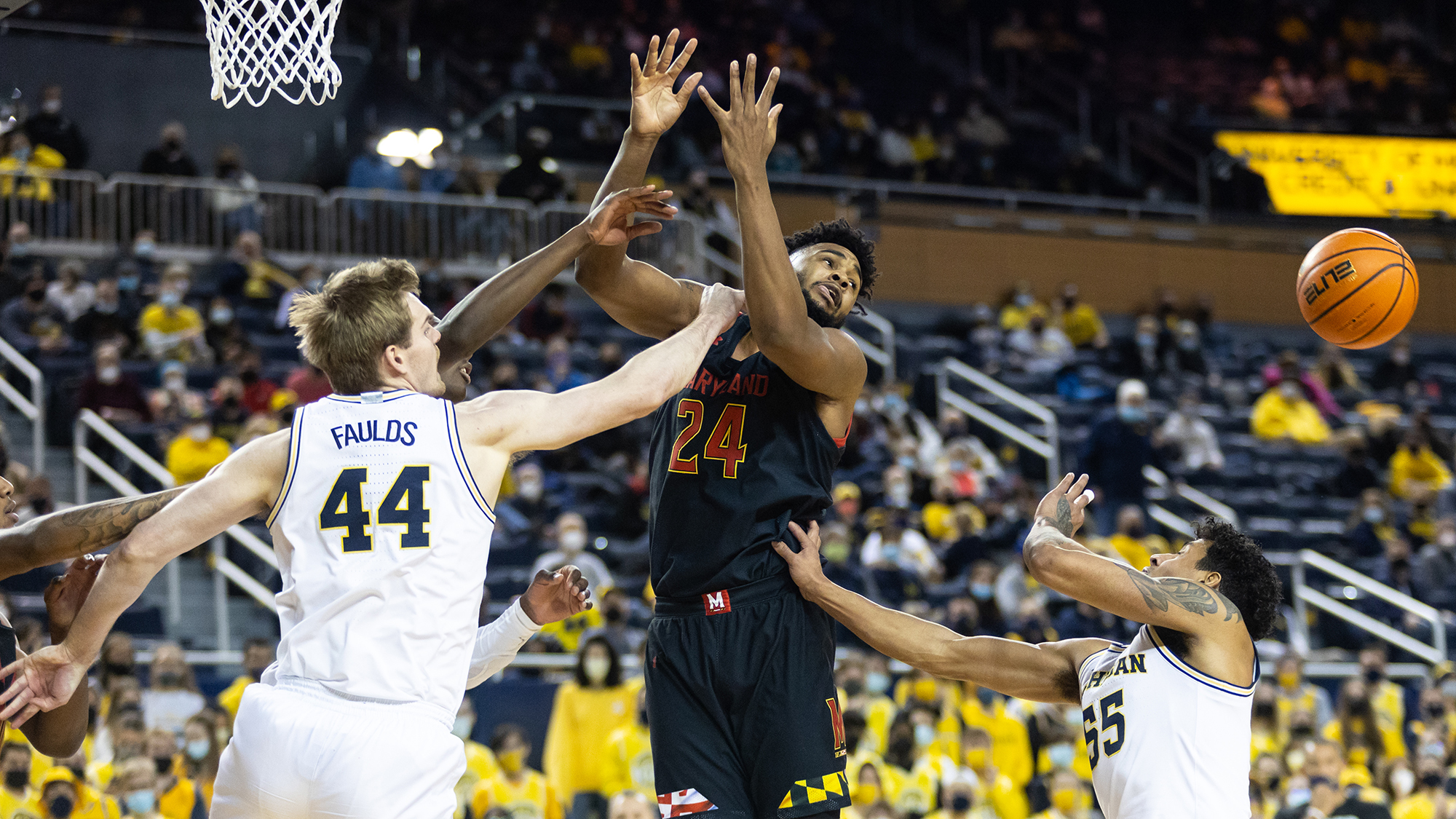 A defender knocks the ball away from Donta Scott during Maryland men's basketball's 83-64 loss to Michigan on Jan. 18, 2022. (Julia Nikhinson/The Diamondback)

Michigan’s Hunter Dickinson made a name for himself just a couple of miles away from Maryland’s campus. The Terps missed out on the 7-foot-1 center as the Wolverines nabbed him in the 2020 recruiting class.

Jahmir Young played with Dickinson at DeMatha Catholic in Hyattsville. He watched from the bench with Maryland struggling with and without its starters as Dickinson poured more and more onto the Terps at the beginning of the second half — finishing with a resounding 32 points and 12 rebounds.

Dickinson’s imposing frame and powerful play hammered Maryland men’s basketball into submission as Michigan steamrolled the Terps 81-46 to force their second straight conference loss and their largest ever defeat in the Big Ten.

It wasn’t Dickinson alone that topped Maryland, but his physicality rippled through the rest of the Wolverines against the Terps. Michigan out-rebounded Maryland, 49-30, and found a majority of its points in the paint.

The Terps met their harsh welcome from Dickinson and his squad in Ann Arbor right from the beginning of the Big Ten matchup.

The Wolverines won the tip, and immediately shifted to Dickinson for their first score of the game. The center had a size advantage over the 6-foot-9 Julian Reese, and it showed as Dickinson made his first five shots from the field.

The Terps looked flustered on offense to boot and missed their first 10 field goal attempts — failing to score a point for almost the first six minutes of the game. The disastrous mix of Maryland’s ineptitude on offense and Michigan’s dominance in the interior quickly buried the Terps in a deficit that ballooned to 44-13 at the end of the first half.

Some defensive momentum from Maryland prompted by a slowdown in Dickinson’s production gave the Terps an opportunity to surge forward near the end of the frame, but it wasn’t close to enough. Dickinson’s play picked up, and he finished with 18 first-half points, more than Maryland as a team in the first half.

Coach Kevin Willard noted after the game that he would have to make “major changes” and that he might “have to tear everybody down after this.” He knocked the team’s toughness and effort in the game, but said the second-string only came out to potentially ignite the offense.

“They just can’t come out and play like that,” Willard said.

The coach made the decision to sit most of Maryland’s usual starters, except Don Carey, to start the second half. Reese came in as Patrick Emilien fouled out with just over 14 minutes remaining, but Young, Donta Scott and Hakim Hart stayed on the bench until almost halfway through the second half.

Jahari Long provided a marginal scoring boost for the Terps, but Michigan and Dickinson remained firmly ahead. With both teams riding their reserves in the closing minutes, the Wolverines easily maintained a significant lead as the Terps set season-lows in points scored, field-goal percentage and rebounds allowed.

Willard commended the bench’s effort as they sparked some offense in the second-half with a 33-point effort as Long led Maryland with nine points overall.

The final seconds, fruitless for Maryland and without meaning, drilled home a harsh reality for the Terps in 2023 — Big Ten play could cause significant hardship for Willard’s new squad.