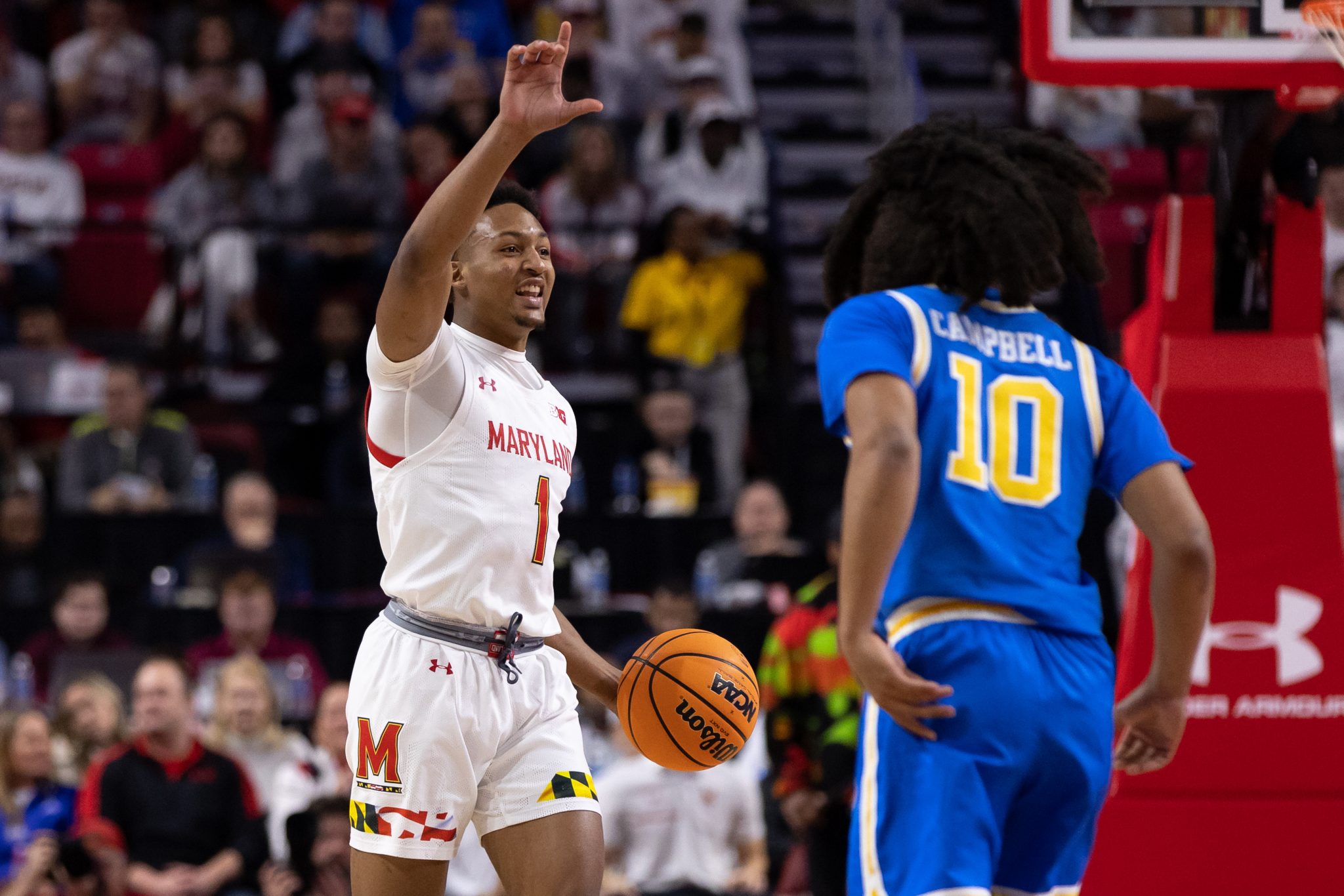 Don Carey watched from the corner as his arcing three-point shot fell through the nylon, a sight he was already familiar with against the Retrievers Thursday night, despite his troubles from behind the arc so far this season.

The Georgetown transfer knocked down five of his seven attempts from deep as Maryland men’s basketball (10-3) pulled away from UMBC (9-5), 80-64, in its final regular-season nonconference matchup and last game of 2022.

The Terps remained undefeated against their in-state rivals, improving to 15-0 in their first game against the Retrievers since 2017.

“It definitely feels good to see [a three-point shot] go in, but in terms of my demeanor and how I’ve been consistent with that, I know the type of player I am, I know the type of work I’ve put in and I know how practice goes as well,” Carey said. “So eventually, you know, the work will show.”

Maryland continued their first-half shooting struggles from behind the arc after going 3-for-12 from deep in the opening 20 minutes in their last matchup against Saint Peter’s on Dec. 22.

The Terps started 0-for-10 from three-point range until Carey finally found the bottom of the net with just over two minutes left in the first half. Maryland finished the half 1-for-14 from behind the arc while the Retrievers made four of their 12 attempts.

Instead, the Terps relied on inside scoring to rally from a small early deficit. UMBC’s advantage grew as large as six in the first half, but an almost six-minute field goal drought and a 14-1 Maryland run saw coach Kevin Willard’s squad retake the lead.

Jahmir Young and Hakim Hart spearheaded Maryland’s offense in the opening 20 minutes and both converted on tough and-one opportunities as they found success driving to the basket. The duo combined for 21 points on 8-for-15 shooting in the first half, with five of those seven misses coming from behind the arc.

Young and Hart finished the game with 18 points and 16 points, respectively. The duo shot a combined 12-for-15 from two-point range.

Tra’von Fagan and Jacob Boonyasith helped the Retrievers end the frame on a 8-3 run that cut the Terps’ lead to three, but Maryland maintained a 33-30 advantage at the break.

The in-state rivals traded blows to begin the second half, with a quick 6-0 Terp run sparked by a driving layup from Young that gave Maryland its largest lead of the night nullified by back-to-back UMBC three-pointers.

“Sometimes in transition we just get a little trigger happy and we stopped doing what we were doing well,” Willard said. “Coming out [of halftime] the first play we just wanted to make sure we got something going inside with Jahmir driving, so Jahmir really kind of set the tone.”

But while Willard’s squad continued to miss the mark from behind the arc, Julian Reese’s presence near the basket helped the Terps get to the line.

Reese returned to the floor early on in his first appearance since exiting with a shoulder issue during Maryland’s loss to UCLA on Dec. 14. Although Patrick Emilien earned his second straight start, Reese finished with seven points and seven rebounds in 23 minutes. All of his points came from the free throw line in the second half, where he shot 7-for-12.

The Terps shot a season-high 32 total free throws throughout the game — crucial shots in the 16-point win.

“That overall changed the game for the team and I feel like that built momentum and got us into the bonus and eventually got other guys to the line as well,” Reese said.

Hart became just the second Maryland player to knock down a three-pointer with just over 10 minutes left in the game to restore the Terps’ nine-point advantage, one that grew to double digits for the first time all game when he drained two free throws soon after.

Carey put on his best shooting performance in a Maryland uniform despite the Terps’ struggles, finishing the contest five-for-seven from deep to tie his career-high.

“I wish I had his confidence as a player,” Willard said of Carey.

The guard finished with a season-high 19 points, with four of his makes from behind the arc coming in the second half. The Georgetown transfer came into the game shooting 23.5 percent from three and 30.1 percent from the field this season.

The Terps won their tenth game of the season and aim to continue their win streak when they renew Big Ten play with a trip to Michigan on New Year’s Day. The Wolverines fell to Central Michigan at home in a 63-61 loss Thursday.