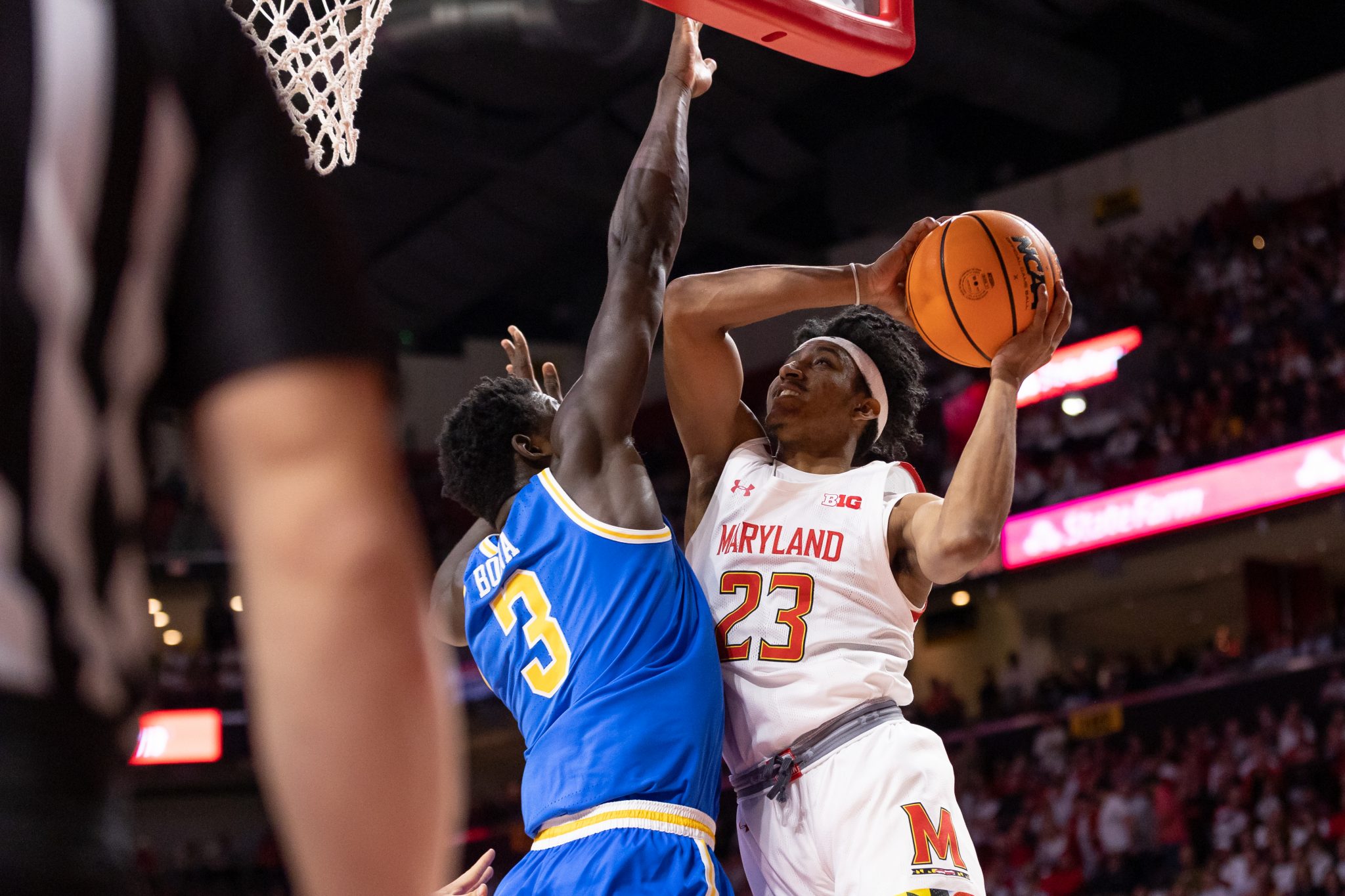 Last year’s Cinderella squad Saint Peter’s, who had been deconstructed in the offseason as its coach and top two leading scorers left for other opportunities, provided an opportunity to point the Terps in the right direction.

But without an injured Julian Reese, coach Kevin Willard had to innovate. Patrick Emilien and Ian Martinez took the floor as starters for the first time this season as they replaced Reese and Don Carey, respectively. Thursday’s game featured only the second different starting lineup Maryland’s trotted out in 12 games.

The usual reserves helped guide the Terps to a convincing victory as Emilien recorded a team-high plus-minus of plus-39 and a season-high 10 points, while nine other players racked up 10 or more minutes of playing time. Maryland looked decidedly different from their usual starter-leaning lineup.

Willard said an emphasis for the matchup was to start Martinez in place of Carey so that the Georgetown transfer would be available to go in with the rest of the reserves once the usual starters tired. He theorized that the switch could help reduce the drop-off between the starting lineup and the reserves, a transition that he said has widened deficits at times this season.

The coach mentioned that he doesn’t usually change the starting lineup because he thinks unit cohesion is important and playing the same players together develops that. However, he thought Maryland’s recent problems necessitated it.

“It was just me trying to tinker a little bit just seeing if the drop-off wouldn’t be as big as it’s been,” Willard said.

The change didn’t seem to reinvigorate the offense much initially, but a strong push near the end of the first half gave the Terps a 35-19 advantage at the break and eventually resulted in a 30-point victory.

Martinez acknowledges his role is to prevent a slow start for Maryland on defense and to give time for the Terps’ offense to come along. Those slow starts have been an immense issue for Willard’s squad over the past three games as they’ve averaged just more than 22 points in the first half.

“I think that’s my job [to] speed up the game, get a little energy going,” Martinez said.

The former Utah transfer has been the Terps’ most productive bench player this year and was a major contributor against UCLA with a season-high 16 points. He’s also recorded a better offensive rating than Carey so far this season, and the gap grows within Maryland’s two conference games, according to KenPom.

The matchup against Saint Peter’s provided Willard an opportunity to tinker with the lineup and rotation while providing a chance for Martinez and others to develop in lower-stakes conditions.

“[I wanted to] just kind of give a chance to guys that have been practicing hard and working hard to get out a play a little bit in an environment a little less stressful than playing Wisconsin, Illinois, Tennessee and UCLA,” Willard said.

Maryland’s matchup against UMBC on Dec. 29 could provide the Terps with another opportunity to do the same before they kick off a menacing stretch on the road at Michigan on New Year’s Day.