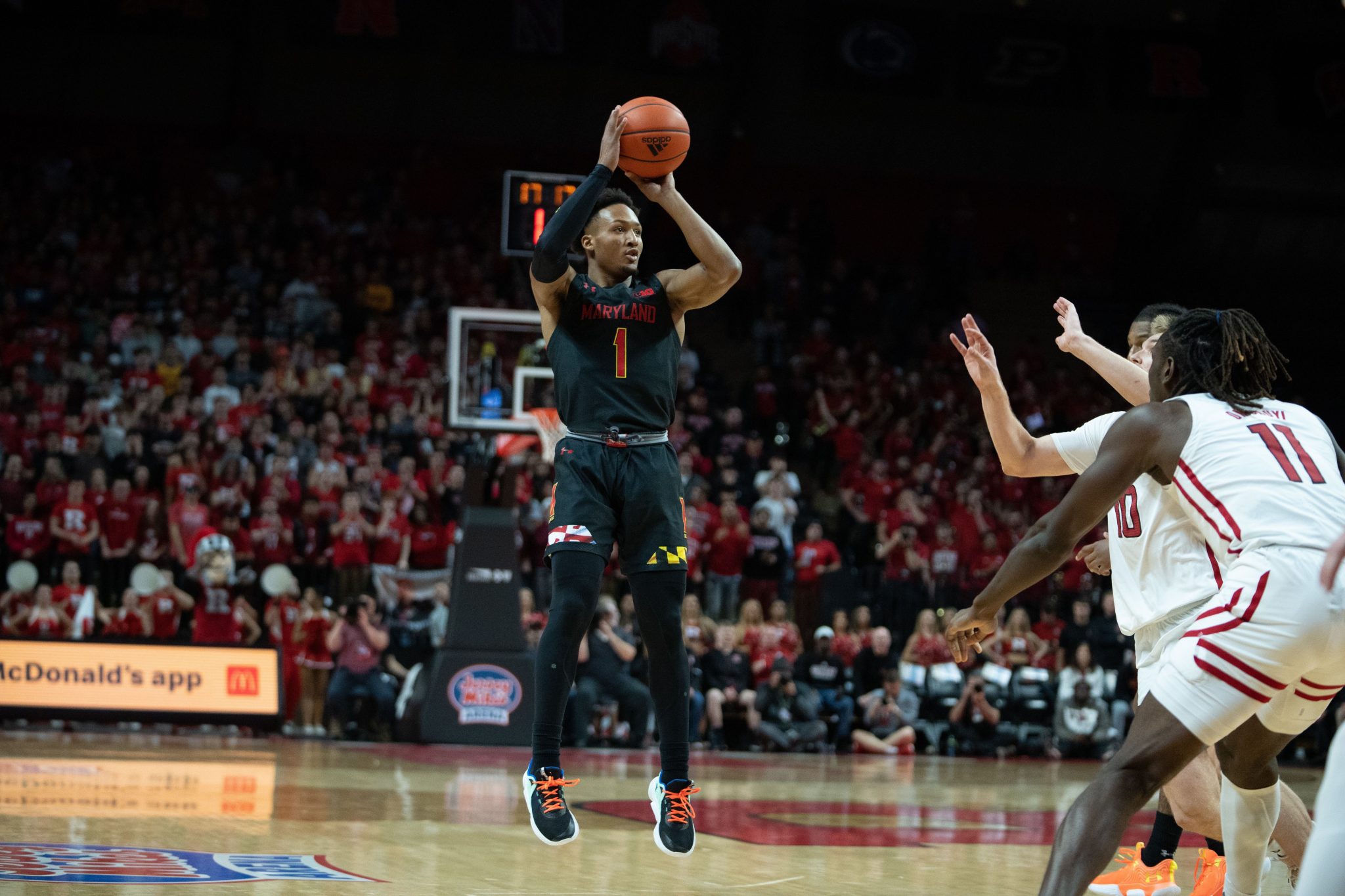 Maryland forced turnover after turnover and its shots began to fall. The Xfinity Center crowd roared as coach Kevin Willard’s squad reclaimed the lead after misfiring from the field throughout the first half.

The Terps’ press found success after a halftime adjustment and they took advantage of their extra possessions, making seven of their first eight shots of the second half after getting just one of their last 16 field goal attempts of the first half to fall.

“We watched film at halftime … We haven’t pressed a lot because we haven’t scored a lot, so it’s kind of like we almost forgot what to do,” Willard said. “So all of the sudden we started scoring and it was good to kind of, we just reviewed what rotations we wanted to make.”

“Sometimes when you see it, it’s easier to explain than when I draw it up on the board and I just think we made a really nice adjustment on the guard rotation that I thought really made [Bruce] Thornton think a little bit,” Willard said.

That spark coming out of the half helped the Terps break their recent slide with their first victory against a power-conference opponent in five games. Maryland’s last win of the type came against then-No. 16 Illinois in its conference-opener on Dec. 2 — also the last time Willard’s team took down a ranked opponent.

Both teams combined to make the game’s first five three-point attempts, with Don Carey and Jahmir Young knocking down the Terps’ tries. Donta Scott made Maryland’s only other three of the first half midway through the period while Ohio State was proficient from behind the arc, going 6-for-11 from three in the opening 20 minutes.

Julian Reese thrived early on against a Buckeyes team that didn’t boast an imposing threat to the Terps on the inside with forward Zed Key out. The sophomore found Young with a clean bounce pass for the game’s opening points and Maryland wasn’t afraid to attack the basket early on.

“It’s the first time we’ve actually been bigger than a team, even [Hart] had a little bit of a mismatch,” Willard said. “I thought we could go inside without [Key], you know, every once in a while it’s nice to get a little break against not having the size difference. So I thought, even if we didn’t do anything down there, just to get the ball in there.”

After notching a season-high 20 turnovers in its previous game against Rutgers, Maryland took better care of the ball and didn’t give it away once in the opening 10 minutes en route to a 23-18 lead halfway through the first half.

The Terps’ defense held the Buckeyes during a field goal drought that lasted over seven minutes, helping Maryland maintain its advantage. Free throws also buoyed the Terps through their tumultuous shooting stretch, making six during the drought and going 11-for-15 from the charity stripe in the first half.

Young’s layup that briefly stopped the slump was still Maryland’s only field goal in the final 11 minutes of the first half as the Terps made just one of its last 16 shots of the frame. The Charlotte transfer scored a game-high 13 first-half points, but Ohio State took advantage of coach Kevin Willard’s squad’s inaccuracy with a 13-3 run to end the frame with a 39-34 lead.

A rejuvenated Maryland team returned to the floor after the break and baffled Ohio State with its pressing. The Buckeyes turned the ball over five times in the first five minutes of the second half while the Terps capitalized with threes from Scott and Carey that catalyzed a 14-0 Maryland run to start the half.

“We were just letting them kind of come up against us in the first half and even flow into their offense,” Willard said. “I didn’t think we could do that, that was my biggest worry. I thought we did a great job in the second half of not letting just kind of flow, we made them work to get the ball up and I thought that was the biggest difference.”

Young continued to get to the basket and the free throw line while also contributing on the boards. He scored a joint career-high 30 points — 13 of which came from the charity stripe — while grabbing a season-high 11 rebounds.

The Buckeyes clawed their way back into the game after falling behind by as many as 14 points midway through the second half. A 13-2 run powered by its leading scorer, freshman Brice Sensabaugh, brought the Buckeyes back within three points with six minutes to go. Sensabaugh finished the game with a team-high 22 points.

Maryland and Ohio State traded buckets down the stretch, and Young popped up one last time with a short jumper that gave the Terps a six-point advantage with a minute to go.

Carey grabbed a crucial rebound on a desperation three-point attempt — a category in which the Terps outperformed the Buckeyes 40 to 26 — and forced Sensabaugh to foul out.

“[Rebounding] was very important because I feel like the last few games, we haven’t really emphasized on rebounding offensively and sometimes we let the defensive ones slip out of our hands,” Scott said. “I feel like we got a lot of the 50-50 ones today and that’s always important to keep a lead or make a lead jump in a game.”

Carey, Scott and Young each made their late free throws just like Maryland had throughout the game, scoring 27 of their 33 shots from the stripe. The Terps secured a crucial win to break a three-game losing streak against conference opponents.