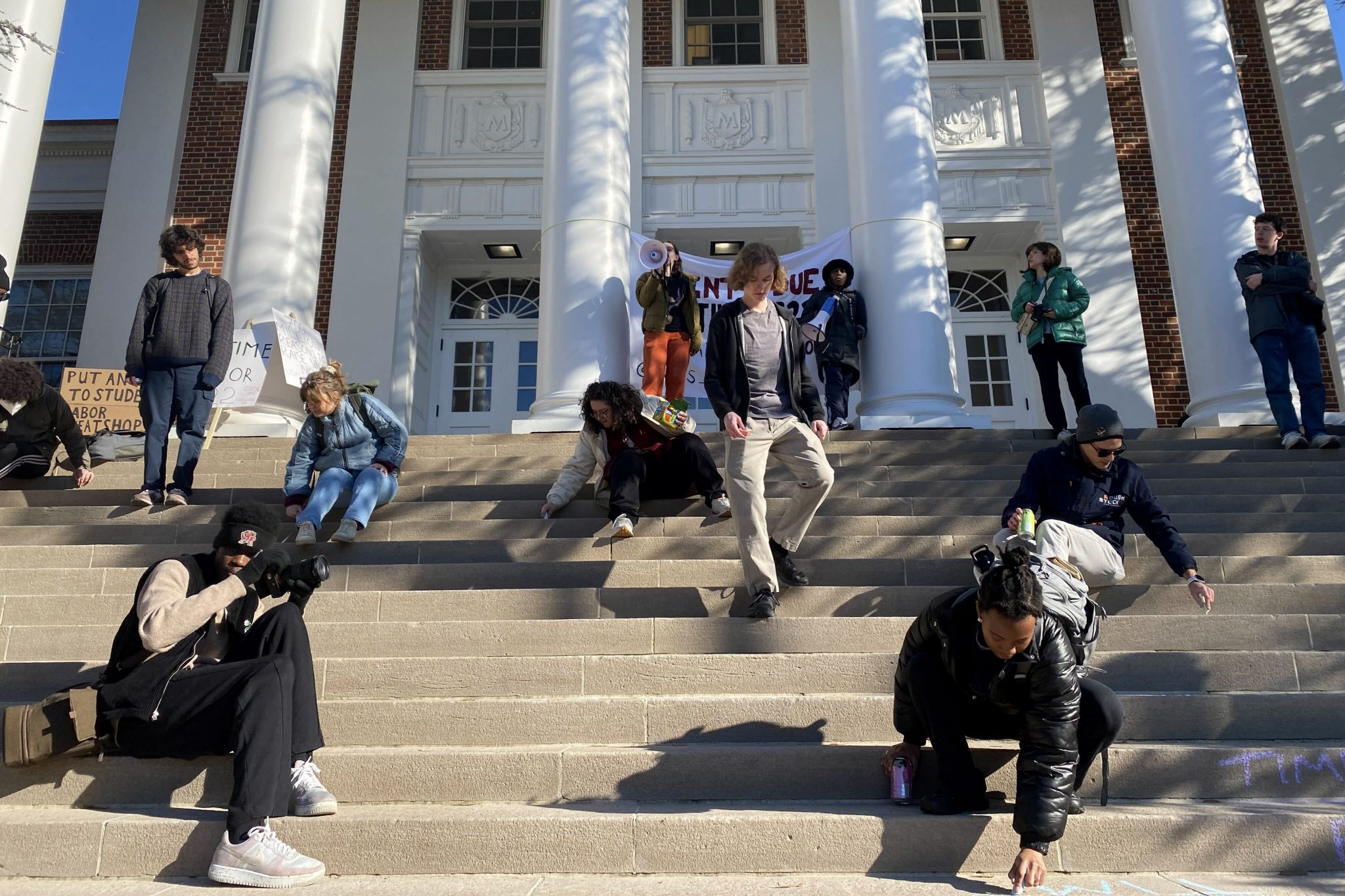 Protestors write messages in chalk to the administration on the steps of the Thomas V. Miller building during the United Students Against Sweatshops protest on Dec. 9, 2022. (Nene Narh-Mensah/The Diamondback)

A student worker organization hosted a protest on McKeldin Mall Friday to argue for a $22.65-per-hour wage for University of Maryland employees.

$22.65 an hour is the living wage for an individual without children in Prince George’s County, according to the MIT Living Wage Calculator.

As USAS members marched to the steps of this university’s administration building and left written messages about higher wages outside, they said these increases aren’t enough.

“[$15 an hour] is a relic of the past,” senior public health science major Vivian Flanagan said. “I’ve been hearing $15 as a minimum wage, honestly for like five to 10 years.”

Junior immersive media design major Grace Orellana said the university delayed raising the wage so long that some are afraid of asking for more money. $22 an hour is the bare minimum of what the school should be paying, Orellana said, who is co-leader of the student worker organizing committee at USAS.

“[They’re] giving us scraps essentially is what it is and making it seem like they’re making a great sacrifice,” Orellana said.

USAS said the funding for the minimum wage increase could come from the university’s unrestricted net reserves, which totaled more than $700 million in 2021, according to a financial analysis commissioned by the university’s AAUP chapter.

Saul Walker, the chief shop steward at this university’s chapter of employees union AFSCME, said the university is “sitting on” millions made by its employees while workers can’t make a living.

“They treat us like second class citizens,” Walker said.

Public health doctoral student Jan-Michael Archer said graduate students are advocating to increase graduate assistant stipends to match the area’s cost of living, because rent is currently too high in College Park for many graduate students to live in the area.

The issue goes beyond pay however, some community members said.

Art history and archaeology doctoral student Gabrielle Robinson-Tillenburg spoke about getting collective bargaining rights and a union for graduate students.

The current “Meet & Confer” policy where graduate assistants meet with administrations of the graduate school to discuss concerns once a semester isn’t sufficient, she said, because it doesn’t incentivize the university to pay students.

A union would give them benefits such as protections against bias and sexual harassment, Robinson-Tillenburg added, who is media co-chair of Fearless Student Employees.

Kelsey Coleman, the president of this university’s USAS chapter and a senior Black liberation studies major, said by applying the same consistent pressure to administration that brought the $15 minimum wage, organizations can eventually get the $22.65 wage.

CORRECTION: A previous version of this story misstated that Archer said raising employee minimum wage to $22.65 an hour would allow graduate students to live where they work. As graduate students are salaried, Archer was advocating for separate issues. This story has been updated.