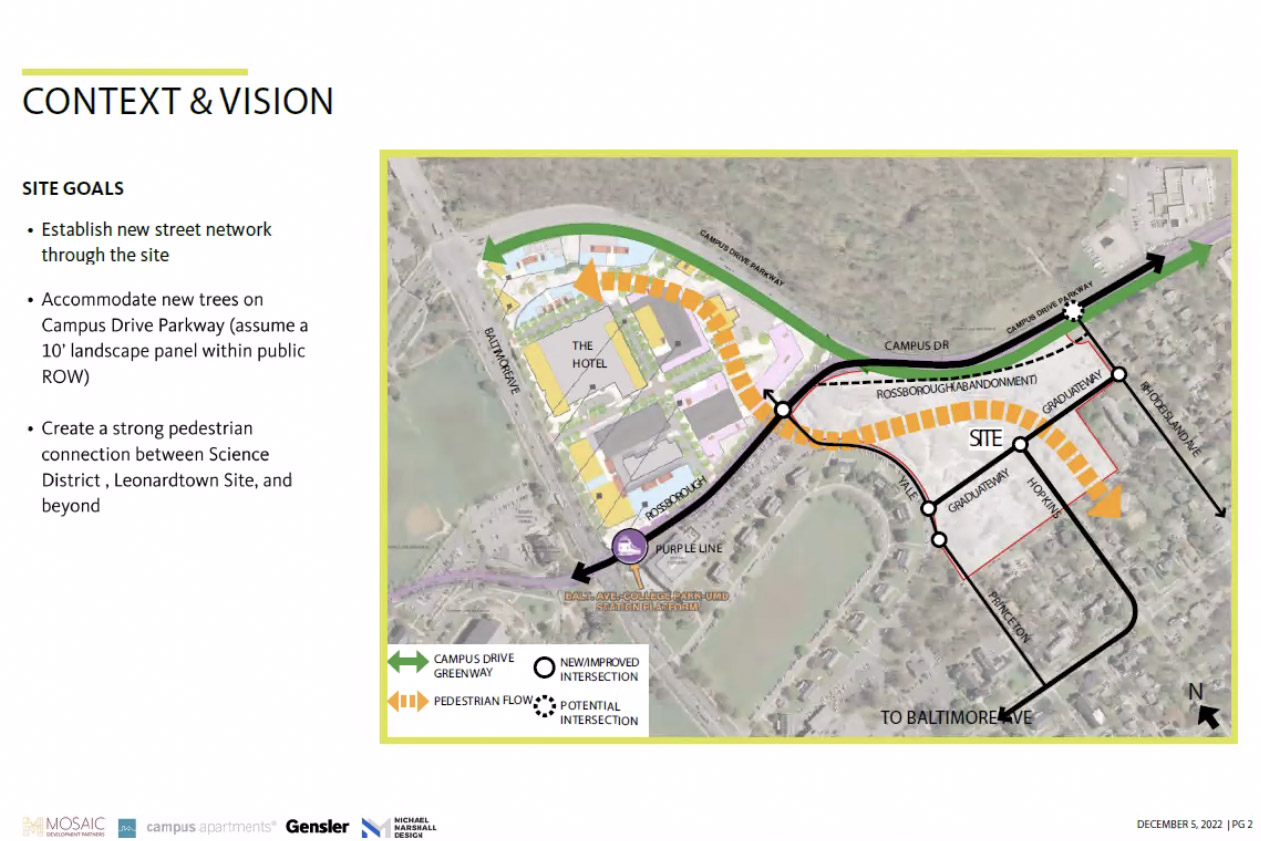 The University of Maryland’s real estate office is planning graduate student housing at Old Leonardtown, according to a Friday presentation to the GSG.

The project is still early in planning stages, but the new development is tentatively estimated to house approximately 800 people and is slated to be completed in fall 2026, according to Edward Maginnis Jr., the assistant vice president of the university’s real estate office.

The real estate office is working with the Terrapin Development Company, Mosaic Development Partners and Campus Apartments. The new development comes as the university paused development on the Western Gateway project in October 2021, which would have provided more graduate student housing, after backlash over environmental concerns.

Although the project is still early in its development and there aren’t building designs yet, the companies presented the general layout of the site and some of their main priorities for the new housing development, including creating safe pathways for pedestrians and cyclists.

Developers were not able to give a firm answer on the price range of the apartments, concerning Graduate Student Government representatives.

According to Maginnis, the project still needs to establish the breakdown of units — the number of studio and multi-person apartments — in order to establish prices that will provide affordable and accommodating housing for the most students.

With the combination of the Graduate Hills & Gardens apartments and graduate apartments in Courtyards, Maginnis estimated there are currently about 845 beds available for more than 10,000 graduate students enrolled at this university.

The assembly also addressed the need for family and pet-friendly units.

Jennifer Mesiner, the representative for the Teaching and Learning, Policy and Leadership program, noted that when she arrived at this university with her two dogs, she wasn’t eligible to live in the Graduate Hills & Gardens apartments because of their cats-only policy.

“Students aren’t going to get rid of pets they already own to get access to this housing,” Mesiner said.

Representatives also raised concerns about the proximity of the housing site — which might house graduate students and their families — to Fraternity Row due to issues of noise from parties and safety worries from harassment from undergraduate students.

Jillian Rothschild, the government and politics department representative, expressed concern about younger women who are both graduate students and work as teaching assistants walking in the area and possibly getting catcalled by one of their students.

“Something to keep in mind going forward, is how to offer graduate student housing but not right next to a lot of the undergrad housing, just because it is really hard when you’re an instructor but you look like you could be the age of these undergrads too,” Rothschild said.

John Childress, the vice president of development and special projects at Mosaic Development Partners, stressed that because the development is still early in the process, they want to build the site with graduate student feedback in the form of focus groups and surveys that will likely start in January 2023.

“We want to do this with the student input as number one priority, as well as the goals of the University of Maryland,” Childress said.