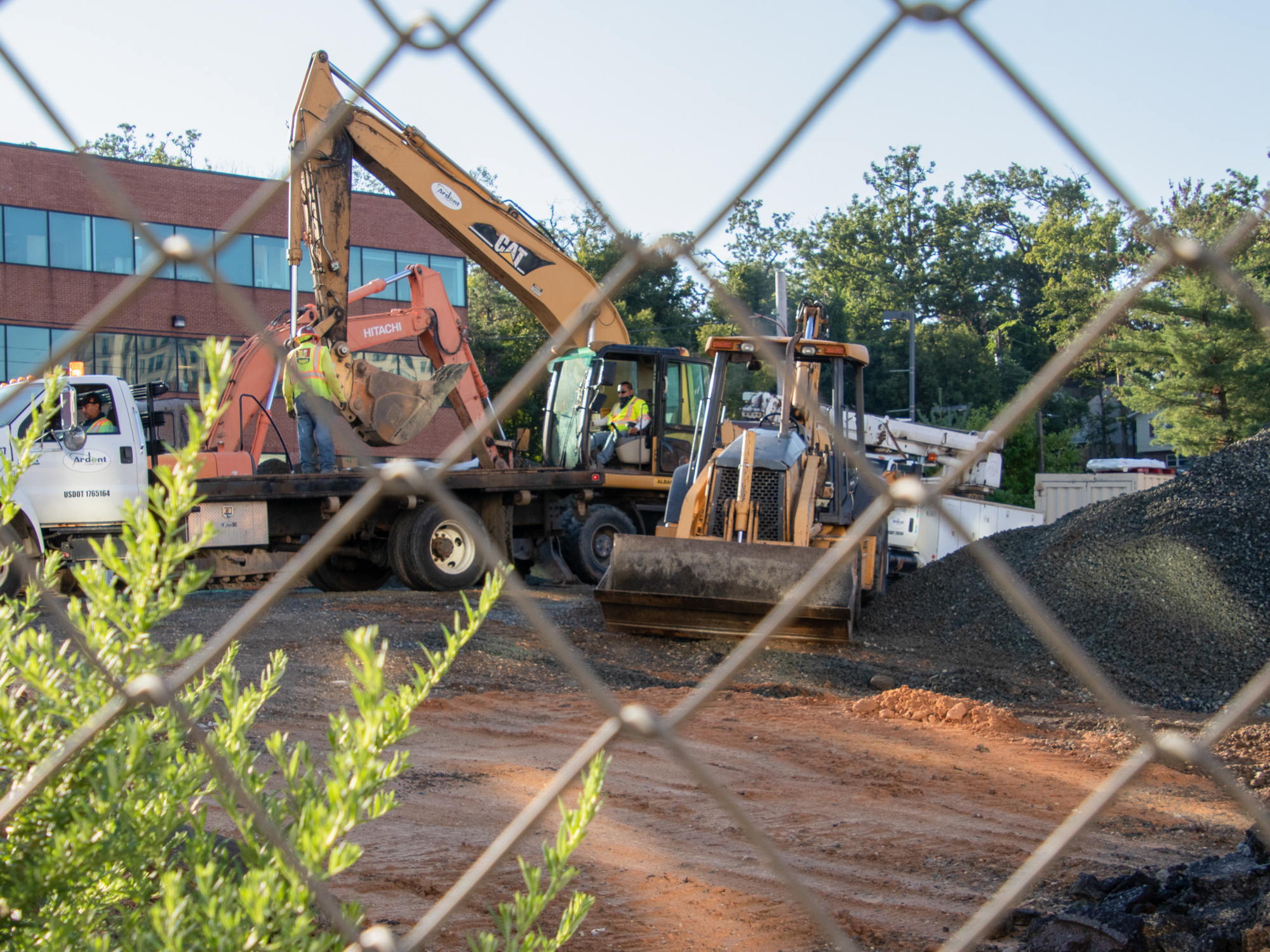 Construction workers on the building site of the EcoGrads affordable housing apartment complex in College Park on Aug. 31, 2022. Made for graduate students, faculty and people entering the workforce, EcoGrads plans to have micro unit apartments, electric shuttles and bike lanes, according to its website. (Daryl Perry/The Diamondback)

College Park City Council members and University of Maryland graduate students are voicing concerns about EcoGrads, a new apartment complex along Route 1 and Quebec Street that claims to offer sustainability and affordability.

The apartment complex was initially proposed as a 12-story building but after conversations with stakeholders, the apartment will be seven stories tall to keep the same aesthetic as surrounding apartments, such as Tempo, said technical and management consultant Matthew Tedesco.

The apartment will offer 123 furnished studios that will house a total of 256 tenants.

EcoGrads was previously aimed for graduate students, but real estate developer Mark Manzo said they no longer want to be locked in to only graduate students because of the legal ramifications the development company could endure. Rent will also be adjusted because of inflation costs, and there will be 110 parking spots due to zoning requirements, up from the initially proposed 60 spots.

But for Joey Haavik, a graduate student studying international education policy and president of the Graduate Student Government, said it’s because graduate students can’t afford it.

Manzo said he still plans the development to be 5 percent to 10 percent below market rate, but it will not be considered low- or moderate-income housing.

Some are also skeptical of EcoGrads’ marketing as a sustainable development. Marie Panday, a graduate student studying geographical sciences, said EcoGrads’ website appeared to be greenwashing — a marketing strategy where companies apply eco-friendly based topics to sell to the consumer.

EcoGrads must show it is going to be Leadership in Energy and Environmental Design (LEED) Silver certified, according to city records.

But the only other sustainable initiative Panday found on the website was the incentive to carpool with other students with fewer parking spots. To make EcoGrads truly sustainable, the complex could offer composting or implement rainwater storage infrastructure, Panday said.

“I just hope they’re working with an engineer that is sustainability minded or can consult with someone externally that can provide better recommendations,” Panday said.

EcoGrads plans to have 60 parking spaces on the property and an additional 50 parking spots leased with Cambria Hotel in College Park, Tedesco said. The apartment also wants to include a private carpool service to foster a close-knit community instead of an electric shuttle.

However, District 2 council members Llatetra Brown Esters and Susan Whitney were concerned about parking availability because EcoGrads would have to pay the Cambria Hotel a monthly fee to use parking spots. If developed, EcoGrads will be located in District 2.

“I will have trouble signing on to this if I don’t see a more permanent solution to the parking problem as much as I’m enthusiastic about everything else,” Whitney said during a council work session Tuesday.

The application will be reviewed with a public hearing before Prince George’s County Planning Board Sept. 29.

Graduate students such as Haavik remain concerned about affordability. To them, housing should be affordable for people who need to take out loans, have full time jobs or have partners to care for.

“It goes beyond the way we talk about the infrastructure of a building,” Haavik said. “It’s also the philosophy of a community that lives there.”