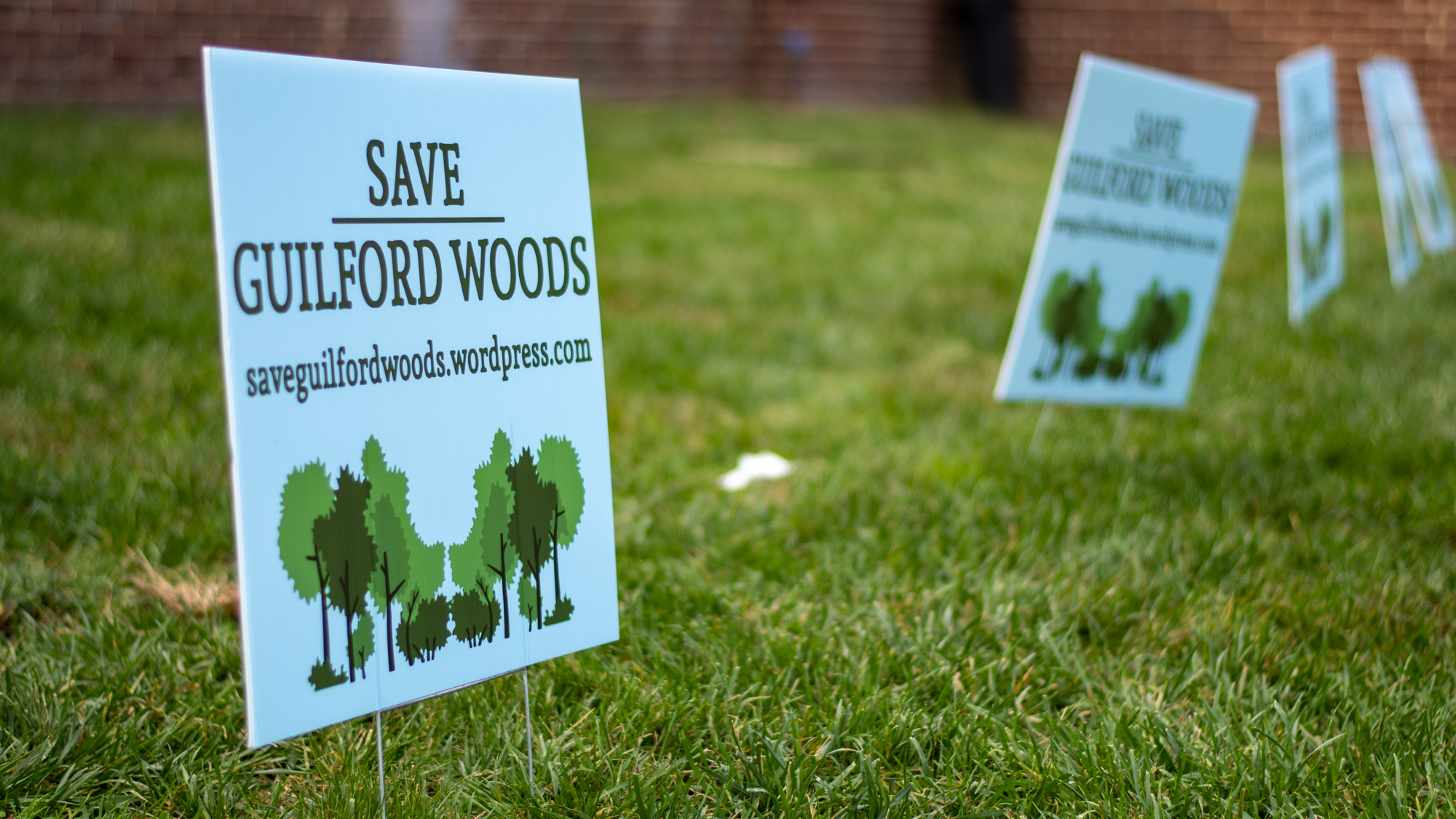 Signs for the "Save Guilford Woods" group at the Guilford woods protest on McKeldin Mall on Oct. 15, 2021. (Joe Ryan/The Diamondback)

This story is part of The Diamondback’s 2021 Housing Guide. Click here for the rest.

The University of Maryland is pausing development on the Western Gateway project on Guilford Woods, university President Darryll Pines and GSG President Tamara Allard announced in an email Thursday.

The announcement follows months of backlash against the project, which activists say would deforest Guilford Woods — a wooded area on the southwest side of campus. The opposition reached a fervor earlier this month when protesters filled McKeldin Mall, bearing tree branches and handmade signs. Proponents of the development say it could provide much-needed affordable graduate student housing.

Instead of focusing on plans for graduate housing on Guilford Woods, the university will issue a Request for Expressions of Interest to partner with the administration to redevelop Old Leonardtown into a new mixed-income residential community prioritizing affordable and accessible graduate student housing, according to the email.

In addition, the Division of Student Affairs is working with Maryland Economic Development Corporation and Capstone On-Campus Management to turn some garden-style apartments into graduate student housing. This university expects to provide nearby housing options for about 90 graduate students by fall 2022, according to the email.

The administration will continue to study the Guilford Woods area to address environmental concerns related to the proposed development, the email read, continuing the university’s commitment to achieve a Net-Zero Carbon Neutral campus by 2025.

“We are excited for these upcoming projects and look forward to continuing work with graduate students on solutions and forward-looking approaches,” the email read. “It will take many partners working collaboratively toward shared goals.”

A wave of relief fell over Jan-Michael Archer, a doctoral student in the public health school, when he heard that the university was putting a pause on planning the Western Gateway project. After months of organizing, Archer and other organizers feel that the university’s administration is taking their concerns “seriously.”

“It’s also a relief because we’re not gonna let up,” he said. “There’s a long way to go — it wasn’t a commitment to save Guilford Woods.”

Kislay Parashar, the SGA president, said that he believes undergraduate students will be happy about the announcement. Old Leonardtown could help solve the graduate housing issue, he added.

Earlier this month, the Student Government Association passed a bill calling on the administration to address environmental concerns about developing Guilford Woods.

Autumn Perkey, the Graduate Student Government legislative affairs vice president, said the Old Leonardtown project will be much easier to push forward. But the new housing solutions are not going to be enough to deal with the graduate student crisis. Perkey suggested other ways the university could expand graduate housing, such as converting undergraduate housing, buying and leasing out nearby townhomes, or even turning Greek Life houses into graduate living spaces.

“This is a starting point — this is not a finish line by any means,” Allard told The Diamondback.

Allard said she appreciated the consideration that administration took by including the GSG in the conversation.

Stuart Adams, a community advocate for Save Guilford Woods, said he was glad to see the letter signed by both Allard and Pines. He emphasized that this is an “interim success” for those advocating to preserve the wooded area. He’s hopeful for an alternative site for the Western Gateway project.

“The housing crisis remains and just as much as you rally to save Guilford Woods, you also need to think about alternative sites for affordable graduate student housing,” Adams said.

For other Guilford Woods advocates, like environmental health professor Amy Sapkota, the university’s decision spoke to the administration’s willingness to listen to concerns from students, faculty, staff and community members.

Still, Sapkota realizes that the pause is only temporary.

“We remain hopeful that this temporary pause will evolve into a decision to permanently preserve Guilford Woods, which is really an irreplaceable natural resource for our campus community,” Sapkota said.