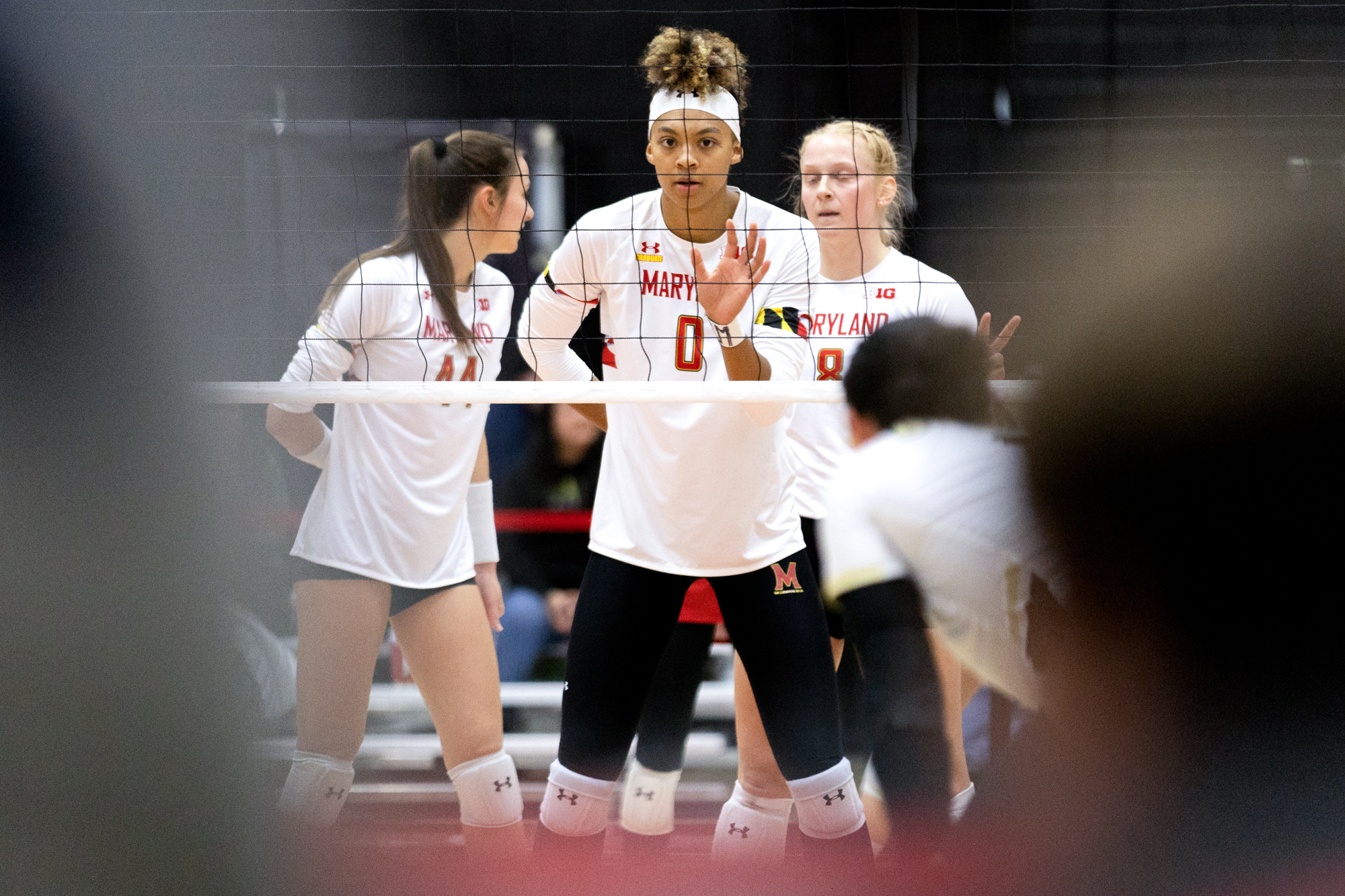 Maryland volleyball fell short of a national tournament berth in 2022, but it still achieved plenty throughout a resilient 16-win campaign highlighted by rare road success, significant Big Ten upsets and an ever-dominant defense.

Coach Adam Hughes’ squad finished with a winning record on the road for the first time in four seasons and notched a pair of wins over top 10 conference foes, all while middle blockers Rainelle Jones and Anastasia Russ wreaked havoc on defense en route to second-team All-Big Ten honors.

Perhaps the pinnacle of the Terps’ season came on Oct. 16 when they strolled into Holloway Gymnasium and swept then-No. 9 Purdue for the program’s first road win against a top 10 team since joining the Big Ten in 2014.

“When we were celebrating in the locker room after beating such a good opponent, I realized that I settled in [and] found my match [with Maryland],” said Russ, who transferred from Pitt in January. “We can do amazing things together.”

But a pair of home losses in its subsequent matches prevented Maryland from further asserting itself in the Big Ten, and a rash of injuries and illnesses down the stretch added more challenges to the already demanding late-season grind of Big Ten volleyball.

“It’s never an ideal situation to have one of your starters be out,” senior defensive specialist Lexy Finnerty said. “But luckily with our team, we prepare everyone the same way, so people were able to step up.”
Sophomore middle blocker Ellie Watson flourished in a handful of November starts filling in for an injured Jones, while graduate pin hitter Gem Grimshaw made an impact in relief of Laila Ricks, who also missed time with an injury. Seldom-used setters Erin Engel and Zoe Huang both tallied career high assists while filling in for Sydney Dowler against No. 3 Wisconsin on Nov. 12.

[Rainelle Jones flourished in her final match for Maryland volleyball]

“We had a lot of people step into roles,” Hughes said. “We need that if we’re going to have success … I thought that was a huge moment for us to see that we can find ways to win games with some people in and out of the lineup.”

November also marked the long-awaited return of sophomore outside hitter Erin Morrissey, who said her return to the court was surreal after she saw her first action since she suffered a torn ACL in August 2021.

Eventually, the Terps were rewarded for their mettle. Following a pair of hard-fought road losses to top 10 opponents, Maryland rallied together and put forth one of its most inspired performances of the season in a 3-1 upset of then-No. 5 Ohio State in College Park on Nov. 18.

“That was probably one of my happiest moments, going into the locker room and just [being] all smiles from everybody,” Russ said. “It was also really surreal because they were ranked fifth, and I know a lot of girls said it kind of reminded them of the [win over No. 2 Wisconsin] the year before.”

Maryland’s tournament hopes were extinguished following two more home losses, but its grit persisted until the season’s final whistle. In their last match of the year at Indiana, the Terps fell behind 2-1 but rallied to win the final two frames for their first five-set win of the season after losing its first four games of the sort.

“To have our backs against the wall, we could have easily just kind of laid over and surrendered,” Hughes said. “They’ll never do that. To find a way to come back … [and] beat a team that beat you to start Big Ten play, it’s a pretty good way to finish the season.”

The comeback in Bloomington, Indiana, gave Maryland its eighth road win of the season, the most it has racked up since nine in 2018.

Jones said the Terps’ success away from home surprised her and credited the team’s road success to the minimal distractions that come with preparing for an away tilt.

The Terps’ patented defense traveled with them no matter where they played, as Jones and Russ anchored a stifling platoon that led the NCAA in blocks for the second straight season. Jones set the program record with her 650th career block on Oct. 7, while Russ was recognized as a North Region AVCA All-American honorable mention on Dec. 6.

Offensively, junior outside hitter Sam Csire set a career high with 401 kills on the year while Laila Ivey finished second on the team with 285 putaways. Ricks chipped in 154 spikes and joined Jones and Russ as the only three Terps with at least 100 kills and 100 total blocks.

“Laila Ricks has made herself as a known commodity in being one of the best blockers on the right side,” Hughes said. “People have to think about what they want to do with that matchup, and that’s an advantage for us as a program.”

Meanwhile, Dowler orchestrated Maryland’s attack with her second straight 1,000-assist season and led the Terps with 40 service aces. She also became the first player in program history to be recognized as Big Ten setter of the week on Oct. 17.

While Maryland fell short of its first NCAA tournament since 2005, Hughes’ squad avoided a losing record for the second straight season and defeated multiple top 10 opponents for the first time since joining the Big Ten in 2014.

And as Csire, Russ, Ricks and Dowler return for their senior campaigns, the Terps will rely on a cluster of fresh talent to build on another promising season for a budding program.

Newly signed recruits Eva Rohrbach and Sydney Bryant are set to arrive in College Park next fall, while the likely departure of sophomore libero Milan Gomillion — who entered the transfer portal after the end of the season — may give freshman Ally Williams a chance to prove herself sooner than expected.

Overall, Hughes believes Maryland’s three-win regression from 2021 doesn’t account for the immense strides his team made this fall. And with a core of seasoned veterans and a fresh batch of newcomers at his disposal for next season, expectations will continue to rise for a program still on the hunt to join the ranks of the Big Ten’s elite.