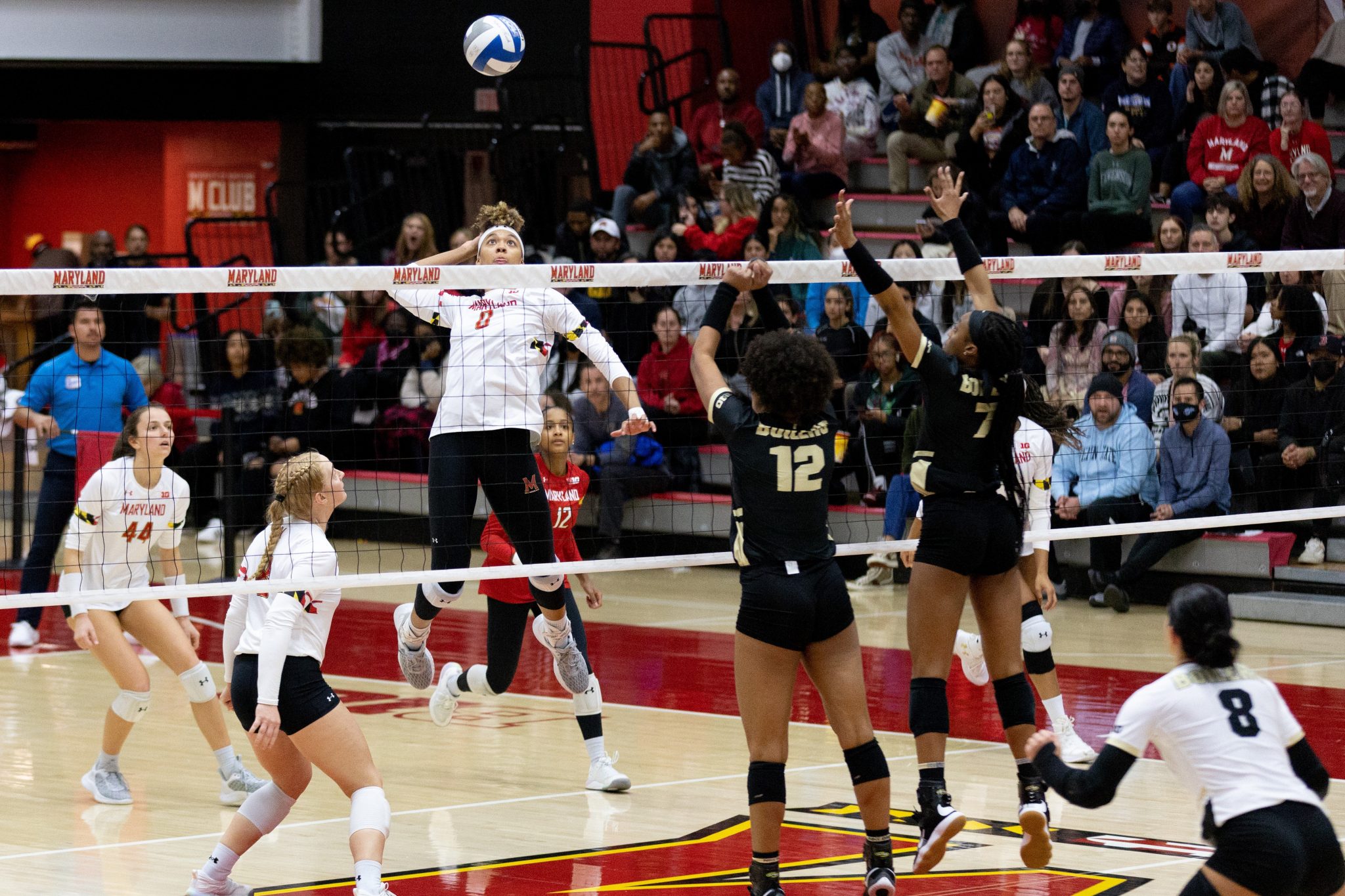 Last year, it was unclear whether Rainelle Jones played her final game in a Maryland uniform following the team’s season-ending loss to Minnesota.

A senior at the time, Jones had an extra year of eligibility from the COVID-19 pandemic-riddled season the year before. The Oxon Hill native ultimately opted for one final ride in College Park and saddled up for a team hungry for its first NCAA tournament bid in 17 years after a near miss in 2021.

Jones shined for Maryland throughout her farewell tour, pummeling 163 kills and registering 162 total blocks as the Terps scooped 15 wins ahead of the season’s final match, while becoming the team’s all-time leader in blocks, with 718.

Maryland’s hopes of appearing in its first NCAA tournament since 2005 evaporated amid a 3-8 skid through the season’s closing weeks, making it clear the Terps’ Nov. 25 showdown against Indiana would be Jones’ final career game.

It meant Jones would battle a Hoosiers team coached by Steve Aird, who served as Maryland’s head man for four years. He abruptly resigned following the 2017 season, right before Jones arrived in College Park. While Jones never played at Maryland under Aird, seeing him across the net added even more significance to her final game.

“This was a super big match against Steve,” Jones said. “He did recruit me when I was in high school, and I did commit to him, so it was definitely a big obstacle with me and the team and me and the other people across the net.”

When the first whistle blew, Jones wasted little time wreaking havoc against Aird’s squad.  She connected on the Terps’ first two kills of the day with a pair of swings that radiated the confidence of a seasoned veteran.

But even in her final career match, Maryland’s longest tenured player couldn’t settle in as gently as she’d hoped.

After she unleashed a spike in the late stages of the first set, Jones was on her way to the sideline when coach Adam Hughes redirected her to the service line, a foreign spot on the court for the middle blocker.

“I usually don’t serve during the games, which is really nerve-racking when Adam tells me [to] go ahead and serve,” Jones, who logged just one career service ace in a handful of attempts throughout her career, said. “I think that was actually my first serve the entire season … We had a lot of subs being used, so it was definitely not expected.”

Her production dipped across the next two sets as a surging Hoosiers squad seized a 2-1 lead that brought them within a set of sweeping the season series with the Terps.

Before Indiana could pull away in the fourth set, Jones broke through with a personal three-point run for Maryland that featured an echoing block assist sandwiched between two more momentum-mounting spikes. Her stifling solo block in the face of Kaley Rammelsberg gave the Terps another crucial late point that helped set up a decisive fifth frame.

Jones continued her swan song with two more blocks and another kill in the fifth set that pushed her team closer to victory.

On the brink of their final win of 2022, the Terps leaned on their identity as a suffocating defensive unit to scratch across one last point. And it came from the glue that helped Maryland ascend to the Big Ten’s best blocking team three years in a row.

Stationed in the middle of the net, Jones stood still, hands drawn in front of her, as she watched the Hoosiers’ attack develop. Indiana’s Camryn Haworth faced the left side of the floor and pushed an arcing lob over her head toward Candela Alonso-Corcelles, who lurked on the right side.

When the ball floated off of Haworth’s hands, Jones made her move.

Maryland’s all-time leading blocker gracefully shuffled to her left, swung her arms back and elevated for one more.

Alonso-Corcelles squared up her shot, but her echoing blast was greeted with a thump from Jones and Sam Csire, who sent the ball back to the hardwood for a match-sealing stuff, sparking a celebration among the Terps.

“The team has been begging me to cry,” Jones said. “But I didn’t want to in front of them.”

The match-clinching block assist capped off a splendid final game for Jones, who logged her first double-double of the season with 10 kills and a season high 11 blocks, both of which led the team.

For Jones, her final rejection eradicated the frustration of a season-long struggle in a particular area of her game.

“I, for the first time, finally was able to read the right side which [has been] really hard for me this entire season,” Jones said. “So having Sam by my side and being able to get the big block on the right side is really huge for my growth and for the team overall.”

The fifth year standout was an integral part of Maryland’s success in 2022, finishing second on the team with 173 blocks and fourth on the squad with 163 kills. She also tied for first in the country in blocks per set, the second straight season in which she’s claimed at least a share of NCAA blocking superiority.

Jones racked up 718 total blocks in her career, the most in program history. And while she never got to showcase her blocking prowess in the national tournament, Jones leaves College Park optimistic the program will continue to trend in the right direction.

“Overall as a whole, Maryland is definitely super, super excited for the future,” Jones said.