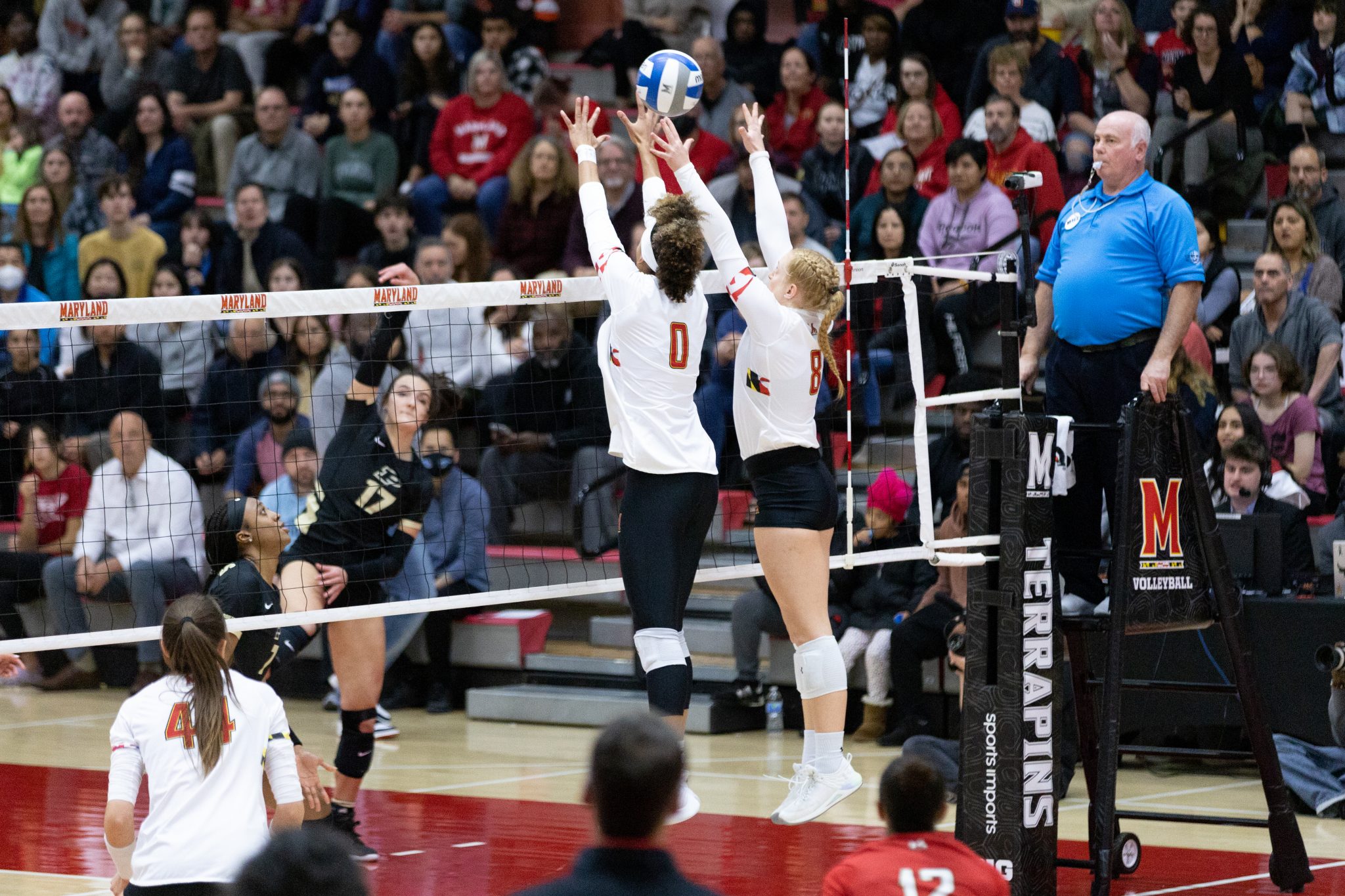 Rainelle Jones and Sydney Dowler team up for a block in Maryland volleyball’s 3-1 loss against Purdue on Nov. 23, 2022. (Riley Sims/The Diamondback)

Raven Colvin’s serve teetered on top of the net before it rolled over onto Maryland’s side and gently graced the floor, drawing a resounding cheer from an elated Purdue bench.

Her ace – the Boilermakers’ 11th of the match – was the final blow in a riveting fourth set that No. 19 Purdue seized as Maryland lost its hard-fought home finale, 3-1.

The Terps fell short of their second win against No. 19 Purdue this season after sweeping the initial meeting on Oct. 16.

“They’re top-25 for a reason,” coach Adam Hughes said. “I just don’t think you can follow the results to give yourself value … [we] did a good job competing and we just came up a just a little bit short.”

But the Boilermakers stymied Maryland behind Colvin’s team-high 16 blocks as Maryland hit just .067 thanks to a season-high 36 attack errors.

Eva Hudson had 17 kills for the Boilermakers, who belted 49 putaways a match after a season-low 28 in a loss to Nebraska.

Csire and Hudson went blow-for-blow in the late stages of the fourth frame, with both outside hitters staving off a pair of set points for their respective squads throughout a sequence that intensified by the rally.

“When the game’s that close, you just gotta keep swinging,” Csire said. “I know I have my back row there to cover so I was just kind of letting it go, letting it free and hoping it worked out.”

But after Hudson’s final kill of the night knotted things at 27, Colvin took over.

Her fifth block of the set gave Purdue a 28-27 lead, which Jones washed away with a spike on the subsequent point. Undeterred, Colvin swiftly responded with her eighth putaway before marching to the service line to seal the win with the game-winning ace.

The night began with Hudson and Csire trading a cluster of early spikes as both sides jousted for control in the first set.
Later in the frame, Csire delivered a kill and a block assist with Jones that put Maryland ahead 24-22. And moments after logging what was her 700th career total block, Jones smacked down a set-sealing spike as the crowd bellowed in approval.

The Boilermakers responded by taking five of the first seven points in the second set, with Maddie Schermerhorn notching two straight aces as part of the run.

“[Purdue] had 11 aces,” Hughes said. “And given one or two points there … that’s maybe the difference in the match.”

From there, Purdue used a bevy of Colvin rejections to surge ahead in the second stanza after playing catch-up for most of the first.

Colvin sandwiched a pair of solo stuffs around Hudson’s sixth kill of the night give the visitors a six-point lead they wouldn’t squander.

In all, Purdue racked up six block assists and three solo blocks and held Maryland to just five kills throughout a 25-15 drubbing that evened the match at a set apiece.

Csire ensured the Terps wouldn’t be bogged down again, though, as she belted seven spikes throughout a back-and-forth third set.

The first surge came from Purdue, which used a pair of Hannah Clayton putaways during a 7-1 stretch that put it ahead 16-11.

The Terps parried an 8-2 run punctuated by a resounding rejection from Sydney Dowler and Anastasia Russ, but the stanza’s final scoring spree sided with the Boilermakers.

Madeline Koch dumped two of her five kills in the match during a set-sealing 5-1 rally that put Maryland on the defensive.

“Volleyball is a very big momentum sport,” Hughes said. “We were a little bit closer in the third [set] and had some opportunities there … The more opportunities we get in those situations, the more we learn how to handle that pressure.”

Jones walled a Colvin spike as Maryland sprung to a 9-3 lead in the fourth set.

But the Boilermakers ultimately stormed back to win the teeter-totter frame 30-28 behind six more kills from Hudson and Colvin’s late heroics.