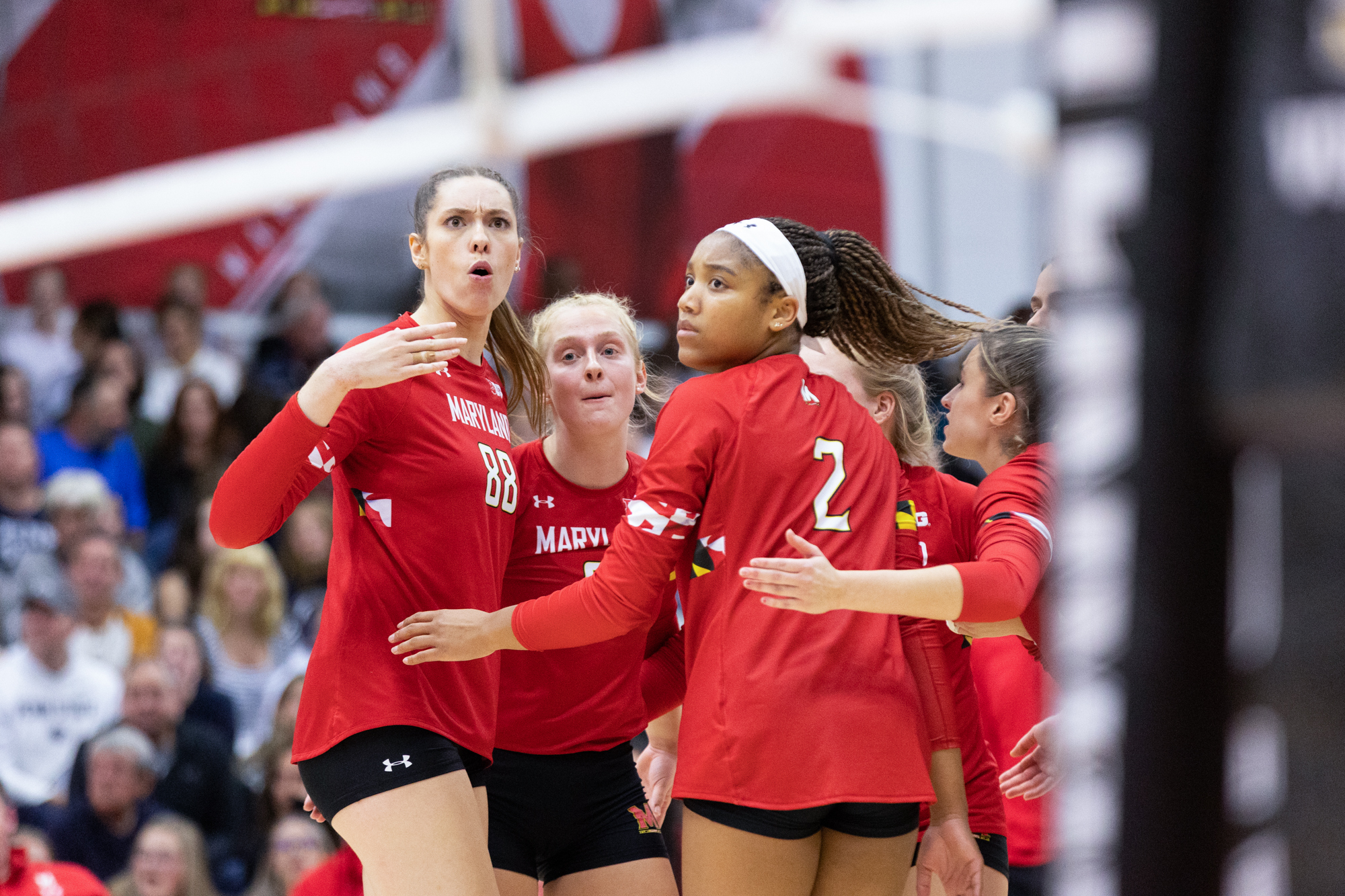 Even amidst a sea of Maryland hands at the net, May Pertofsky’s spike pinballed through the Terps’ block and fluttered to the floor for Michigan’s 52nd and final kill of the night, adding the finishing touch to a dominating fourth frame for the Wolverines.

The once-buzzing energy of a senior night crowd at the Xfinity Center Pavilion gradually fizzled throughout the evening as Maryland volleyball couldn’t capitalize on a first-set win and fell to Michigan 3-1.

“We were battling,” senior defensive specialist Lexy Finnerty said. “We were in it until the fourth set and it’s frustrating that we didn’t get the job done.”

Pertofsky’s match-sealing spike was her seventh of the night, but outside hitter Jess Mruzik did most of the Wolverines’ damage with a match-high 18 putaways, including two during a run of ten straight Michigan points that blew the fourth stanza wide open.

Mruzik went toe-to-toe with Maryland’s Sam Csire, who led the Terps with 15 kills. Anastasia Russ racked up 13 putaways on an efficient 25 swings in the losing effort.

Coming off her season-best 21 kill-outing a night ago, Csire continued to bring the heat from the outside early.

Two of the junior’s six kills in the opening frame sparked lengthy scoring runs that Maryland used to drift away from Michigan.

Her second spike spurred a 5-0 run that helped the Terps crawl out of an early 6-2 hole, while her next putaway triggered a string of six straight scores that gave her team its largest lead of the stanza at 18-11.

But the Wolverines found success behind the endline, and a pair of service aces fueled a 9-1 rally that flipped the set on its head.

Jess Robinson clubbed two kills for Michigan down the stretch, but her opposing middle blocker had the final say to a teeter-totter first frame.

Russ wiped away the Wolverines’ first set point with her third kill before she sealed Maryland’s 28-26 triumph with the final two of her team’s 16 kills in the stanza.

“[We] came up with big swings to get ourselves out of trouble,” coach Adam Hughes said. “I thought earlier in the season if that kind of run happened, we probably wouldn’t have been able to stay on top.”

Even when Michigan grabbed the first six points of the second set, the Terps crept their way back. A pair of Laila Ivey putaways and a Wolverines error eventually squared the stanza at 17, sending a fading Michigan team scurrying back to its bench.

Unfazed, the team in maize grabbed four points in a row out of the timeout, and Mruzik drove home a cluster of late kills that steered Michigan to a 25-22 win.

“We were playing better after that first six-point run,” Hughes said. “But realistically I thought we didn’t execute in some key situations.”

Ivey and Csire each initiated a 4-0 run in the third frame with a pair of kills before Maryland’s defense began to pounce.

But Mruzik diverted from her offensive clinic to contribute a resounding solo block that headlined another late-set Wolverines rally.

“She’s one of the best players in the country,” Hughes said. “And she does it in a variety of ways.”

And this time, the Terps couldn’t hold on.

A bad set by Michigan’s Maddie Dowd tied the stanza at 23, but the senior setter atoned with a kill on the subsequent rally before Csire’s misfire gave the Wolverines a 2-1 set advantage.

Rainelle Jones provided an early boost for Terps in the fourth frame with a kill and a block, but her senior night grew more sour with each point Michigan notched during a 10-0 tidal wave that drowned out the once-noisy Pavilion crowd, jutting the Wolverines out to a 15-7 lead.

With her team rolling, Mruzik continued her assault on the Terps, blasting four more kills during Michigan’s 25-11 set-four win as the Wolverines waltzed out of College Park with a victory.