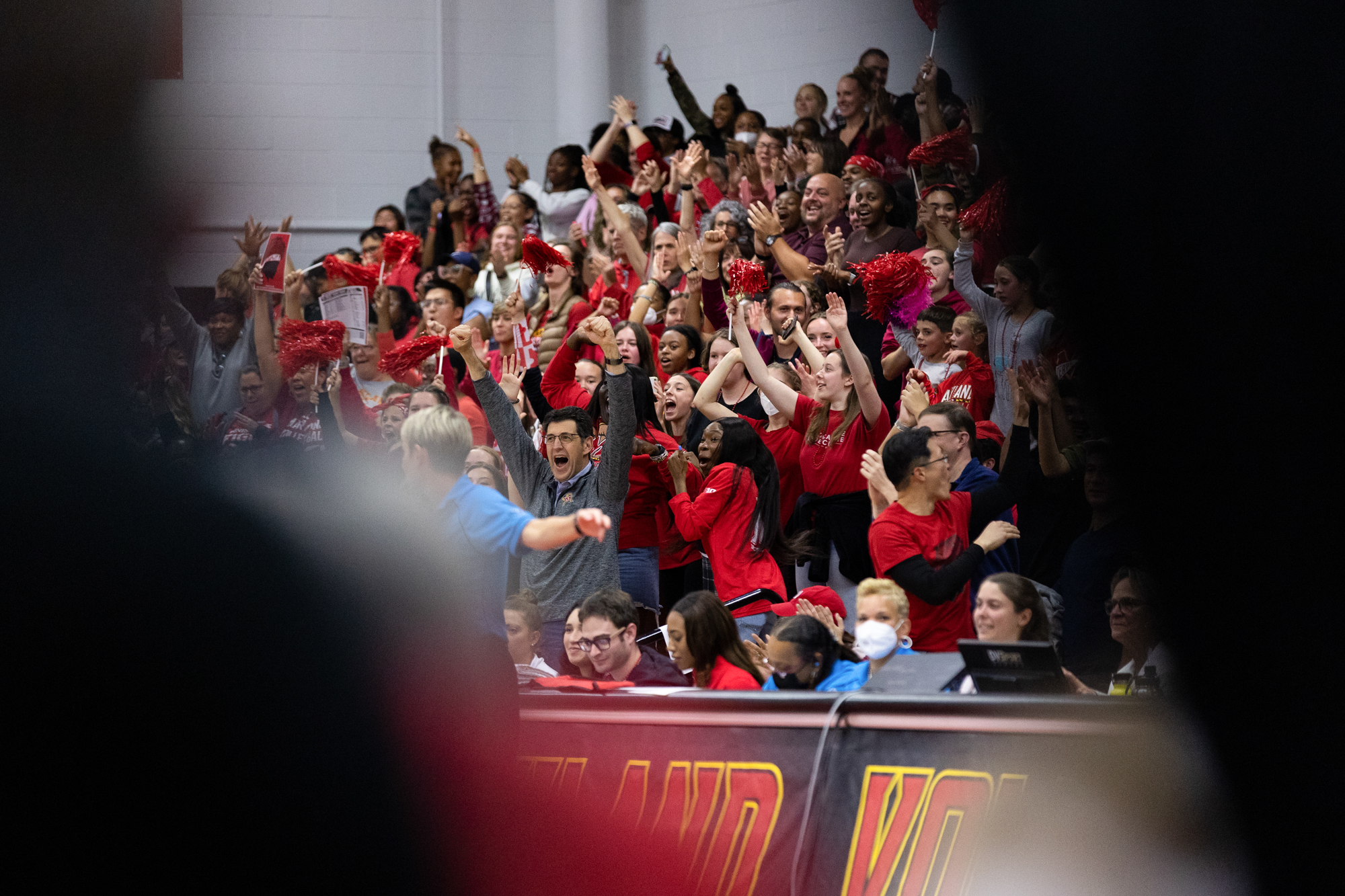 The Terps’ 3-1 win over Iowa was just their third home triumph of 2022 and first in more than two months — a long overdue positive in what has been an otherwise unusually challenging home campaign for the Terps.

“We lost two games in five [sets] and home at the beginning of the season, and that could have swayed things a little bit,” Hughes said. “And then there’s the quality of competition.”

His squad played just three nonconference home matches this season as it opted for a more testing campaign that featured a trio of road trips.

[Maryland volleyball’s late-season skid continues with 3-0 loss to No. 3 Wisconsin]

As a result, a larger chunk of the Terps’ home schedule featured tough Big Ten matchups, including showdowns against ranked teams such as then-No. 3 Nebraska and No. 13 Penn State, both of which ended in 3-1 defeats for the home squad.

But the crowd’s fervent energy at ‘The Pav’ has persisted through Maryland’s down year at home. The team drew 2,113 fans — the second largest crowd to pack the venue in program history – for its Oct. 2 bout against the Cornhuskers. Less than three weeks later, more than two thousand fans flocked to watch the Terps battle the Nittany Lions.

“I don’t have words to describe it,” sophomore libero Milan Gomillion said following the Penn State match on Oct. 21. “That’s how much we love it and we feed off of it most of all … which is so important.”

The Terps will savor every ounce of enthusiasm Friday as they try to keep their postseason hopes alive against a Ohio State squad that is all but a lock for a tournament run.

The No. 5 Buckeyes coast into College Park riding the wave of a 14-game winning streak. Hughes knows his team’s margin for error is slim if it wants to avoid becoming the latest victim of the Buckeyes’ buzzsaw.

“If people give you opportunities or windows, you got to make sure that you’re consistent enough to make the most of that,” Hughes said. “And if you don’t play at your best, you’re basically giving yourself no chance to get in it.”

Friday’s showdown gives Maryland another stab at a signature home win that would provide a vital breath of life to the team’s waning postseason hopes. Even coming off of straight-set losses to a pair of top-10 teams, last week’s effort has the Terps confident they can trip up Ohio State.

“I think the biggest thing that we learned [from the last two matches] is that we can compete with the same teams,” middle blocker Rainelle Jones said. “Even though the score may not say it, I feel like we’re head-on-head with the teams when it comes to stats.”

Maryland will likely have its hands full Friday night fighting for its postseason life against one of the hottest teams in the nation. But the Terps will unquestionably have one distinct advantage when they trot onto their home court among a sea of screaming fans that continue to show up — win or lose.

“[When] I first started here, they weren’t gonna sell tickets to games,” Hughes said after the Penn State match. “And then I’m in the middle of the second set, and I see a police officer with a helmet and the fire marshal trying to shut the door down … We’ve had such good support and we hope [the fans] will continue to support us because it means the world to us.”