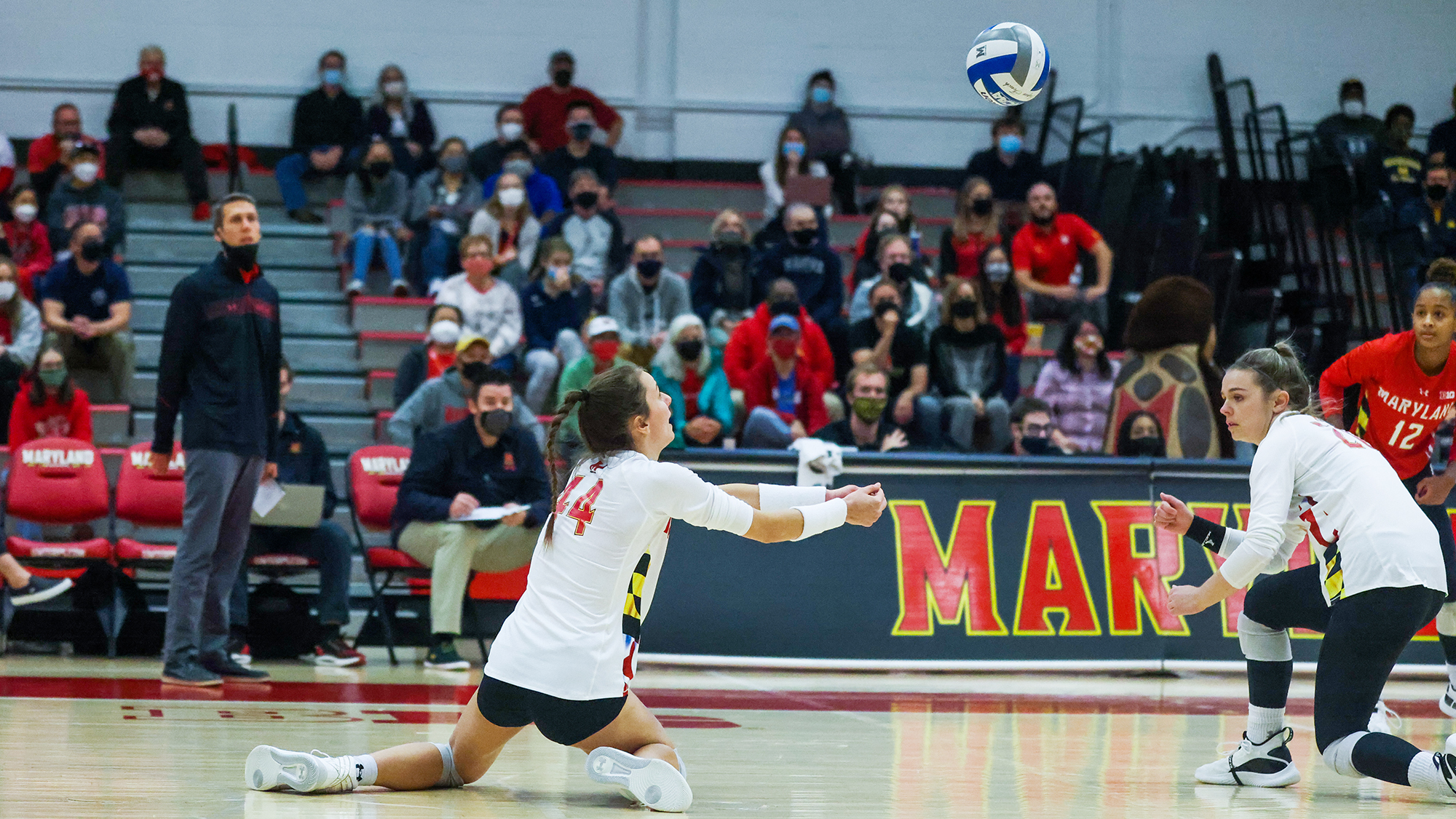 Jenna Wenaas calmly steadied an Erin Engel serve, setting up Melani Shaffmaster to tap the ball in the direction of Arica Davis.

The Minnesota middle blocker greeted Shaffmaster’s feed with a pulverizing kill past a weary Maryland volleyball defense. Davis’ spike was the 39th and final kill for a Golden Gophers squad that made quick work of the Terps, as Maryland fell 3-0 to No. 9 Minnesota in Minneapolis on Friday night.

It was the latest conference setback for the Terps, who stumbled to 5-10 in Big Ten play this season as their postseason hopes continue to dwindle.

“It’s a top-10 team on the road; it’s a tough grinder,” coach Adam Hughes said. “I actually liked the vibe of the group. I thought from start to finish they were playing as hard as they could.”

Seeking its second top-ten win of the season, Maryland received a boost before the first ball was served. Middle blocker Rainelle Jones returned to the court after missing the Terps’ last two matches with a knee injury.

Jones displayed little rust in her return to the lineup, walling a solo block and an early spike for two of Maryland’s first seven points.

But even the return of Maryland’s all-time leading blocker couldn’t equip the Terps to withstand Minnesota’s offensive onslaught.

Propelled by a blizzard of putaways by Taylor Landfair and Wenaas, the Golden Gophers posted a gaudy .289 hitting percentage and used a trio of 3-0 runs to double up the Terps and springboard to an 18-9 lead.

Laila Ivey pulled Maryland to within eight with one of her six kills on the night, but a pair of kills from Wennas and Carter Booth headlined a set-sealing 7-1 run as the Golden Gophers glided to a comfortable 25-12 win.

Following a timeout, Maryland began to chip away at the Golden Gophers’ six-point advantage. Jones built on her hot start with her second rejection and second kill to bookend a 5-2 run that pulled Maryland to within three.

“Just from her experience, it helps on the floor,” Hughes said. “She’s got great IQ, she’s always at a pretty good mental space to give us some positive vibes. It’s good to have her back.”

But when it appeared the Terps had finally settled in, they were promptly pummeled by another commanding Minnesota run.

A Lauren Crowl spike pushed the Golden Gophers’ lead to five and put the ball in the hands of Rachel Kilkelly, who highlighted her run of nine straight serves with three aces in a row to fuel an 8-0 run that put the set out of reach.

“They do a really good job frustrating you,” Hughes said. “They’re a really disciplined defensive team.”

On a roll, Minnesota kicked open the door to the third set with a 9-3 outburst that put Maryland on its heels once more.

But the sting of the Golden Gophers’ rout was patched by the triumphant return of sophomore outside hitter Erin Morrissey, who stepped onto the court for the first time since tearing her ACL in her collegiate debut last August.

Patrolling the left wing in place of a struggling Csire, Morrisey belted three kills to the floor as her teammates erupted in jubilation.

Maryland’s enthusiasm was short-lived, however, as another flurry of Landfair kills, who finished with a match-high 11, swelled the Terps’ deficit further in a 25-16 third-set loss, keeping Maryland winless against the Golden Gophers in 18 tries.