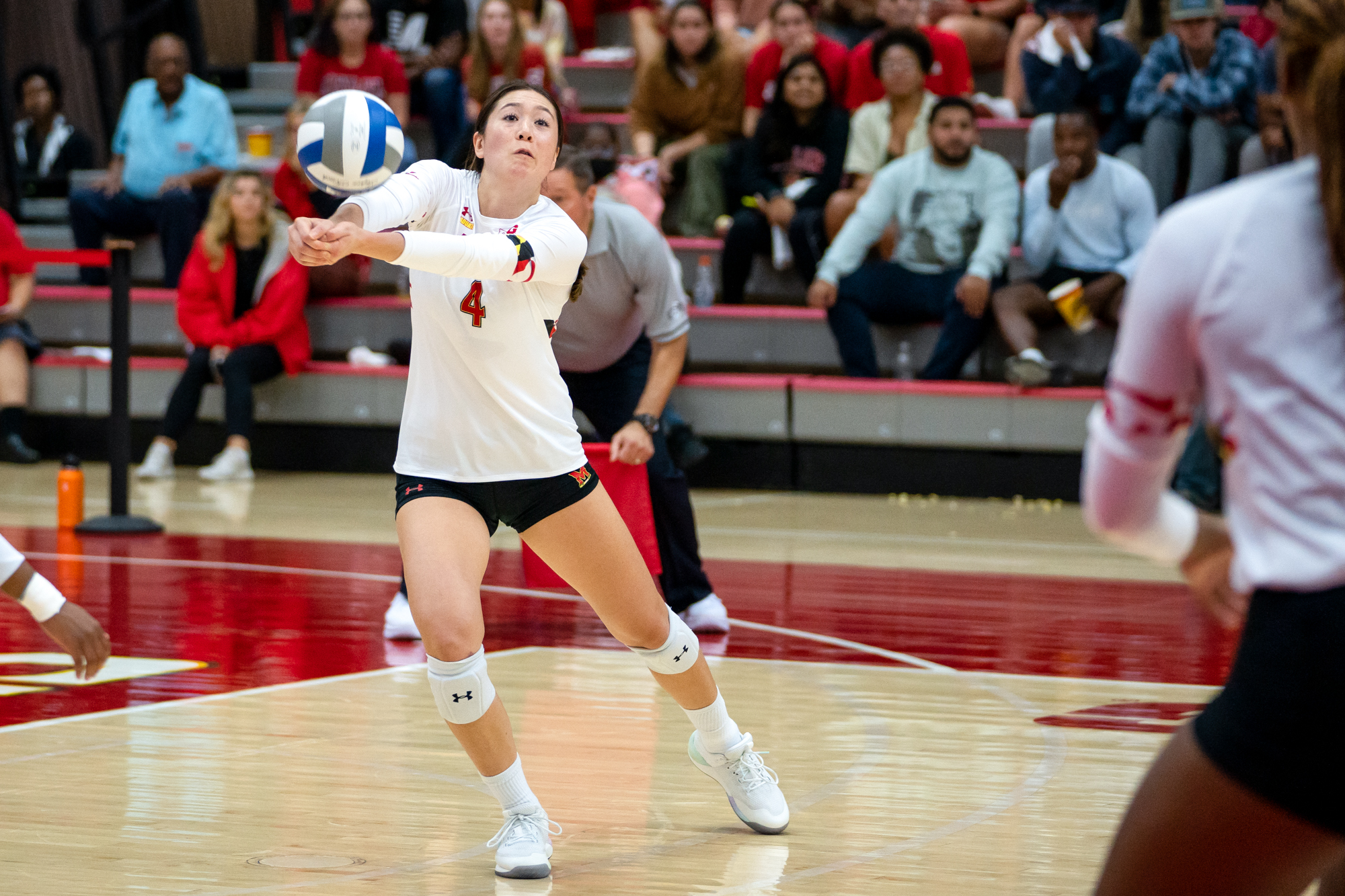 Even with two of its big-time blockers relegated to the bench, Maryland volleyball’s defense found its groove during Sunday’s win over Iowa.

The Terps mended their troubling start after letting the Hawkeyes hit .235 percent in the first set. They racked up 12 blocks to complement 61 digs on the day, all while middle blocker Rainelle Jones and right side hitter Laila Ricks missed their second straight match with undisclosed injuries.

The absence of Jones and Ricks, who entered Sunday’s match as the No. 1 and No. 3 total block leaders on the team, alters Maryland’s defensive identity, coach Adam Hughes said.

“We’re definitely a little bit different without those guys,” he said. “I think they’re both physical blockers … that’s kind of been our bread and butter.”

But Sunday’s defensive display was an encouraging sign: Hughes’ squad can still stymie its opponents even without two of its best defenders.

Ellie Watson filled in for Jones at middle blocker and set a career high in blocks. She swatted eight Hawkeye attacks a match after she registered three stuffs against Penn State in her first career start.

“I think [Watson] is realizing [after] the Penn State match, that she can play at this level,” Hughes said. “But I want a little bit more from her.”

Maryland’s hustle extended through the lineup as Milan Gomillion, Sam Csire and Sydney Dowler all tallied double-digit digs. The Terps limited the Hawkeyes to 49 kills just 10 days after they shelled them with 59 putaways in the teams’ first meeting.

Gomillion, who led the Terps with 18 scoops, emerged in Jones’ absence as the headliner of a Maryland defensive unit — one that logged at least 60 digs for just the fifth time this season and held its opponent to a sub-.200 hitting percentage for the first time in six matches.

“I think Milan realized that we’re not playing up to her standards, and she wanted people to step up a little bit and I thought she did a good job vocalizing that,” Hughes said. “Sometimes that’s where accountability comes from.”

Following a leaky first set, the Terps’ defense solidified throughout the match as Maryland flipped a 1-0 deficit to a 2-1 advantage. Hughes’ squad trimmed the Hawkeyes’ hitting percentage from .235 in the first set to an inept .000 in the third.

Maryland’s liveliness persisted even in the match’s most arduous stages. Twenty of the team’s 61 digs came in a back-and-forth fourth set where Maryland staved off an Iowa rally and ultimately prevailed, 27-25.

“We came together and we said, ‘This is all we have. We got to communicate. We got to work together. We can get through this,’” senior defensive specialist Lexy Finnerty said. “We just [had] to really be on everything and control our side more than focusing on their side too much.”

Despite stumbling in the first set against a team that entered Sunday’s match losers of seven straight, the Terps regained their traction without key defensive pieces and clamped down to eke out their first Big Ten home win of the season.

“If we’re not as strong in one area, we can find ways to win in different places,” Hughes said.