Maryland volleyball leaned on its bench players against Penn State 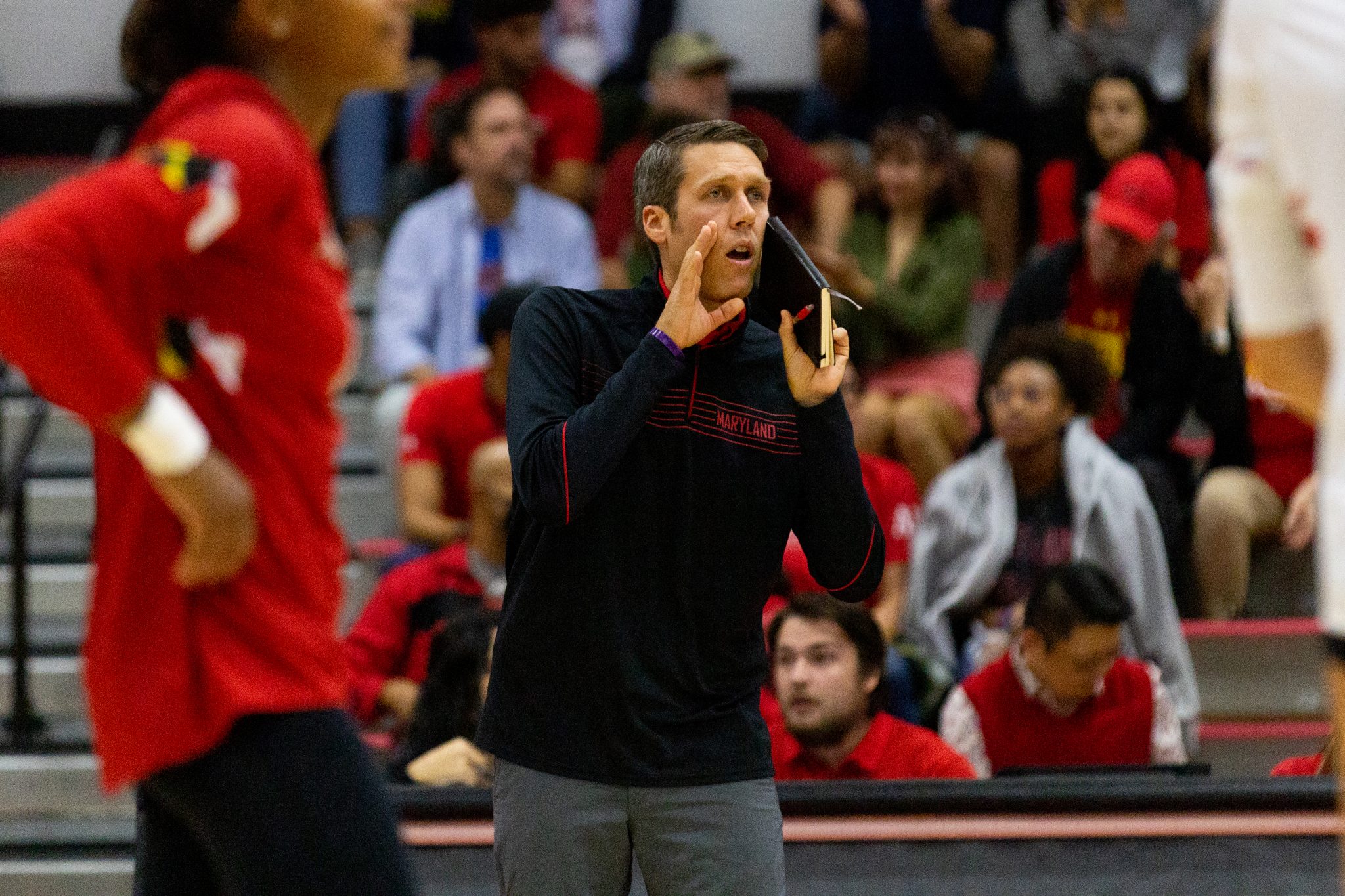 When Maryland volleyball coach Adam Hughes attempted to craft the ideal lineup for his team’s match against No. 15 Penn State, his options were slimmer than usual.

For the first time this season, Hughes was down two of his best defenders. Middle blocker Rainelle Jones and right side hitter Laila Ricks were ruled out of Wednesday’s match with undisclosed injuries.

That left Hughes just 12 players at his disposal against his alma mater, whom the Terps sought to snap a 23-match losing streak against on Wednesday.

“It was a short week … just kind of a turn-and-burn,” Hughes said.

With just three days to prepare for the Nittany Lions following their match against Nebraska in Lincoln on Saturday, the Terps had to quickly piece together a lineup after learning about Jones’ and Ricks’ injuries on Monday.

“We made some modifications on Tuesday … went through some rotations,” Hughes said. “I think the team was well aware of what was going on [and] what we were gonna go with.”

With limited depth, Hughes summoned a pair of role players to make spot starts in a critical road match for a Maryland team desperately trying to remain afloat in the Big Ten standings.

Sophomore middle blocker Ellie Watson and graduate pin hitter Gem Grimshaw had played just 20 sets combined this season heading into Maryland’s match, but Hughes was confident in both of his seldom-summoned players to fill in for Jones and Ricks.

“Those guys compete all the time,” Hughes said of Watson and Grimshaw. “We knew they would step up in their roles.”

Watson and Grimshaw had big shoes to fill on Maryland’s front line, as the pair took over for two of Maryland’s three leading blockers in Jones and Ricks.

But the unlikely duo held its own against a Penn State attack that had shredded a healthy Terp defense with a 65-kill onslaught in the teams’ first meeting on Oct. 21.

Both players logged three block assists for a Maryland defense still trying to rediscover its mojo following a season-low five block outing in its previous match. The Terps finished with 11 blocks against the Nittany Lions.

Offensively, Watson energized her squad out of the gate before Grimshaw injected life into her team late in the contest.

Making her first-career start, Watson confidently took big swings from her middle blocker position early and often, connecting on a flurry of putaways to give Maryland three of its first eight points in the opening frame.

“I thought Ellie did a great job,” Hughes said. “She’s very good [hitting] off one foot. It’s one of the specialties that she’s been good in our gym with.”

Meanwhile, Grimshaw’s rugged experience was prominent as the heat of the Big Ten battle intensified. After the Terps fought back to win the third set, Grimshaw deposited four kills for her short-handed squad in the subsequent frame, including back-to-back putaways that pulled Maryland even at 19.

“Gem’s a vet, and I thought she did a good job making good decisions,” Hughes said. “She handled the ball pretty well for us.”

The duo combined for 14 putaways, six blocks and six digs in a losing effort as Maryland wilted late in the fourth set and dropped to 4-9 in conference play this season.

But with limited preparation for a road battle against a ranked program, Hughes praised Waston’s and Grimshaw’s adaptability, which nearly boosted the depleted squad to a fifth set.

And with the duration of Jones’ and Ricks’ ailments unknown, Hughes may continue to lean heavier on both his young middle blocker and his tenured pin hitter throughout the season’s closing stages.

“All things considered, I thought [the team] rallied with [Watson and Grimshaw],” Hughes said. “But at the same time, we see those guys do that in practice. They got an opportunity and gave us a window to win.”