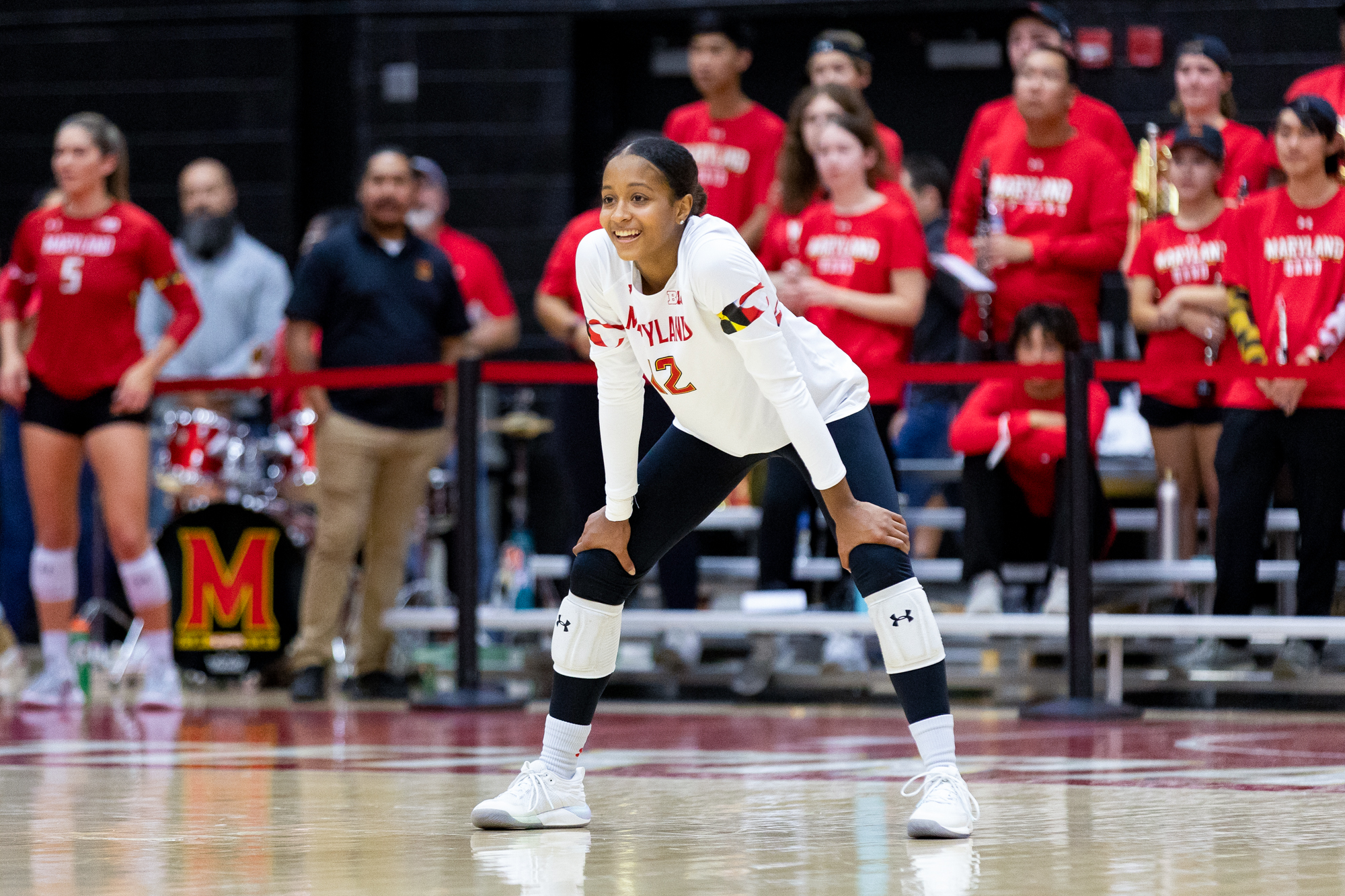 Trailing by eight points midway through the third set against Nebraska, Maryland volleyball seemingly had every reason to quit.

The Terps were on the brink of being swept out of the Devaney Center for the third consecutive meeting after suffering their most lopsided set defeat of the season, a 25-9 second-set beatdown by the nation’s No. 1 team.

Leading scorer Sam Csire had been benched earlier in the contest as Maryland’s offense looked lifeless against a stout Cornhusker defense that went on to become the first team this season to out-block Maryland in a match.

Nebraska had already registered three more stuffs in the third set and seemed poised to glide to another easy victory as the Terps found themselves in a 12-4 hole.

But a familiar voice in Maryland’s huddle suddenly sparked the sputtering Terps.

“I was really proud of Milan [Gomillion],” coach Adam Hughes said. “I thought she did a good job of trying to fire everyone up.”

[Maryland volleyball swept by No. 1 Nebraska, 3-0]

Spurred by the leadership of their sophomore libero, Maryland scrapped its way out of Nebraska’s chokehold to spin what seemed to be another blowout into the night’s most competitive set.

“I told everybody to look at the score and get inspired,” Gomillion said. “Because we were that close and just to really believe in each other. And you know, we can win this set.”

Gomillion had a busy night in the back row, fielding an array of Nebraska attacks that knifed through a typically formidable Maryland front. She also chipped in five assists, including two during a Terp rally that gained steam with each crowd-silencing point.

With her team trailing 12-5, Gomillion steadied a Nebraska attack and sent a feed toward setter Sydney Dowler, who cannoned the ball to the floor with a left-handed finish as the Terps began to claw back. Later in the frame, the libero scurried to the middle of Maryland’s zone and bumped a lob over to Laila Ricks, who muscled a spike off of a pair of Nebraska blockers that trimmed the Huskers’ lead to two.

And after a flubbed set by Nebraska’s Anni Evans on the ensuing rally, the rejuvenated Terps were just a point away from pulling even with the nation’s top team.

“I thought there was a little bit more fight in the third,” Hughes said. “It was really loud there.”

Back-to-back Cornhusker kills on the next two rallies gave them just enough breathing room to fend off the Terps’ pesky comeback as Nebraska completed the sweep with a 25-19 victory.

But behind Gomillion’s tenacity, Maryland’s grit in the face of a seemingly insurmountable deficit was an encouraging takeaway from one of its roughest outings this season.

“I think the positive we can take away is that we did support each other, we did uplift each other,” she said. “And we were there for each other when someone wasn’t at their best.”