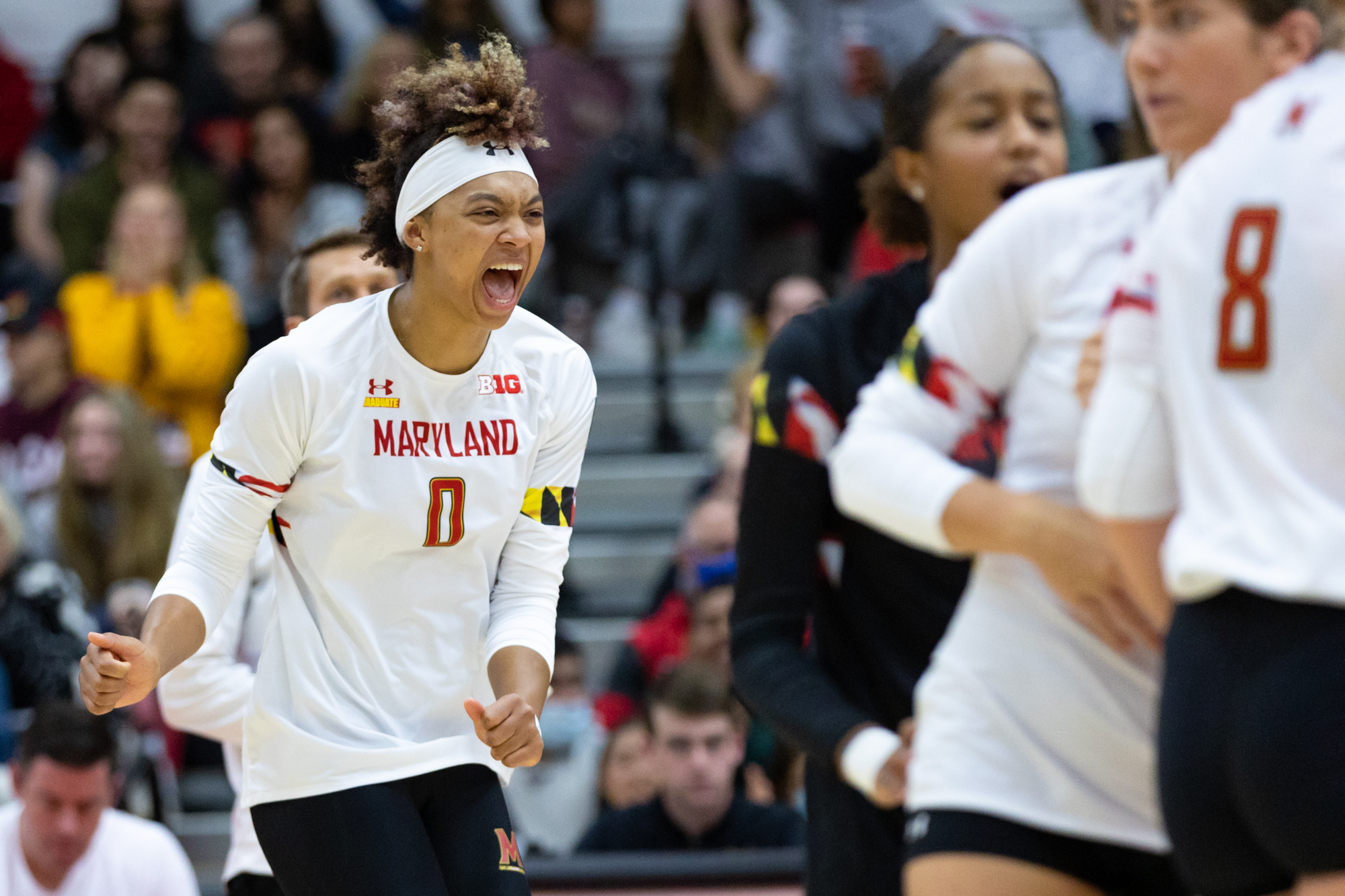 Sitting on match point amidst a fourth-set offensive onslaught, Maryland volleyball looked to pound home one final kill that would cap off a crucial comeback victory against the Iowa Hawkeyes.

But the Terps didn’t need to.

Iowa’s Addie VanderWeide watched her serve sizzle into the net and fall to the floor, extinguishing any Hawkeye hopes for a five-set finish.

Iowa’s ninth service error of the night cemented Maryland volleyball’s furious fourth-set rally for the Terps, who downed the Hawkeyes 3-1 in Coralville, Iowa for their seventh road win of the season.

“Pretty proud of the effort in the fourth there,” coach Adam Hughes said. “They stayed composed, they kept going.”

Using 12 kills from the outside-hitting trio of Sam Csire, Laila Ricks and Laila Ivey, the Terps rallied to stun Iowa in the fourth frame.

Trailing 2-1 entering the set, Iowa relied on a balanced offensive attack that out-killed Maryland by 11 on the night and raced out to a 14-7 advantage. But Ivey’s second of five kills in the frame got the Terps going, and her final putaway of the night gave Maryland a 23-22 lead it wouldn’t relinquish.

“Even though we were down, we were talking a lot about ‘one point at a time’ to keep closing the gap,” middle blocker Anastasia Russ said. “And we were able to finish and pull through.”

Led by their acclaimed middle-blocking tandem of Russ and Rainelle Jones, the Terps wasted little time jumping on a struggling Iowa squad that entered the Big Ten bout with a loathsome 1-9 conference record.

Russ paced the Terps with four kills in the opening set, while Jones drove two spikes past a porous Iowa block that surrendered 13 Maryland putaways on just 32 swings.

The duo each swatted away a pair of Iowa attacks, including a thunderous solo block from Jones that propelled the Terps to a 25-18 first set win.

But despite a dominating outing in set one, Maryland’s defense began to soften in the second frame. Behind five of Michelle Urquhart’s match-high 14 spikes, the Hawkeyes began finding success from up close, using a cluster of tip-kills to keep the Terps off-balance.

Urquhart fooled Maryland with back-to-back offspeed finishes as Iowa clawed to a 17-13 lead that forced coach Adam Hughes to exhaust a timeout.

Two more Hawkeye points spelled another whistle from the Maryland bench, but it did little to slow a suddenly sizzling Iowa offense that smoked the Terps with 16 kills on a .448 hitting percentage.

“There was a complete flip the other way [in the second set],” Hughes said. “They put some more pressure on us from the endline and they were passing very well.”

The Hawkeyes responded to the Terps’ solid opening frame with a set two victory, but had no answers for Russ in the third stanza. She pummeled three more putaways to spearhead Maryland’s attack in a pivotal swing set.

With the Terps leading 10-8, the Pitt transfer capitalized on one of setter Sydney Dowler’s 31 assists on the night and sparked a Maryland stretch that blew the set wide open.

After Russ’ second kill, the Terps rattled off nine of the next 12 points and built a 20-11 lead that proved too much for Iowa’s hot offense to parry. Russ polished off her dominant frame with two more blocks to push the Terps a set within a much-needed win.

“I think our speed and our tempo really helped to get around their block because they didn’t have the more physical players that we’ve seen this year,” Russ said. “So definitely beating them with our attacking speed was super helpful.”

Iowa’s offensive weapons were on full display in the fourth frame, headlined by Delaney McSweeney, who bombarded Maryland with four of her 11 kills to push Iowa ahead 14-7.

But the Terps caught fire after Ivey’s kill, finishing the fourth set with 15 kills and clocking a .349 hitting percentage en route to their fourth-straight road victory.