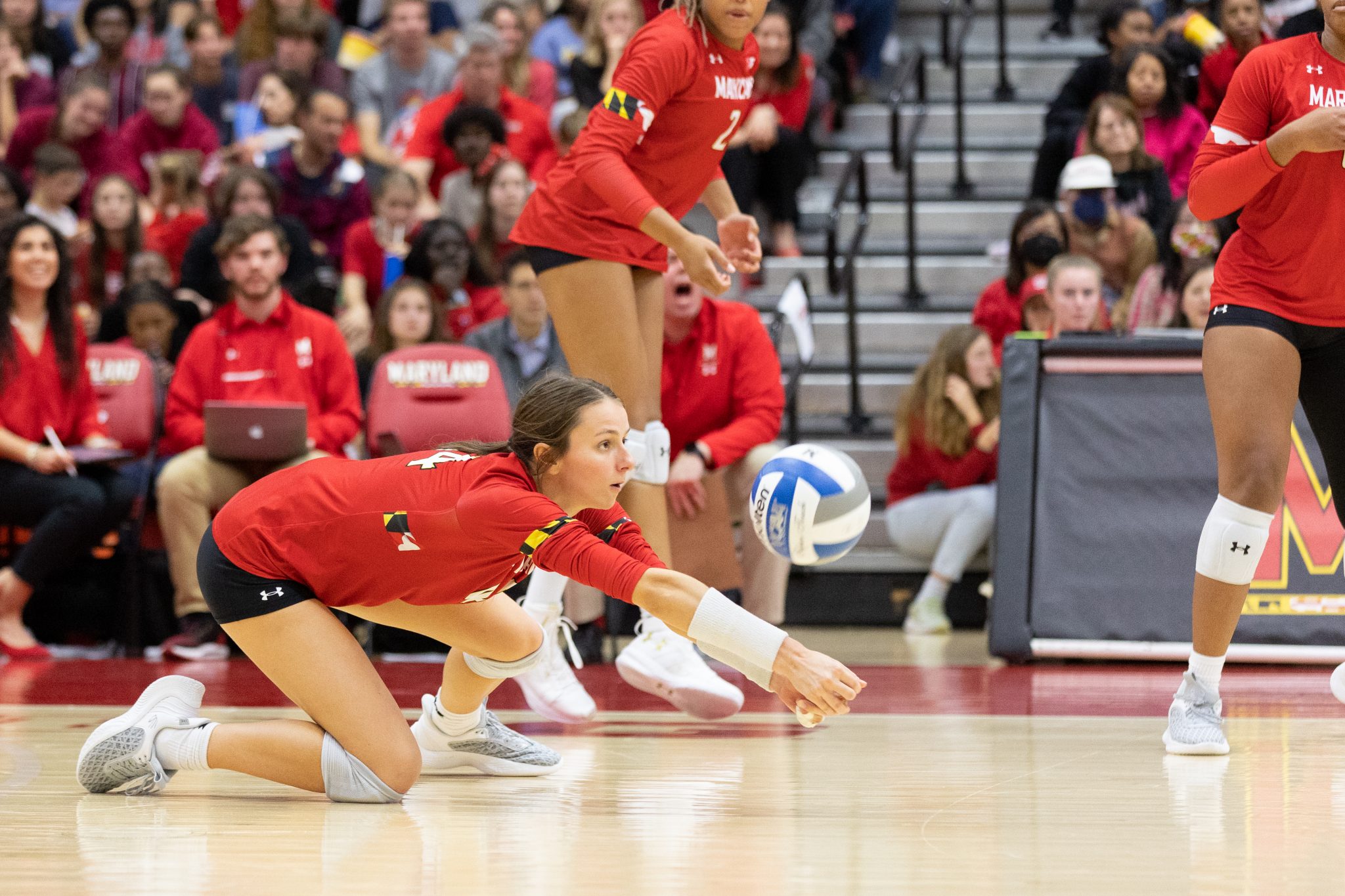 With a match point opportunity in hand, Penn State’s Alexa Markley confidently sent a blazing attack through a vacant hole in a worn-down Maryland defense that glanced the court just before it sailed out of bounds.

Markley’s eighth putaway gave the Nittany Lions their 62nd and final kill of the night as No. 13 Penn State emerged from College Park with a 3-1 victory over the Terps, snapping Maryland’s three-game winning streak.

The Terps have now lost 23 in a row to the Nittany Lions in a losing streak that dates back to 1983.

“I think we just didn’t handle the ball very well, and they had a lot more swings,” coach Adam Hughes said. “Realistically, we had 108 swings and they had 138 swings, and you’re gonna lose a matchup like that.”

The Terps had no answer for a lethal Nittany Lion attack headlined by their leading scorer, Kashauna Williams, who finished with 13 kills. But it was her supporting cast that gave Hughes’ squad the most fits.

“The matchup that probably hurt us the most was Zoe Weatherington,” Hughes said. “And you know, the other matchup that cost us was Allie Holland … as coaches, we did not find an answer.”

The duo combined for 24 kills against just seven errors as the Terps found themselves scrambling to keep up with Penn State’s tenacious offense.

The first set went down to the wire as the two sides exchanged blows.

Anastasia Russ and Laila Ricks energized the Maryland crowd early, teaming up to block a Markley attack that drew a roar from a sea of red-clad Terp fans.

But Maryland could not overcome a 17-kill Nittany Lion ambush in the first frame, including five from Williams and six between Holland and Weatherington.

Meanwhile, the Terps’ offense floundered in the first set, pushing across just seven kills as Penn State limited the home squad to a .083 hitting percentage.

With the Nittany Lions leading 23-22, Markley muscled a kill through the Terps’ block that gave her team a handful of set points to work with. They capitalized on the ensuing play to snap Maryland’s nine-set winning streak.

The Terps quickly parried once their offense woke up behind a 14-kill second stanza, including seven by Sam Csire.

Maryland went up 19-12 when setter Sydney Dowler sent back a Penn State spike with an emphatic solo block that spelled a Penn State timeout as the rejuvenated Pavilion crowd rose to its feet.

But when it appeared the Terps were about to lock up a pivotal set victory, the Nittany Lions roared back with a bevy of service aces to tie the stanza at 23.

“They served us tough,” sophomore libero Milan Gomillion said. “I think that’s what we struggled with … to start and at the end, too.”

[Maryland volleyball showed its poise in upset win against Purdue]

Maryland remained composed, however, and watched a Penn State serve sail out of bounds to give the Terps their first set point opportunity of the night.

Russ then slammed the door on Penn State’s comeback when she cannoned a Penn State overpass down to the floor.

Even after Penn State began the third stanza on a 12-4 tear, Maryland battled back. But it could not tame a potent Nittany Lions attack that hammered down 15 more kills and clocked a .423 hitting percentage en route to victory.

Behind a pair of aces by Dowler and four of Csire’s 12 kills in the match, the Terps pulled to within 21-19. Then, Williams struck again, catapulting a kill that withstood a challenge by Maryland coach Adam Hughes and spurred the visitors to an eventual 25-21 triumph.

The Terps looked to keep their winning streak alive in the fourth frame and benefitted from four Laila Ivey spikes to erase an early Penn State lead and knot the stanza at 19.

But the Nittany Lions’ balanced offense overwhelmed Maryland, as 17 more kills in the fourth set buried the Terps and snapped their three-game winning streak as Penn State skipped past Maryland 25-22.