Maryland volleyball showed its poise in upset win against Purdue 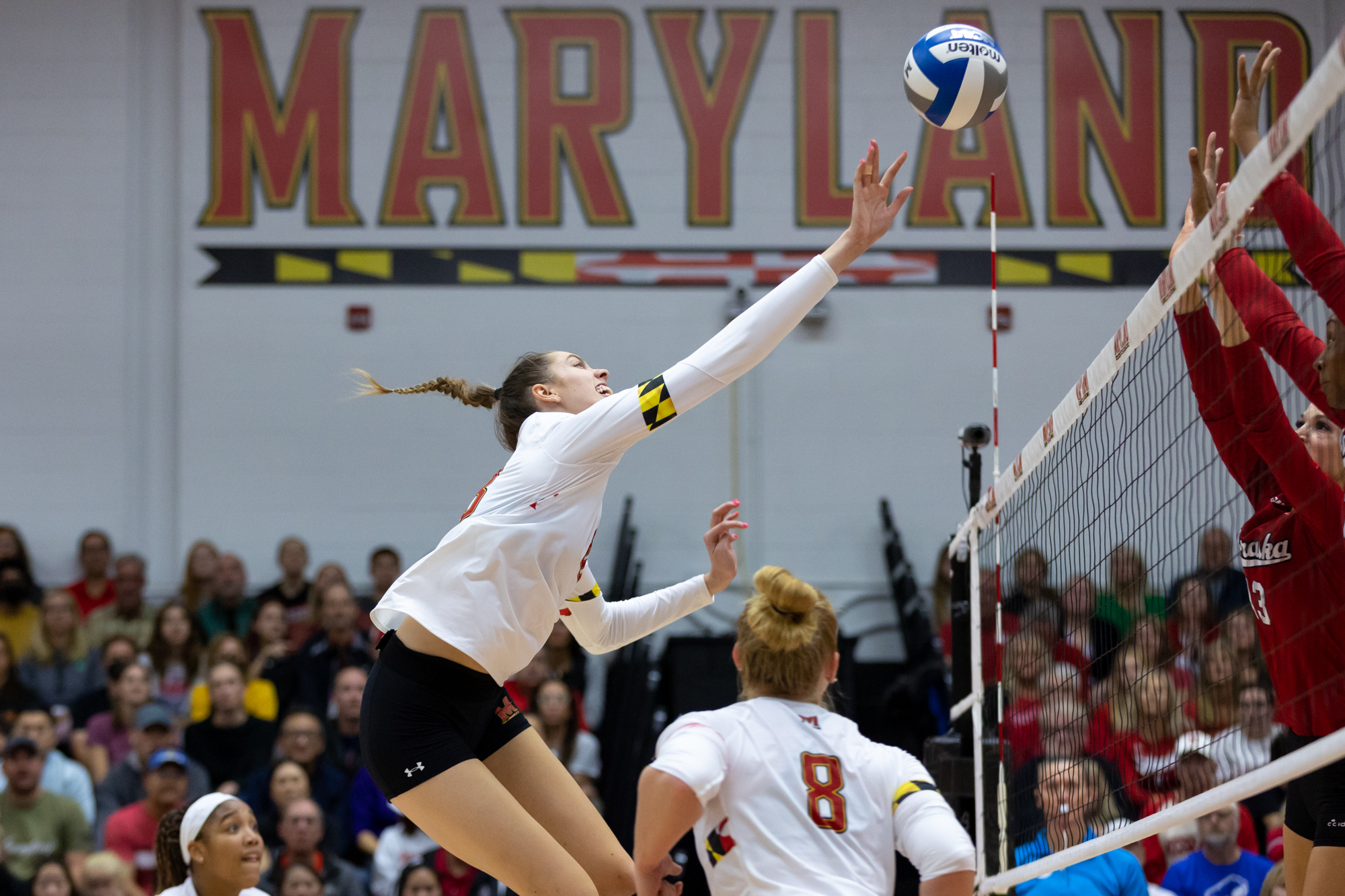 Maryland volleyball’s frustration was beginning to mount. Amid a 0-5 start to their conference campaign, the Terps struggled to pull away and win pivotal sets.

“It’s definitely frustrating,” middle blocker Anastasia Russ said following Maryland’s five-set loss to Michigan State Sept. 30. “We have a lot of new pieces working together this year, so trying to figure out how to finish games.”

The Terps faced no shortage of pressure-packed situations in their recent road matches against Northwestern and Purdue amid the roar of rowdy Big Ten crowds.

But this time, Maryland weathered the game’s rattling atmosphere and showcased a sense of poise that had been lacking in past matches. The Terps orchestrated an array of critical scoring runs to twice emerge from enemy territory with a coveted Big Ten victory.

That composure surfaced immediately against Northwestern. Maryland fell behind 22-19 in the first set after struggling to tame a relentless Wildcat attack that wallopped 18 kills in the opening frame.But before the purple-packed Northwestern stands could erupt, Maryland used a timeout to regroup and rip off the next 11 points to swipe the first set and blaze to a 5-0 lead in the second.

Even when Northwestern fought back to knot the frame at 20, coach Adam Hughes’ squad calmly orchestrated a five-kill finish to seize a commanding two-set lead. With the once-spirited crowd reduced to a murmur, the Terps polished off their second consecutive sweep with a 25-16 decision in set three.

But perhaps Maryland’s grittiest sequence came in its next match against Purdue.

After pummeling the ninth-ranked Boilermakers into a two-set hole, the Terps were a set away from another sweep before Purdue began to click in the third frame.

With Maryland trailing 18-13, Hughes summoned his team to the bench to gear up for another rally.

And as the pressure peaked, so did the Terps.

Even after Purdue scored three of the first five points out of the timeout, Maryland steadied itself and engineered a 10-2 run to stun the Boilermakers on their home court.

Following a Laila Ivey block that punctuated the Terps’ first top-10 road win as a member of the Big Ten, a sea of red Maryland jerseys flooded the floor to celebrate a win that has the Terps wondering just how dangerous they can be.“I believe in each and every one of these girls and this team so much,” Dowler said. “We have so much talent, and we’re just playing the game we wanted to play together.”

For Hughes, his team’s resiliency mirrors that of another Maryland program.

“I watched [Maryland football coach Mike] Locksley and the guys have some setbacks and some unfortunate situations, and those guys are resilient, you know, [they] come back and find ways to win,” Hughes said.

“We’ve had the same kind of season … we’ve had a few losses that we would love to have gotten back, but this group doesn’t stop. They keep working.”

Winners of three in a row, Maryland has seemingly rediscovered its mojo as the meat of the conference schedule looms. With 12 games remaining, the Terps will have plenty of opportunities to vanquish other fearsome foes.

Four of their remaining opponents are currently ranked in the top 10.

With the sting of a five-game losing streak healed by the bliss of a top-10 win, Maryland’s season has suddenly gained steam. And with a battle with Penn State on the horizon, its upcoming slate could perhaps be the most revealing tale of the Terps’ fate this season.