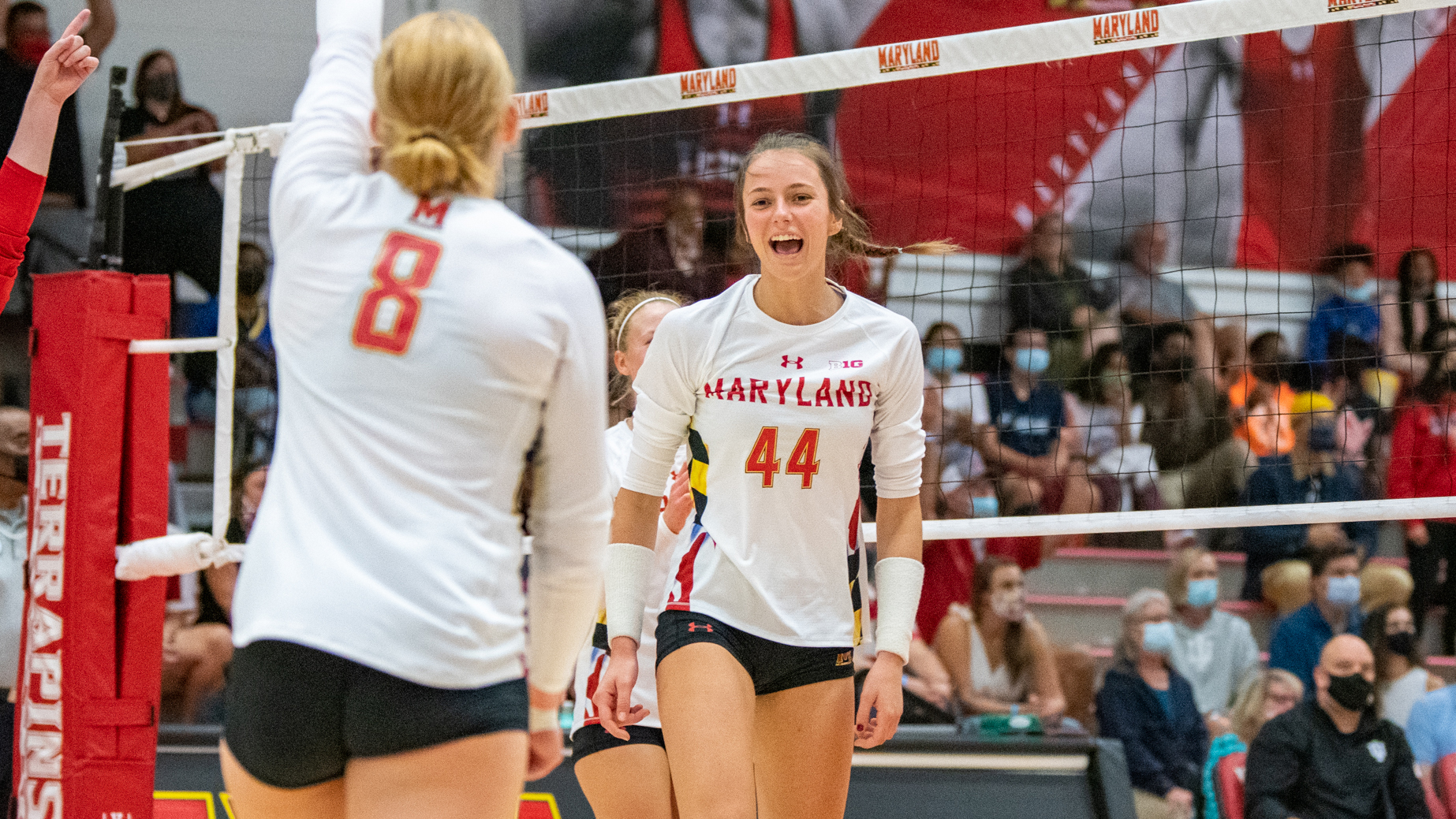 Sam Csire vaulted into the air, cocked her arm back and sent a lethal attack in the direction of Northwestern outside hitter Temi Thomas-Ailara.

On a night when two of the Big Ten’s top outside hitters went toe-to-toe, it was Csire who one-upped her star outside-hitting foe, as her ninth kill of the night ricocheted off Thomas-Aliara and gave the Terps a pivotal 22-21 lead.

Csire’s putaway – one of her team-high 16 on the night – paved the way for a critical second-set Maryland win as the Terps romped to their second consecutive sweep, defeating Northwestern 3-0.

“Good composure in the first [set],” coach Adam Hughes said. “I thought [we had] another good moment in the second where I think it was 20-all … we were a little high-error in the first six or seven points [in the third set] but then just settled down.”

Csire was complemented by her fellow outside hitter, Laila Ivey, who hammered down 10 kills for the Terps as she continued to settle into Big Ten competition.

On a night where each squad parried the other with 41 kills apiece, efficiency was paramount, and the Terps were the cleaner team. Maryland finished with just 11 attack errors, while the Wildcats racked up 22 mishits.

Entering play second in the Big Ten with 13.86 kills per set, Northwestern jumped on the Terps out of the gate, clobbering 18 kills in the first frame.

Maryland struggled to corral the duo of Thomas-Ailara and Hanna Lesiak in the early stages, as the pair gouged the Terps with 13 combined kills in the opening set.

Lesiak’s sixth kill of the stanza pushed the Wildcat lead to 22-19, but the Terps embarked on a furious rally that flipped the set on its head.

“That’s usually the MO with Milan,” Hughes said. “She makes some really amazing saves … ones that I don’t think a lot of other people can make.”

The Maryland onslaught bled into set two, as Russ and Laila Ricks teamed up to wall three consecutive attacks and push the team out to a 5-0 lead.

Ricks was paramount in the Terps’ effort to cool off Thomas-Ailara following her blazing start, as Northwestern’s leading scorer was bottled up by a Maryland defense that racked up 13 total blocks. Thomas-Ailara logged just three kills after the first set.

“I thought Laila Ricks had a phenomenal match,” Hughes said. “She was on [Thomas Ailara], she was confident and she was making big moves … she had a good offensive performance for us tonight too. And when she puts that together, you know, it’s a huge day for us.”

With their top attacker held in check, the Wildcats weathered a six-kill stanza from Ivey and clawed back into the set with a fervent rally of their own, using an 8-2 push to reinvigorate a spirited Welsh-Ryan Arena crowd.

Once again, though, the Terps broke a late-set tie and wrestled away a lead they wouldn’t relinquish.

With the frame even at 21, Csire went right at Thomas-Ailara before following up with two more kills to seal another gritty 25-22 triumph.

And with one set win separating them from another sweep, the Terps did not let off the gas.

Five more kills from Csire polished off another sparkling Maryland offensive display in a 25-16 final set victory. The Terps finished with 41 kills against just 11 errors and waltzed out of Welsh-Ryan Arena with their second straight road sweep.