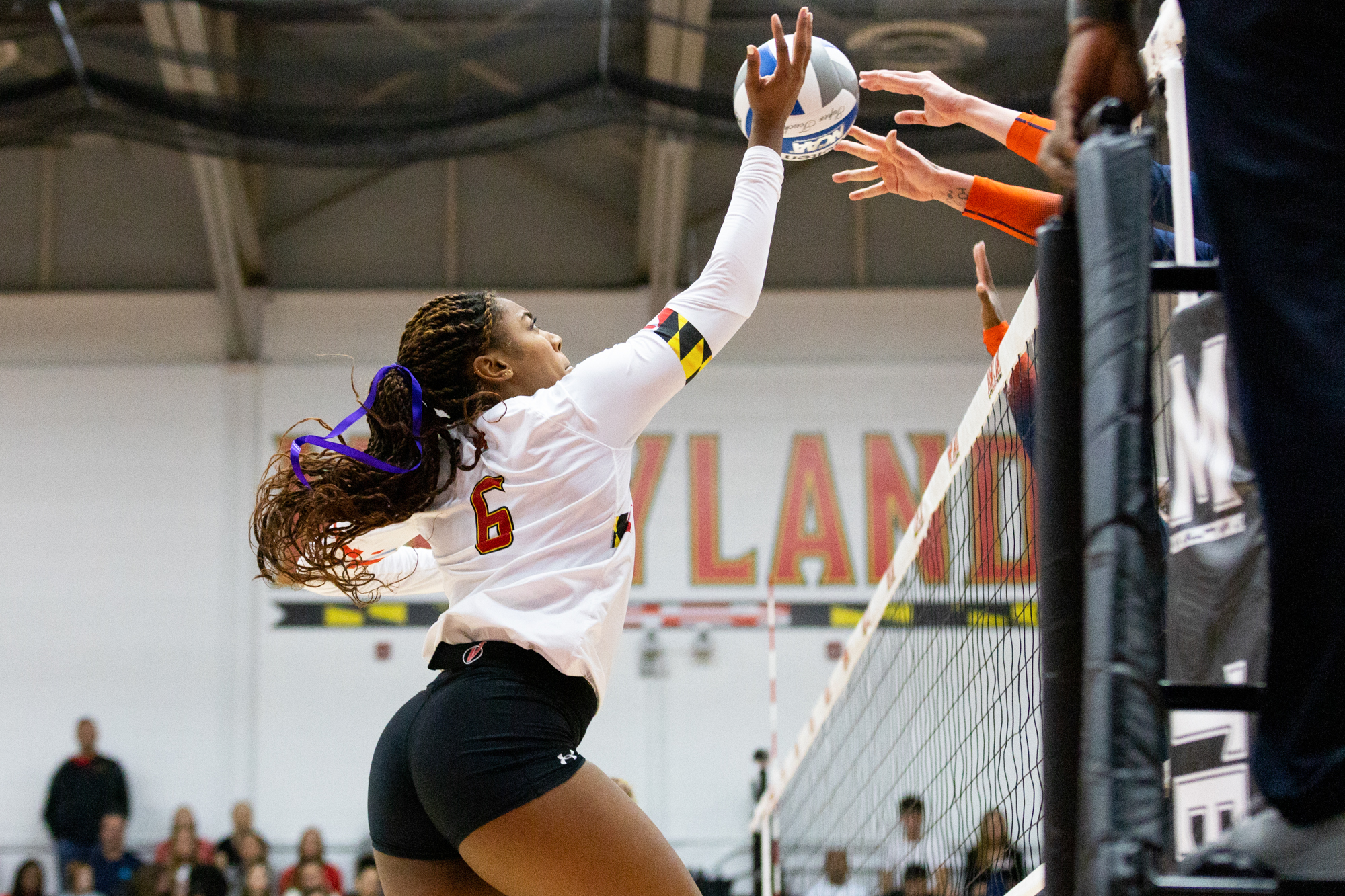 Laila Ricks attempts to tip the ball over the net during Maryland volleyball's 3-0 loss to Illinois on Oct. 7, 2022. (Riley Sims/The Diamondback)

Maryland volleyball’s first conference win was a much-needed boost during the team’s roughest stretch of the season.

The Terps snapped a five-game skid with a victory over Rutgers Sunday and notched their elusive 10th win as they approach tough matchups in conference play.

While charting their first conference win in six tries may have relieved the Terps temporarily, Maryland has not let up in its push to climb back into the thick of the Big Ten standings.

“I don’t think any of us are satisfied with our performance as a team,” right side hitter Laila Ricks said. “We’re still hungry for growth and wins.”

Ricks and company take the road with a chance to churn out two more victories in their next matches against Northwestern and Purdue, but Maryland must find a way to slow down two of the Big Ten’s top scorers.

The Terps’ first matchup is against a 13-5 Wildcats team that has already surpassed their win total from last year.

Northwestern coach Shane Davis’ team is led by explosive senior outside hitter Temi Thomas-Ailara, whose 4.50 kills per set average in Big Ten action is third best in the conference.

“I would like her to graduate as soon as possible,” coach Adam Hughes said jokingly of Thomas-Ailara. “She’s an exceptional attacker … The one thing that is also very challenging about her is that you could set things up perfectly, and she can find ways physically to just beat you in certain situations.”

Last season, Thomas-Ailara dumped 39 kills on Hughes’ squad across the team’s two meetings, as each team prevailed in a five-set victory on the other’s home court.

As a unit, the Wildcats power down 13.86 kills per set in conference play, good for second in the Big Ten. Northwestern’s potent offense gutted then-No. 7 Minnesota with 63 kills on Sept. 28 in one of the Wildcats’ two top-25 victories this season.

The Terps battle an improved Northwestern team before a duel against No. 9 Purdue.

After a day off, Maryland will get its first look at Purdue and star outside hitter, Eva Hudson. The freshman’s sliced her way through some of the nation’s elite defenses to the tune of a 4.79 kills per set average in conference play, which is tied for first in the Big Ten.

“The thing I like watching about Eva is that she’s a really fiery individual,” Hughes said. “You just watch her take a big hack in a clutch situation, and she’s kind of letting everybody know where she is on the floor. Seeing that is … rare, but you notice that, and I haven’t even seen her play live. She’s had a tremendous year for them.”

Behind Hudson, the Boilermakers have built upon last season’s trip to the NCAA quarterfinals with a 14-2 record and a No. 9 national ranking. Purdue will look to rebound at home after suffering its first home loss of the season in its last match against then-No. 7 Wisconsin on Oct. 8.

“I don’t think people … respected what Purdue was going to be this year,” Hughes said. “And here they are battling this early in the season [to] potentially … win the Big Ten. It’s a credit to [head coach] Dave [Shondell], he’s done a great job with that staff.”

In addition to dealing with two of the conference’s most prolific scorers, the Terps will also have to battle the fatigue that comes with playing back-to-back road matches.

A day off on Saturday serves as a double-edged sword for Hughes’ squad, who get an extra day to make adjustments at the expense of missing a potential recovery day on Monday.

“There are some advantages from match preparation,” Hughes said. “But from a stress and student-athlete load … it does put a lot more strain on our athletes.”

While the Terps savored their first Big Ten win Sunday, Ricks and her teammates remain sternly focused on the opportunity to stack two more vital victories amid the challenges ahead.

“In a team culture aspect, I think we’ve been the same,” Ricks said. “We’re still energetic and fun and click very well together.”