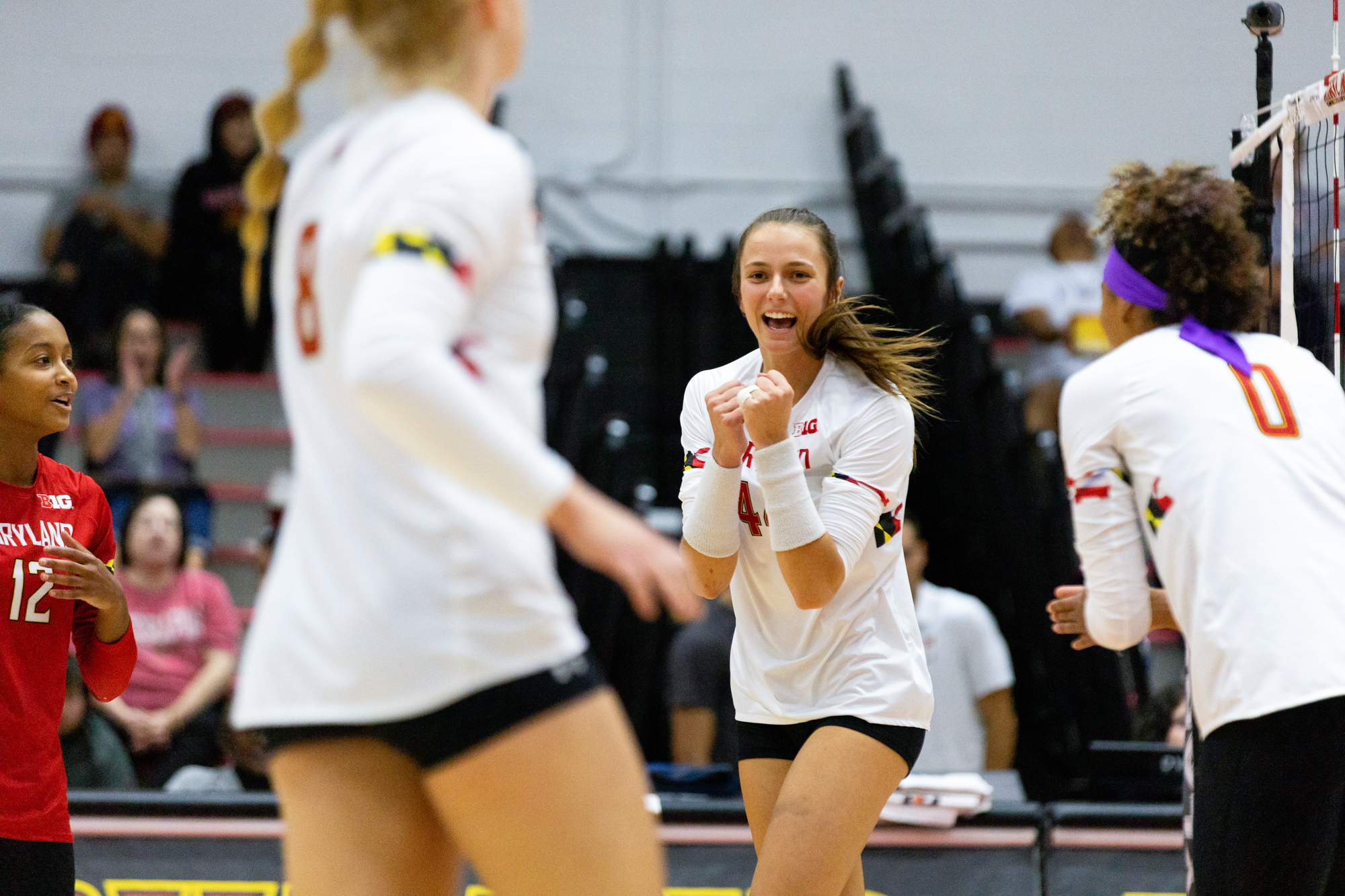 Maryland volleyball coach Adam Hughes has challenged Sam Csire throughout the season to step up and seize her role as the Terps’ leader on the attack.

The junior outside hitter’s shouldered arguably the heaviest burden among anyone on Hughes’ squad. Csire leads Maryland with 225 kills, is third on the team with 129 digs and is fifth on the team with 44 blocks, all while being one of just four players to appear in all 68 of the Terps’ sets this season.

Csire has shown flashes of brilliance in her demanding role, including a six-game stretch with at least 11 kills, but has experienced growing pains throughout her maturation into the team’s dependable leader.

“I’m hard on [Csire] right now because she’s kind of our go-to player, and I think it’s a tough position for her to be in because she’s been a consistent player for us for the last two years,” Hughes said after Maryland’s loss to Michigan State Sept. 30. “I think she’s now realizing as she moves to an upperclassman, this is her role to kind of lead us.”

Csire has particularly struggled to avoid attack errors at times, something Hughes has stressed is crucial for her to remedy to become the player she wants to be.

In front of a sold-out home crowd on Oct. 2, Csire spewed a career-high 18 attack errors and finished with a negative hitting percentage for just the fourth time in her career as the Terps fell to then-No. 3 Nebraska.

But Csire didn’t wallow in her disappointing performance.

“After the match, she sent me a nice note saying, ‘I’m gonna step up and I’m gonna be what I can be,’” Hughes said before Maryland’s practice Oct. 5. “That’s thrilling for me. … She knows that she’s gonna have to take another step. … She’s not complacent in what she’s been able to achieve.”

In the Terps’ last two contests, Csire minimized her attack errors and remained the team’s go-to scorer from the outside.

On Oct. 7 against Illinois, she misfired on just two attacks and led Maryland with nine kills — including the 700th of her career.

Csire continued her efficient play in the Terps’ next match against Rutgers on Oct. 9. She finished with 12 kills against just three errors as Maryland bounced back to sweep the Scarlet Knights for its first conference win of the season.

“The best part about it is that I saw it all week in practice,” Hughes said of Csire’s clean play. “She put a point of emphasis on it. And again, I don’t think it was lack of her wanting to do it in the past, I think her big thing is realizing that she can do more and that she’s ready to take the next step.”

As Csire’s offense has improved, so has the team’s. Maryland hit .290 in its win against Rutgers — its best hitting percentage against a Big Ten foe since October 2021 — and finished with fewer than 15 attack errors for the first time in its last seven matches.

Though Csire’s sharper play may symbolize a step up in her growth on the court, her leadership in the huddle has never depended on her on-court performance.

“Having her confident and her vocalizing things that are happening, obviously it helps the other people who come off the bench … on what we need to [do] support-wise, juice-wise, things like that,” senior defensive specialist Lexy Finnerty said. “I think just her being able to talk to everyone even when she’s struggling is really crucial.”

Moving forward, Csire will be leaned on even more to thrust Maryland back into contention among a pack of Big Ten stalwarts, as Maryland currently sits at 1-5 in the conference with 14 matches remaining.

“Honestly, it feels like her freshman year all over again,” Hughes said. “We’ve kind of reframed what her role is and what her responsibility is. And, I’m sure she’s feeling a little bit of that pressure. … She’s kind of the glue that’s trying to keep us together.”