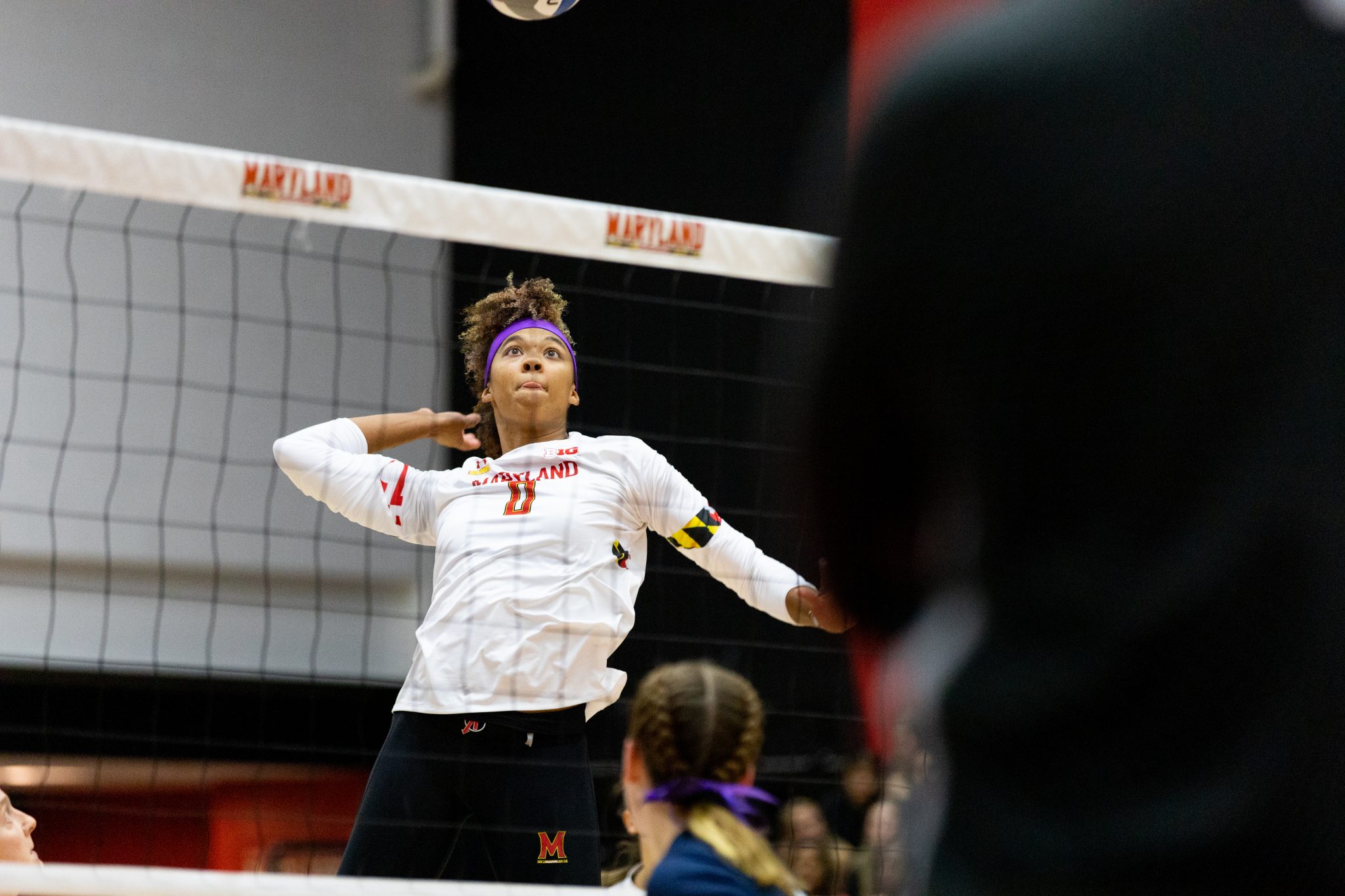 Just one block away from Maryland volleyball history, middle blocker Rainelle Jones flashed from left to right, leapt in the air alongside setter Sydney Dowler and met a crushing Brooke Mosher spike at its summit.

The ball hit off of Jones’ hands, pinballed through a sea of Fighting Illini and landed back on Illinois’ side, cementing Jones’ status as Maryland’s all-time leading blocker.

Jones’ second block of the night was her 650th of her career, vaulting her past Rachel Wagener’s previous program record of 649 career stuffs. Her feat was the highlight of an otherwise forgettable night for Maryland as the Terps fell 3-0 to Illinois and dropped to 0-5 in Big Ten play.

The Fighting Illini improved to 14-0 all-time as the Terps, who were swept for the first time all year.

“I know that [coach Adam Hughes] doesn’t, I guess, focus on moral victories, but I think that he does appreciate when we do make big milestones like that,” Jones said.

Jones wasted little time tying the program record, linking with Sam Csire to deny a Kennedy Collins spike and give Maryland a 6-5 lead in the first set.

But the Fighting Illini quickly began to find their way around Jones and the rest of the Terps’ block, scattering 13 kills across the floor to log a .312 hitting percentage in the opening set.

Illinois had particular success gashing the middle of Maryland’s defense, using four kills from Kayla Burbage in the first set to sustain control while Maryland’s offense sputtered to a lowly eight kills in the frame.

Jones’ record-breaking block was a mere hiccup for the Fighting Illini, who claimed the ensuing point and rolled to a 25-15 opening set victory.

“I thought we did okay from the endline to get enough pressure to force [Illinois] to play a little bit higher,” Hughes said. “But realistically, we were not able to get it done defensively.”

Jones continued to roll in the second set, charting three more blocks and a pair of putaways to keep Maryland battling until the very end of the frame. She finished the game with six blocks and set the program’s new record at 654.

Illinois scrapped its way to a 20-16 second-set lead behind a furious nine-kill effort from Raina Terry, who finished with a match-high 18 putaways.

Burbage and Mosher each added 10 kills to help Illinois to a .264 hitting percentage, the second-highest Maryland has allowed in a match this season. The Terps, meanwhile, had their least productive offensive match of the season, finishing with a season-low 29 kills.

A Terry service error gave a dormant Maryland offense a much-needed boost, as her misfire from the endline sparked a 4-0 Maryland run that evened the frame at 20.

Both sides tussled throughout the next five points, and Maryland found itself with a chance to tie the set once again after Sydney Dowler’s first ace of the night shaved the deficit to one.

However, Dowler misfired on her ensuing serve to give the Fighting Illini set point, which Laila Ivey gave up with another costly error as Illinois escaped with a 25-22 win in set two.

Like she did in the third set in the Terps’ last match, however, Ivey was her sharpest in the third frame. The freshman pierced Illinois’ defense with four kills to help Hughes’ squad maintain a slim lead for most of the third set.

But the Terps could do nothing to fend off Terry, who parried Ivey’s shining stanza with six more kills to help the Fighting Illini wrestle control of the frame from Maryland’s grasp.

With the Terps leading 18-17, Illinois found three crucial points from Sarah Bingham to jump ahead 20-18 and rode its momentum to the finish.

Jones’ fifth kill of the night gave Maryland a pulse, but Mosher’s 10th putaway of the match slammed the door on the Terps and sent them to their fifth-straight loss.