Maryland volleyball’s late-season skid continues with 3-0 loss to No. 3 Wisconsin 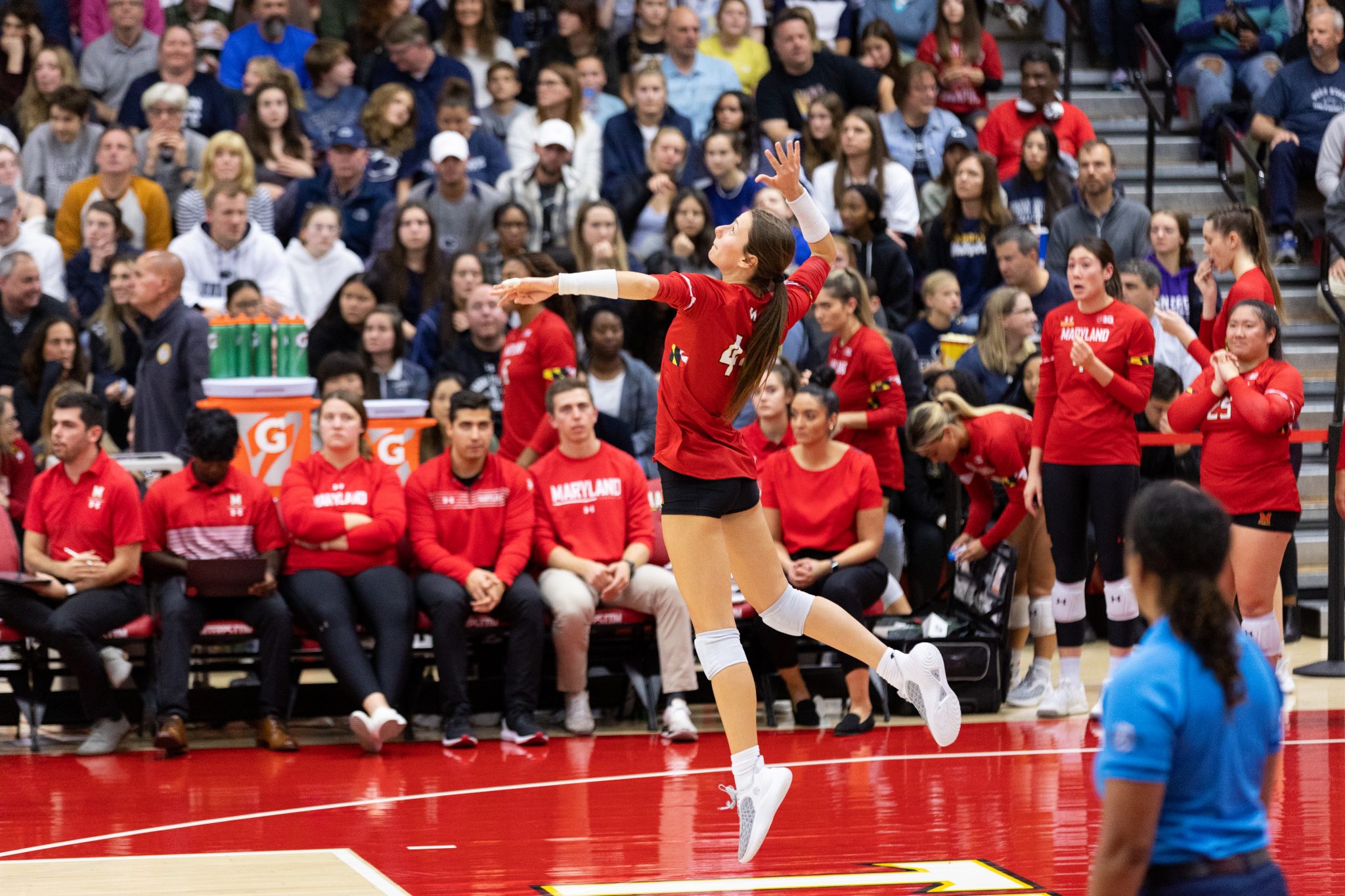 Just after she muscled her eighth kill of the match past the arms of Rainelle Jones and Gem Grimshaw, Wisconsin’s Danielle Hart spun around to greet her fired-up teammates as an awakened UW Field House crowd showered its home team in applause.

The echo of clapping hands swelled into a spirited roar once a whistle came from Maryland volleyball’s bench, spelling a timeout from a Terps team struggling to keep pace with the country’s third-ranked squad.

Maryland battled valiantly against the Badgers, but Wisconsin’s crisp offensive clinic proved too much to overcome for the short-handed Terps, who fell 3-0 to the defending national champions in Madison.

“I thought we had some windows in the first [set] and maybe a little bit in the second [set] as well,” coach Adam Hughes said. “But [on] senior night [against] a top team at home … tough place to pick up a ‘W.’”

Without offensive centerpiece Sydney Dowler, who fell ill just hours before the match, coach Adam Hughes reached deep into his bench for relief. Erin Engel and Zoe Huang answered the call, as they split time at setter and both notched career-highs with 18 and 17 assists, respectively.

With outside hitter Laila Ivey sidelined as well, Laila Ricks returned for the first time in two weeks and shared swings with Grimshaw to form a complementary duo that finished the night with 12 combined kills.

Even without its customary squad on the court, Maryland manufactured a stirring first set and gave the Badgers all they could handle on their home court.

“The group continues to battle together no matter who’s on the floor,” Hughes said. “And that matters a lot to me in terms of our culture and how we pursue what we’re trying to achieve.”

Putaways were plentiful early and often for the Terps, who used 17 kills from six different scorers and went toe-to-toe with Wisconsin in a first set that featured six ties and three lead changes.

Sarah Franklin ripped three kills past Maryland’s front wall as Wisconsin shuffled to a 7-2 lead, but the Terps remained afloat riding a wave of putaways by Sam Csire, who shook off her shaky offensive outing against Minnesota with a team-high 12 kills on the night.

“I know Sam Csire had a little bit of a rough night last night, but we had a good chat about it,” Hughes said. “Good players don’t let one thing rattle them. I thought she did a great job.”

Led by Csire’s six first-frame spikes, Maryland lasered attacks past Wisconsin from all angles. Grimshaw, Jones and Erin Morrissey each charted a trio of terminations in the first frame, with Morrissey’s third kill giving the Terps a 21-20 lead.

Their advantage dissipated soon after, as Franklin’s seventh kill of the stanza spurred a 3-0 stretch as the Badgers wriggled their way to a 25-22 first-set triumph.

But the first scoring spree of the night went to the Badgers, who got a quartet of finishes from Julia Orzol in a run of six straight points that inflated Wisconsin’s lead to 15-7.

And neither Russ nor Morrissey could keep up with a rampant Wisconsin attack that repeatedly gashed the nation’s best blocking team with a 19-kill bombardment at a scorching .545 clip in the second set for a 25-15 win.

“They have arms everywhere,” Hughes said of the Badgers’ potent attack. “They can hold your attention inside, and then they can beat you from left and right.”

Now in a two-set hole, Maryland hung around with Wisconsin in the third stanza behind four more kills from Grimshaw and three apiece from Csire and Russ as the Terps closed to within 21-17.

But Hart parried and sprayed five of her ten kills past a weary Maryland defense, and the Badgers’ grip on the lead remained firm until Orzol’s tenth spike put a lid on the Terps’ second consecutive straight-set defeat.