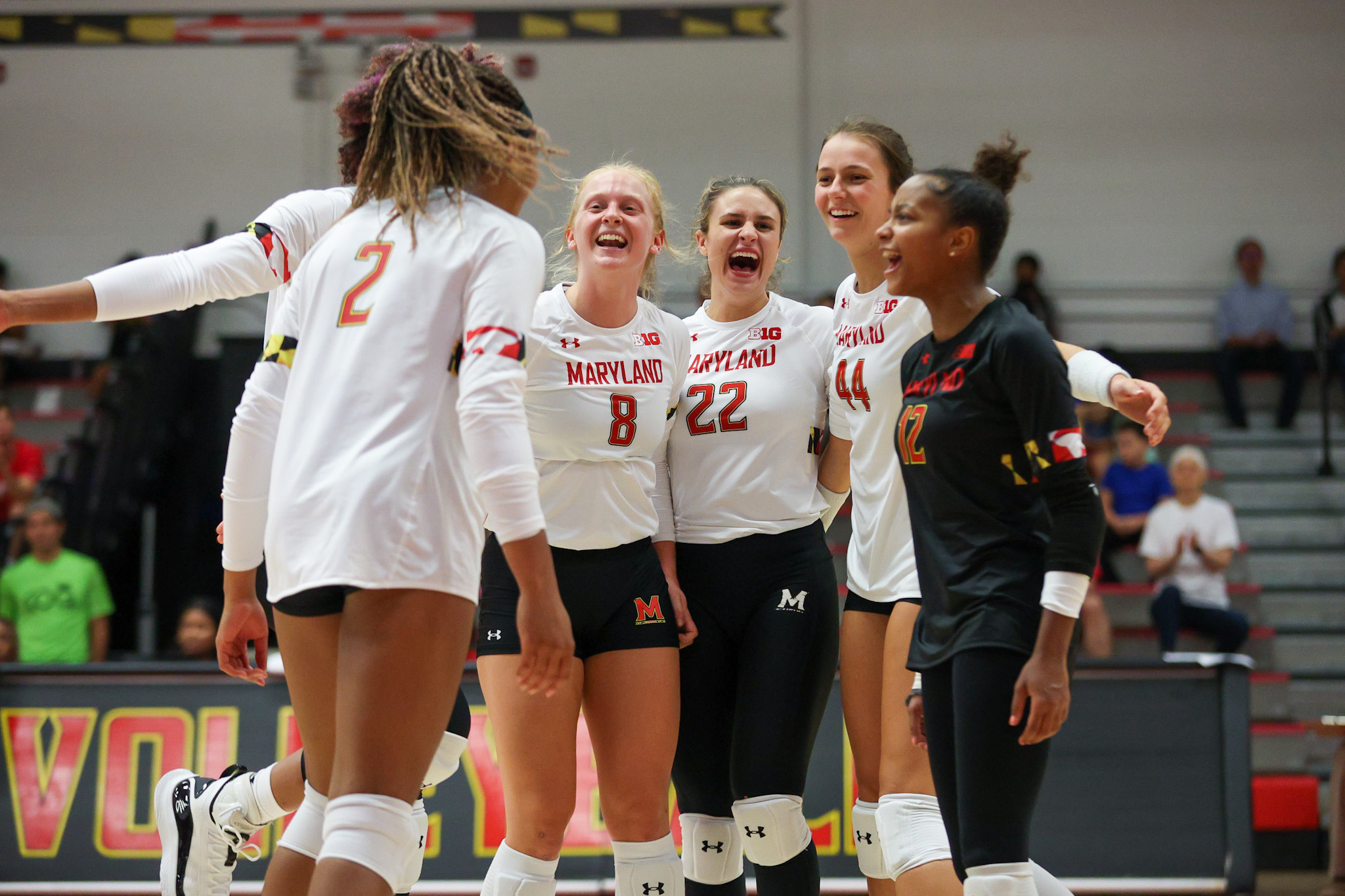 Maryland volleyball huddles during its 3-0 win over Navy on Aug 26, 2022. (Cam Andrews/The Diamondback)

Rainelle Jones has proven herself time and time again as an all-time great on the defensive front throughout her five-year career at Maryland.

She left one final reminder on Friday.

Playing in her last game in a Maryland uniform, the program’s all-time block leader took to the air one last time and sent Candela Alonso-Corcelles’ spike back to the floor, bringing an emphatic end to Maryland’s first five-set triumph of the season.

Jones’ 11th block of the day polished off Maryland volleyball’s comeback over Indiana as the Terps rallied to win the final two sets after falling behind 2-1 to cap off their 2022 campaign with a gritty 3-2 win.

“To have our backs against the wall, [we] could have easily just kind of laid over and surrendered,” coach Adam Hughes said. “They’ll never do that, and to find a way to come back … It’s a pretty good way to finish the season.”

When Maryland took the court for the decisive fifth set, history was not on its side.

The Terps entered Friday’s season finale 0-4 in five-set decisions this season, including a 3-2 loss to the Hoosiers in College Park exactly two months ago.

But feeding off the momentum of its decisive fourth-set win, Maryland came out firing in the final frame.

The Terps raced ahead 4-0 in the fifth set behind back-t0-back block assists by the duo of Jones and Laila Ricks, forcing Indiana coach Steve Aird to call a timeout.

The former Maryland head coach summoned his team to the huddle once again following another block from Erin Morrissey that doubled the Terps’ advantage to 10-5, but he could only watch as his team spewed three more attack errors down the stretch to seal Maryland’s victory.

“The last point was probably the biggest,” Jones said. “We knew at that point that we were probably gonna win the set and the match.”

Despite being out-killed by 18, the Terps used 16 blocks and capitalized on miscues from an ultra-aggressive Indiana serving platoon to escape Bloomington with their 16th win of the season.

Three of the Hoosiers’ 17 service errors came in the fatal frame, with Morgan Geddes’ misfire setting up Jones’ clincher on the subsequent point.

Maryland needed just three kills to win the fifth frame and hit just .117 on the day, its lowest hitting percentage in a win this season. Jones and Sam Csire led the Terps with 10 putaways apiece, with the latter picking up her 400th kill of the season late in the fourth set.

Geddes and Alonso-Corcelles each paced the Hoosiers with 13 kills, while Mady Saris rained 12 on the Terps.

Jones came out swinging in her final career match, connecting for kills on her first three swings.

Neither squad garnered more than a two-point lead until Jones put Maryland ahead 19-16 with a stifling rejection against Alonso-Corcelles at the net. Jones finished the first frame with a team-leading five kills on an uber-efficient six swings as the Terps seized an early advantage with a 25-21 win.

Alonso-Corcelles came alive in the second frame, crushing five kills past the Terps and dumping an ace that capped a run of seven-straight home scores to push Maryland to set point.

Jones stopped the bleeding momentarily with her fourth block, but Savannah Kjolhede catapulted a cross-court finish on the subsequent point that emphatically sealed a 15-kill second set by the Hoosiers, who hit a scorching .700 and cruised to a 25-10 decision that evened the match at a set apiece.

“I just thought they got really hot,” Hughes said. “We missed one or two plays early … we kind of bled out there a little bit.”

An active Maryland defense reached, lunged and dove for 20 digs to cool Indiana’s collective hot hand in the next set, limiting the Hoosiers to a .136 clip throughout a pivotal third stanza.

Milan Gomillion had arguably the most thrilling dig in the set, racing to recover a sloppy serve receive with a sliding one-armed bump while crashing into the wall in front of her fired-up teammates. Laila Ivey finished that rally with a kill that pulled Maryland to within 11-9.

But in a set decided by five points, kills were the ultimate factor. The Hoosiers’ 14 kills outclassed the Terps’ nine as Indiana crept within a set of a season-finale victory, 25-20.

Maryland’s offense continued to tread along in the fourth frame, but a concoction of timely Csire kills and Jones blocks gave the Terps just enough space to wriggle out of a tight set with a 25-20 victory, sending the Big Ten squads in a decisive fifth set for the second time this season.

“We did have a lot of [five-set matches] under our belt that we didn’t win,” Jones said. “So this was really good momentum that we had in the fourth set to take on to the fifth.”

And when Jones’ final block in Maryland uniform cascaded to the ground in the fifth, the Terps came off the floor victorious for the final time in their 2022 campaign.