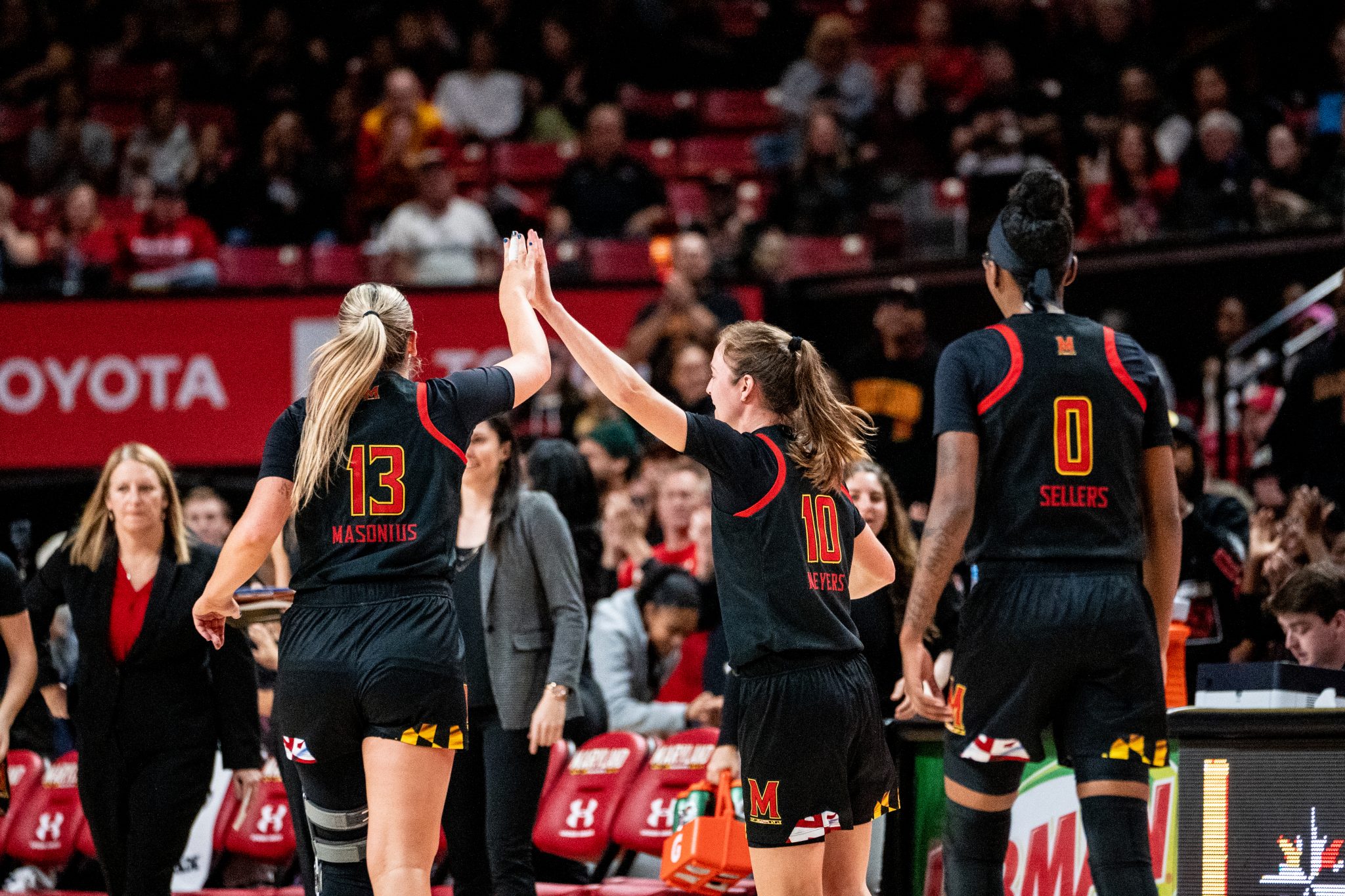 The Xfinity Center fans started cheering early, erupting into cheers as Shyanne Sellers’ shot from behind the arc fell into the basket to give Maryland women’s basketball a one-point lead in the first half.

They were back on their feet less than thirty seconds later after a three-pointer from Abby Meyers extended the lead to four.

Their cheers crescendoed in the final minutes when the Huskies made the mistake of leaving Diamond Miller open behind the arc. She made her lone three-pointer of the game at a great time, landing a dagger that gave her team a seven-point lead with just 34 seconds left on the clock.

Her basket got the fans on their feet, where many remained throughout the final seconds. When the final buzzer sounded, spectators and players alike celebrated No. 20 Maryland’s 85-78 win over No. 6 UConn — the Terps’ first win over the Huskies in program history.

Elisa Pinzan rushed onto the court, leaping up in the air to chest bump Meyers as the 12,566 fans listed on the announced attendance exploded in glee.

“What I loved the most obviously was the electric atmosphere we had in the building,” coach Brenda Frese said. “It was the energy that we needed to … have.”

The crowd had the players’ backs, Sellers said. After fans disagreed with a foul call in the fourth quarter and started booing, the sophomore guard lifted her arms in the air and encouraged them to get louder.

The announced attendance marked the highest for the Terps since they sold out a 2016 against then-No. 1 UConn. That contest ended 87-81 in favor of the Huskies, one of Maryland’s seven losses in the pair’s seven matchups.

The Terps returned to Xfinity Center coming off of coach Brenda Frese’s 600th career win Thursday at Purdue, poised to capture their third win against a ranked team this season and secure another milestone victory.

“Definitely will remember win 601 because of this group,” Frese said.

Brinae Alexander is the only Maryland player who’s ever played UConn, doing so while playing for Vanderbilt. She scored 13 points and said she’s “honored” to play at Maryland.

But for the rest of the Terps, Sunday marked a fun first matchup.

“I just think it’s really cool because this is my first time playing against UConn, so I’m 1-0,” Diamond Miller said.

“Me too,” Sellers added.

Maryland did face a shorthanded UConn squad, one that played without Paige Bueckers, Azzi Fudd and three other players.

But that didn’t diminish the win for players like Meyers and Alexander. They came to play at Maryland to compete against big-time programs like UConn, Notre Dame and Baylor — all teams the Terps have beaten this year.

Alexander said it felt great to “battle” with UConn while Meyers noted she barely got the chance to face top teams at Princeton because it usually only played one Power Five team each season.

“It’s something I’ll definitely be able to talk about 20, 30 years to come,” Meyers said before Alexander joined her at the end, the pair’s voices rising in glee.

“I beat UConn and Geno,” the two veterans said in unison before laughing together.