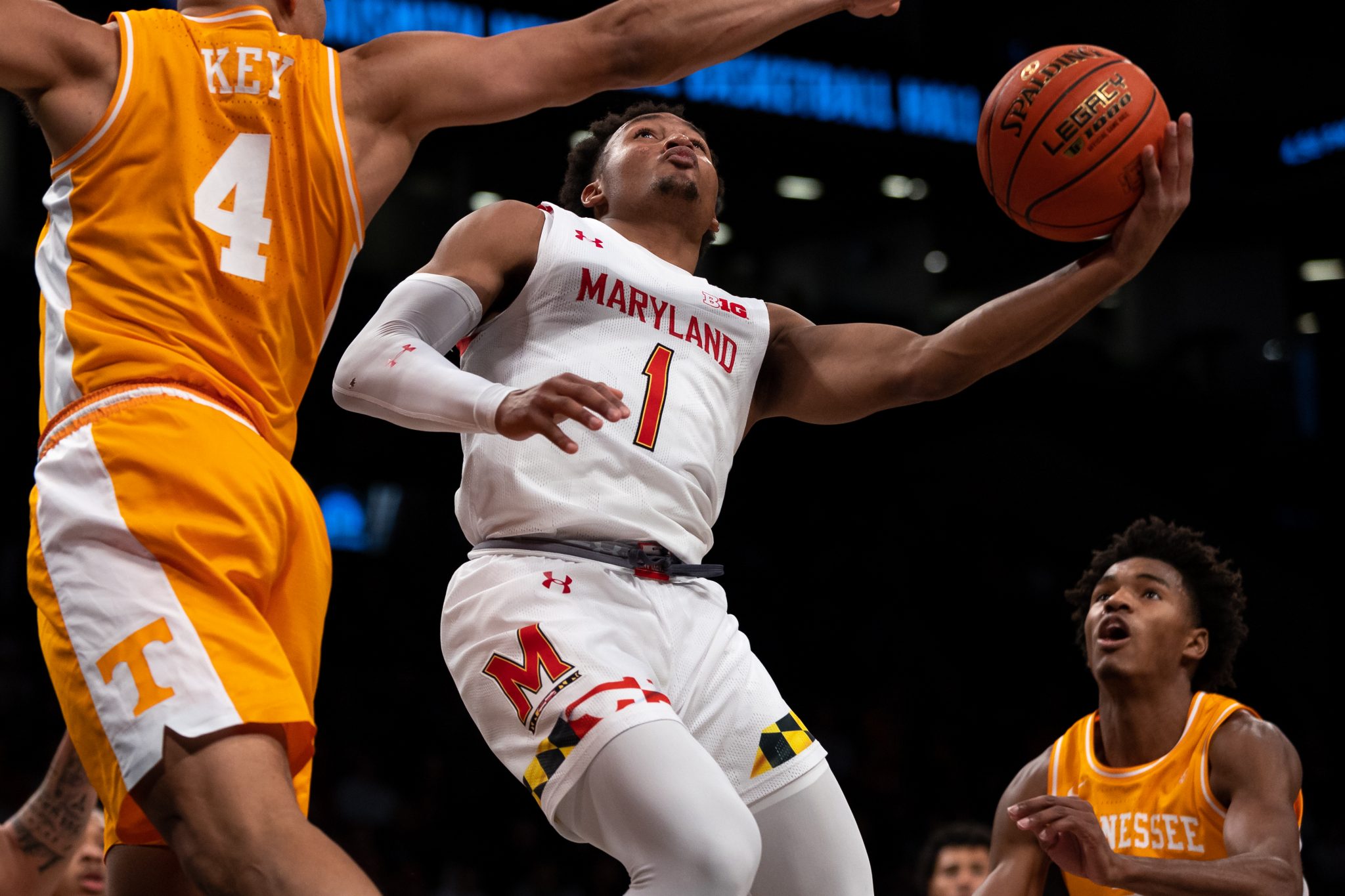 BROOKLYN, N.Y. — A large contingent of Maryland men’s basketball fans at Barclays Center roared as Donta Scott dropped a floater through the net, extending the Terps’ run to 12 points in a row in the latter stages of the second half.

Maryland’s momentum culminated in two chances for Jahmir Young to tie the game with under 11 seconds to go. His first jumper bounced helplessly off the rim with the Terps down two and he couldn’t connect on a buzzer-beating three-pointer that would have sent the game to overtime.

No. 13 Maryland roared back from a 21-point first-half deficit, but fell just short as the Terps dropped their second consecutive game to No. 7 Tennessee Sunday, 56-53, in the first meeting between the two schools since 1984.

An awful shooting start replicated Maryland’s Tuesday loss to Wisconsin, as the Terps began the game 0-for-5 from three.

Just over 66 percent of Maryland’s shots in the first half came from behind the arc, but the Terps made just 12.5 percent of those in the opening 20 minutes and finished the game 2-for-24 from three — their worst shooting performance from distance since Mark Turgeon’s final game as head coach against Virginia Tech on Dec. 1, 2021.

Hakim Hart broke Maryland’s drought from three just under seven minutes into the game, but his make was one of just three field goals the Terps notched in the entire first half.

Maryland finished the frame 3-for-26 from the field as a majority of its first-half points — nine of 17 total — came from the free throw line.

The Terps held the Volunteers to just 28.2 percent shooting and 0.971 points per possession in the opening 20 minutes, although Tennessee’s 13 offensive rebounds in the first half allowed it to convert on second chance opportunities.

The Volunteers finished with 21 boards on the offensive end, the most Maryland’s given up since its first round NCAA tournament matchup with UConn on March 30, 2021.

“We just kind of let them push us around too much,” coach Kevin Willard said. “Especially early in the game, we kind of just let them set the tone a little bit.”

Despite relative defensive success, the Terps’ horrid offensive efficiency meant it entered the break down, 34-17, its largest deficit at halftime so far this year.

Willard’s squad held the Volunteers without a point for almost four minutes to open the second half in an effort to close Tennessee’s massive advantage. Maryland improved its shooting as it began to chip away in the latter frame and finished 14-for-28 from the field in the second half.

The Terps found success on the inside to kick start its run with Julian Reese and Scott combining for eight second half two-point buckets. The pair found themselves in foul trouble early in the game, but the Volunteers’ bigs were also called for infractions multiple times as Julian Phillips, Olivier Nkamhoua and Uros Plavsic all picked up four fouls.

“We knew we had to try something else, we weren’t making the shots we were normally making,” Scott said. “We had to try and make the best of our situation because we know a lot of our players can pass the ball and we can get some ball movement, get in the paint and cause some trouble.”

Young consistently attacked the basket as Maryland surged back to within two points of Tennessee with just over three minutes remaining despite still failing to get shots to fall from behind the arc, as the guard went 1-for-7 from three on the game.

The Charlotte transfer finished with 18 points, seven assists and four rebounds, but a trio of three-pointers in the final six minutes from the Volunteers helped Tennessee maintain a lead it never surrendered.

Two missed threes on the same possession saw the Terps come up empty with one of their last touches of the ball with just over a minute remaining. But on its next offensive set, multiple Maryland players sprawled to collect an offensive rebound that resulted in a Hart layup that cut Tennessee’s lead to two.

Missed free throws from the Volunteers gave Young multiple chances to tie the game, but he couldn’t recreate his clutch shot that secured the Terps’ win over Illinois just over a week ago as Maryland’s early offensive struggles left it just short of a marquee win in Brooklyn.

“It’s really just trying to get a good shot for our team to win,” Young said. “Unfortunately they didn’t fall, but I really wasn’t thinking about the last one [against Illinois], you know, I was just trying to win the game.”