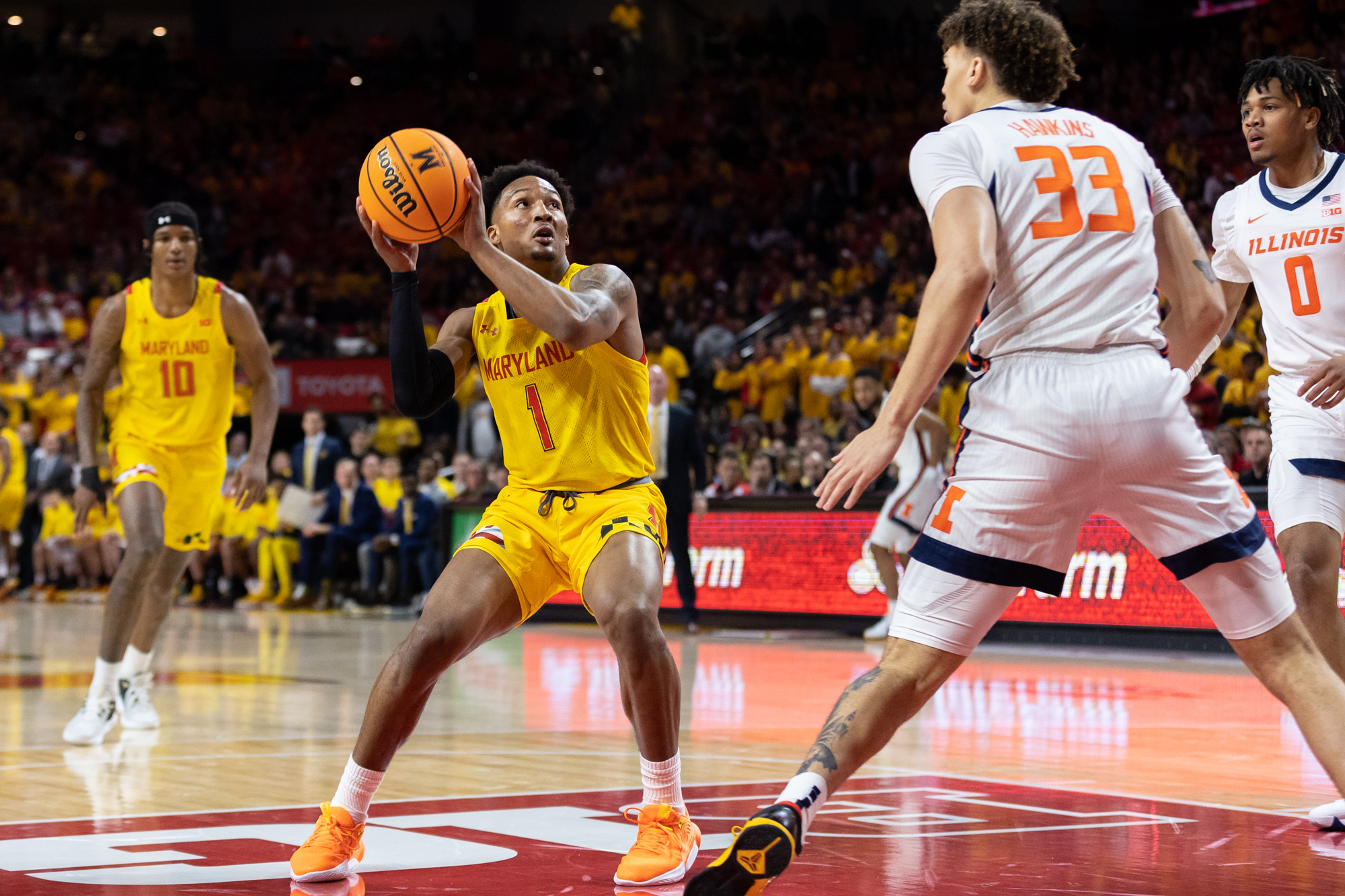 From start to finish on Tuesday night against Wisconsin, Maryland men’s basketball played uncharacteristically. The Terps fouled and missed open shots at their highest rate this season while giving up their second-most turnovers in a game this year.

The Badgers took advantage of the coach Kevin Willard’s squad’s sloppy play and grinded their way to an early lead. Wisconsin never looked back, handing No. 13 Maryland its first loss of the season, 64-59.

Willard lauded the Badgers’ physicality on defense after a game that saw 38 total personal fouls.

“You [have] to give them credit,” Willard said. “We talked a lot about their physicality on defense, especially at home. Everybody gets away with murder at home.”

The Terps ran into swift shooting struggles on Wisconsin’s home court, and it showed as the Badgers built a 21-11 lead halfway through the first half.

Maryland’s early failings from three — starting 1-for-8 from deep — dropped it into adversity as the Badgers’ offense churned in the paint. Wisconsin spread the ball well with the team posting nine assists in the first half.

“They work so well out of the post,” Willard said. “I think that’s what the biggest challenge is [defending them].”

But what initially doomed the Terps revitalized them near the end of the first half. Donta Scott helped power Maryland to a 11-0 run with just over five minutes left in the opening half as he landed the Terps’ second three-pointer of the day before Hakim Hart and Jahari Long added their own.

[Maryland men’s basketball jumps up to No. 13 in AP poll]

Those three straight made threes cut Wisconsin’s lead down to one, and a smooth stepback three off a crossover from Don Carey helped them keep pace as the half came to a close.

Still, Maryland trailed 31-29, the first time the Terps have trailed at halftime all season. Despite the late run, Kevin Willard’s squad only managed to shoot 43 percent from the field and 38 percent from three.

If Maryland’s poor shooting start wasn’t peculiar itself, a dunk from Wisconsin’s mascot broke a rim during the halftime show — causing a delay for both teams to resume play. That would be the same rim the Terps would shoot on for the second-half.

Omens aside, neither team inspired any confidence in their respective offense through the midway point in the second-half. Maryland’s inefficiency shooting turned into turnover problems, and Wisconsin generated a fair chunk of its offense from the charity stripe alone despite its inefficient shooting from the field.

Wisconsin’s ability to get to the line proved to be the difference. The Badgers shot 17-of-27 to the Terps’ 7-of-12.

In a first this season for the Terps, it became quickly apparent they’d have to triumph in a low-scoring battle against the Badgers. The game turned into a foul extravaganza, and both teams racked up 29 fouls in the second-half as the stakes heated up.

“[Wisconsin’s physicality] was definitely a challenge, [I] had to feel my way into that early on,” Jahmir Young said. “…It was a little stagnant on the offensive end.”

Young led the team with 17 points on 6-of-13 from the field. He accumulated the least fouls of the Terps’ starters as Don Carey fouled out and Julian Reese came close with four.

“They were just walling us up,” Young said. “They weren’t going to let us get easy baskets in the lane.”

And Maryland, reeling from a stifling Wisconsin defense that did just enough for its offense, failed to have an answer. The Badgers built a double-digit lead with under four minutes left, and the Terps stared down their first loss of the season.

The final four minutes saw some flickers of life from a Terps offense that hadn’t hit any shots from the field for several minutes in the second-half. It came from distance again, as Jahmir Young landed one from the arc and Scott swung the ball out to Carey for another.

Both teams exchanged a pair of foul shots to set up Maryland with a chance to close the distance as the Terps faced a five-point deficit with just under a minute to go.

Young followed up his clutch three late against Illinois with another important three late to cut Wisconsin’s lead to four, but it wasn’t enough as the Terps fell to the Badgers on the road for their first loss of the season.

“[Wisconsin’s] excellent defensively, they play physical,” Willard said. “You have to give them a lot of credit for taking us out of our offense.”