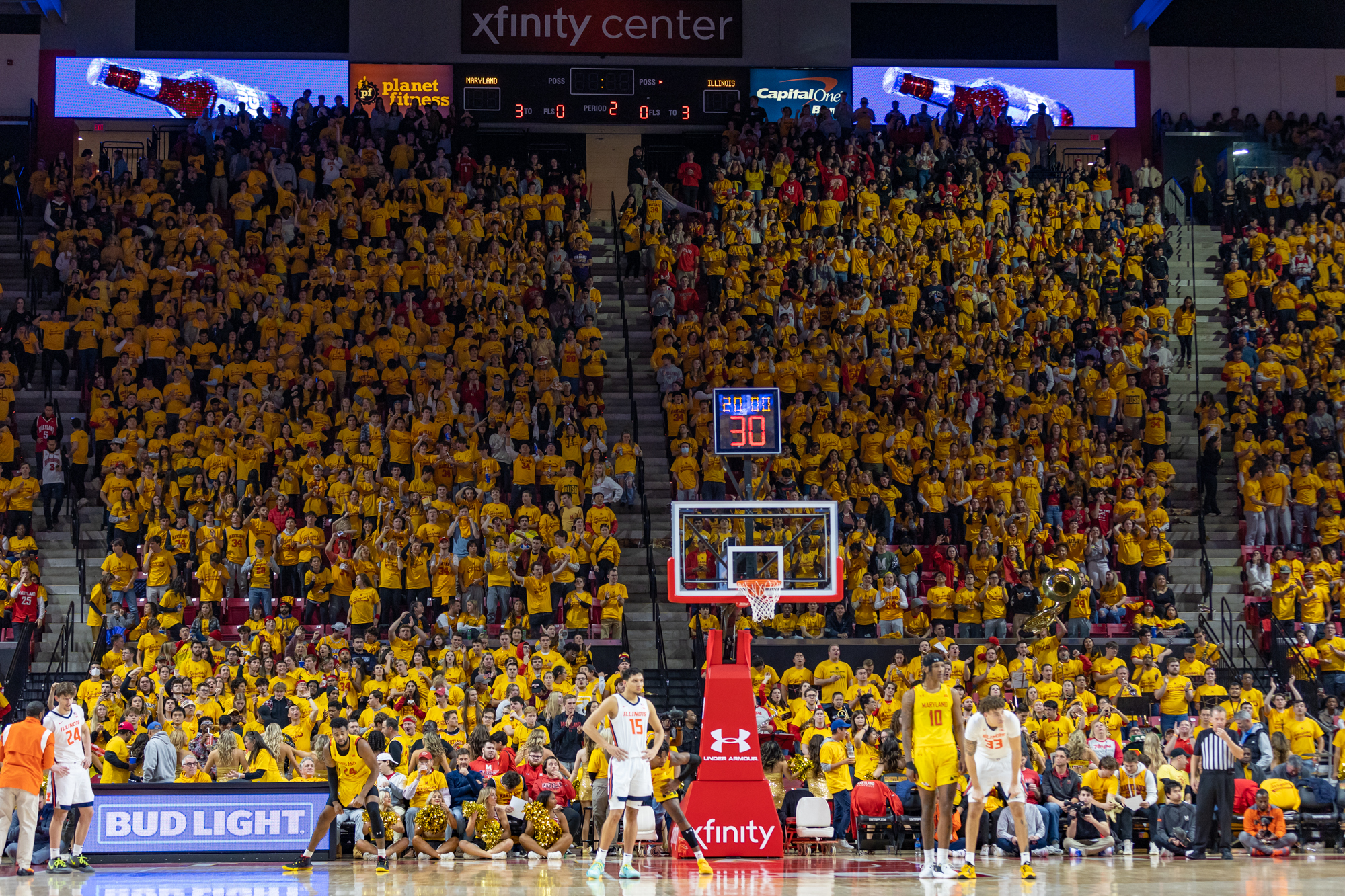 Maryland men’s basketball was a program without an identity exactly one year ago.

The Terps and former coach Mark Turgeon mutually agreed to part ways on Dec. 3, 2021, after a 5-3 start to the 2021-22 season. A year later, Maryland woke up 8-0 under new coach Kevin Willard after he notched his first ranked win as the Terps knocked off No. 16 Illinois at Xfinity Center Friday.

When the final buzzer sounded, the coach told his players to go celebrate with a raucous sold-out student section and the rest of Maryland’s 16,390 fans — the Terps’ highest listed attendance since it sold out a win over Michigan on March 8, 2020, that clinched a share of the Big Ten regular season title.

Hakim Hart high-fived fans in the stands as Maryland players reveled in the cheers of a gold-clad mob.

“It means a lot to have a crowd like that,” Hart said. “[It] just gives us a boost, especially on the defensive end.”

The win didn’t carry the same weight as the one that secured a conference championship less than three years ago. But the occasion itself was emblematic of the change the program’s been through in a relatively short span of time.

The Terps fielded successful teams in recent years under Turgeon despite not reaching the national championship summit that’s eluded them for over 20 years.

Maryland made the Sweet 16 in 2016, a 2016-17 squad started the season 20-2 — although eventually sputtered to a NCAA tournament first round exit — and the Terps’ 2019-20 team captured a conference crown before they were stripped of a chance for postseason glory by the COVID-19 pandemic.

However, the Terps’ attendance has steadily declined since 2016, apart from a small jump during the 2019-20 season.

A disgruntled fan base watched on as Turgeon departed following the poor start to the 2021-22 season and witnessed Maryland’s first losing regular season 1993 under interim coach Danny Manning.

Facing a massive inflection point in the program’s history, the Terps turned to Willard to reenergize Maryland’s support, which he began to do before one of his teams even touched the court by securing local recruits.

Still, attendance at Willard’s first appearances against inferior opponents remained low with an average of 11,775 fans through five games, including the bumper crowd against the Illini.

“It's nice to see some fans here, I mean, what the hell do the Maryland fans want,” Illinois coach Brad Underwood said after Friday’s game. “That was electric. This reminded me of the year I came in here at Oklahoma State, when you can shoot a damn shotgun in this place in the Coppin State game and not hit anybody. This is what it should be about the Big Ten.”

But ahead of the Illini matchup, the Terps handily won the games they should’ve won and were victorious in their first true tests against Saint Louis and Miami.

In that time, Willard became the first Maryland coach to start their tenure 4-0, and has since doubled that amount of wins. He also became the first Terps coach to get the program ranked in the AP poll in their first season at the helm, setting the stage for a top-25 matchup against Illinois as Maryland’s Big Ten opener.

Not only did Willard recruits like Jahmir Young — who hit a three-point dagger with 14 seconds remaining — deliver. It wasn’t just holdovers from last year who’ve blossomed like Hart, who combined with Young for all nine of the Terps’ makes from behind the arc. A flock of fans did, too.

Willard said the crowd was “off the charts” and the pair of sharpshooters praised the supporters that gave Maryland a boost over a highly-rated Illinois team, one that no player has experienced over the last two seasons.

“We was definitely feeding off of [the crowd] a lot,” Young said. “They brought the energy … I felt like we came off strong and they were a big reason for that. So we thank them for that. We need them to keep coming out.”

That energy helped Willard and the new-look Terps continue to reap the rewards of offseason acquisitions and preparation thus far as they remained one of just 15 unbeaten teams in the country.

With games against Wisconsin and No. 13 Tennessee ahead of Maryland’s next home game against a future conference foe in No. 21 UCLA, the Terps will hope to maintain their current form to create another spectacle for fans, something Willard hopes to normalize during his reign at Maryland.