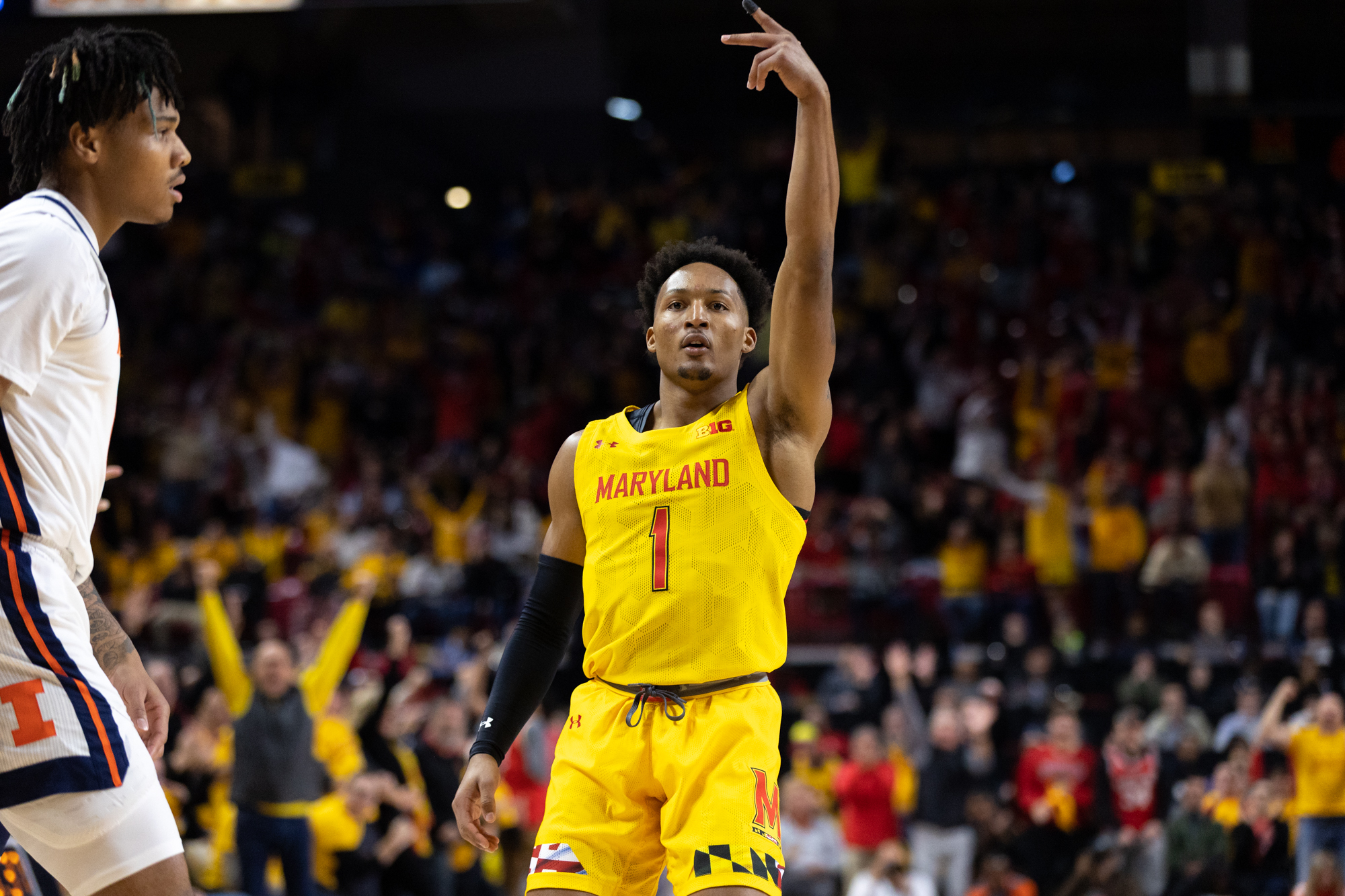 Maryland men’s basketball needed a shot to put away Illinois.

With less than 20 seconds left, Jahmir Young was patient before finding his opportunity. He created space from a Julian Reese screen before he planted and elevated over a desperate Illini defender.

The shot slowly flew true, spiraling on a high arc before it swished through the bottom of the net. Young led the Terps with 24 points on 9-of-20 shooting on the night, with his final shot sealing the game against No. 16 Illinois in No. 22 Maryland’s Big Ten opener, 71-66.

“It was an unbelievable feeling [to hit that shot],” Young said. “Terp nation fans are the best, that crowd was crazy, the noise was crazy … just being able to hit that shot was amazing, it was a dream come true.”

The Xfinity Center crowd couldn’t get enough of coach Kevin Willard’s squad, cheering the clock out as the Terps continued their undefeated season with a win in their Big Ten opener.

Booming energy in the Xfinity Center matched the competitiveness between ranked Illinois and Maryland from the opening tip. An opening three from Young set the tone for the Terps and the Illini fired back with one of their own from forward Coleman Hawkins to equalize.

Playing with equal fervor, both teams’ offenses steamed ahead until Maryland found a rhythm from range when they trailed 14-11 nearly halfway through the first period. Hakim Hart catalyzed it, netting a pair of crucial threes to capture the Terps’ first notable lead of the day.

Hart would finish with 17 points on 6-of-9 shooting from the field and 5-of-6 from behind the arc.

Energy channeled through Maryland’s home court. With tension building, Young sank the fourth three of the game to push the Terps’ lead to eight as the crowd exploded with cheers. Maryland ran with it, pushing the issue on defense against an Illinois team that only had 16 points with eight minutes left in the first half.

“I feel like they were collapsing a lot, they played a pack-line defense … we just [had to] think our teammates were gonna find us and they did, and we just made the shots,” Hart said.

After a neck-and-neck start, the Terps flustered the Illini from range and pushed their lead to as much as 12 before Hawkins hit back with another three. Illinois guard Terrence Shannon Jr. picked up the slack for the Illini as well, scoring most of his first-half production in the waning minutes.

The Illini’s late surge kept the game tense, but Young and Hart’s combined 29 first-half points that mostly came from a barrage of three-pointers — a total of seven from the pair — gave Maryland a seven-point lead at the break.

Maryland started the second-half with a 6-2 scoring run that proved the first half was no fluke and threatened the higher-ranked Illini. Shannon again kept the Illini in it, highlighted by a thunderous dunk to sink the Terps’ lead under ten with 13:47 to go in the second-half.

“If I was an NBA general manager, I’d be drafting [Shannon],” Willard said. “He can do it all.”

The Terps held Shannon to 19 points on 7-of-16 shooting and suppressed him from range with no made threes on five attempts.

Then the Illini put together a defensive run of their own, silencing the Terps’ with a 9-2 run in a roughly five minute span after Shannon’s slam. The long-range play that buoyed Maryland in the first-half fell absent, and Illinois pulled within one with 8:51 remaining.

Foul trouble didn’t assist the Terps either. Reese, a major contributor in the paint, reached four fouls shortly before the Illini pulled the game close. Willard quickly substituted the key player out for Patrick Emilien, who subsequently picked up his fourth foul.

Still, Maryland flustered Illinois enough to keep them from attaining the lead. A missed free throw from Shannon that would’ve given the Illini the lead ended with a miss and Young getting fouled, who sunk a pair to keep the Terps afloat. Hart provided long-range stimuli shortly after with the Terps’ first three-pointer of the second half.

Pressure built, and the Illini equalized again with a three from Skyy Clark to silence the court with a 62-62 tie. But the Terps would have the last word.

Propelled by Young’s last-second score to build their lead to five in the closing seconds, Illinois fell as the Terps advanced to 8-0 on the season.

“We’re trying to win a Big Ten championship. I think Illinois is as well-coached from top-to-bottom and has as good of a roster as anybody in the country,” Willard said.

“To get your first one against a team that good is really, really important.”