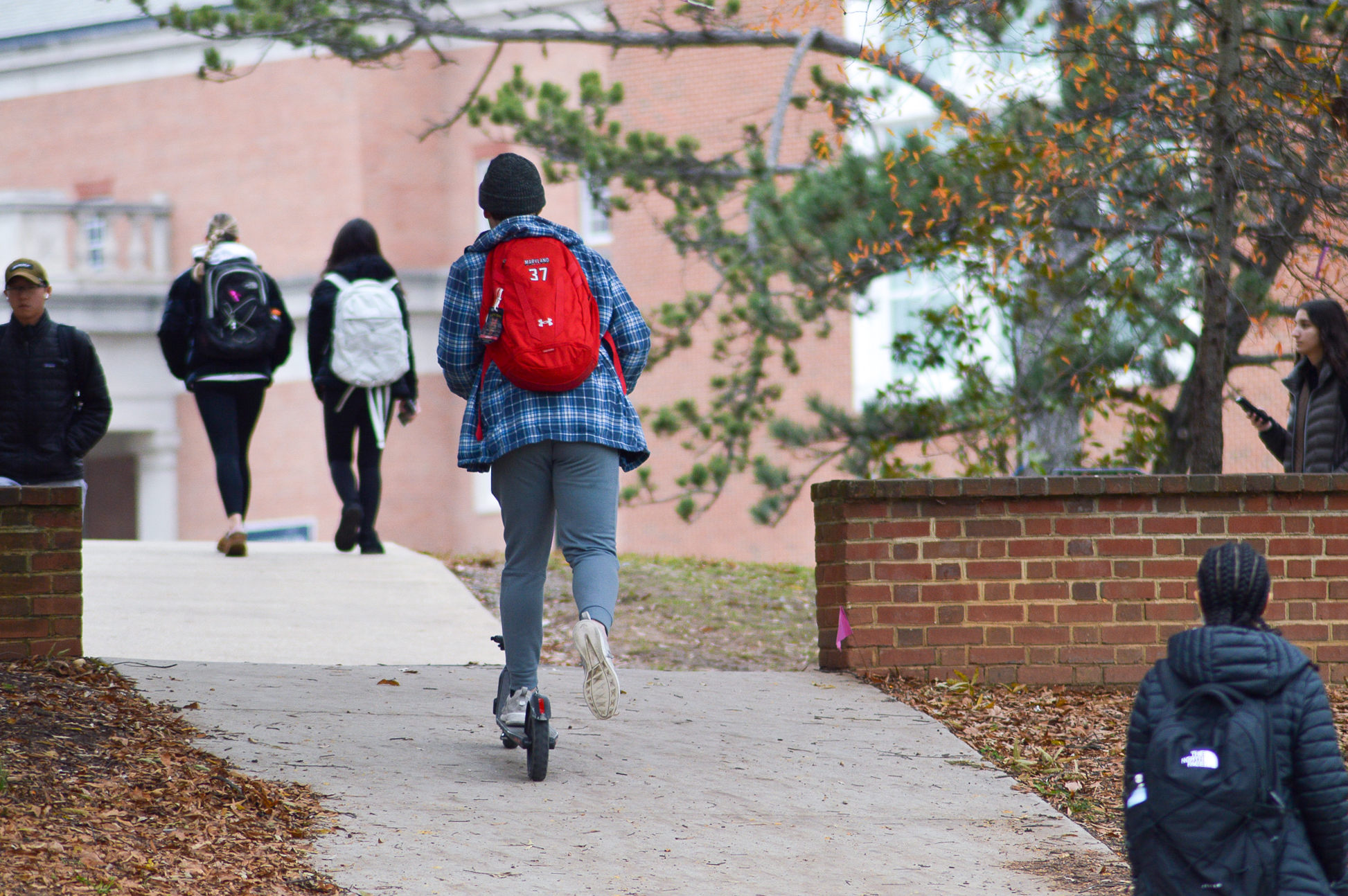 Amid ongoing safety complaints about scooters and bikes at the University of Maryland, a team of students and faculty led by university Vice President Carlo Colella is working to address concerns about micromobility vehicles on sidewalks.

Micromobility vehicles are a range of lightweight, low-speed vehicles driven by users, such as bikes, e-scooters and skateboards. This year, there has been an increase in unsafe riding practices and reports of accidents on sidewalks, according to a statement from the Department of Transportation Services.

The team, which began meeting in October and is expanding the effort to collaborate with student organizations and across departments, aims to improve campus safety with new signage outlining regulations, public safety campaigns and enforcement mechanisms. Team members come from this university’s Student Government Association, Graduate Student Government and Residence Hall Association, along with various university offices and departments.

“Something’s really changed here and we’re going to have to take this to a new level and do so with some immediacy, which is why we put together this tiger team,” Colella said.

Colella said they are approaching the issue from three angles — education, engineering and enforcement.

The tiger team is conducting public safety campaigns on regulations and safe riding practices, and working on road markings and signage that they plan to install ahead of the spring 2023 semester.

Halbfinger, a senior finance and operations management and business analytics major, said she doesn’t want the enforcement mechanisms to be too burdensome for students. Financial tickets or penalizing through the student conduct office can be harmful, she said, so her focus is on communication, such as signage that makes the regulations clear.

“It’s really important for the student voice to be heard on anything regarding repercussions and enforcement,” Halbfinger said.

Colella also said he hopes education and engineering will make the biggest difference and little enforcement will be needed. Public safety campaigns and Colella’s team’s discussions are ongoing, but students can expect to see new signage and road markings in the spring.

Because sidewalks, roadways and student behavior all belong to different jurisdictions, any enforcement will fall to DOTS, the public safety department and the student conduct office. Colella said new enforcement measures will go into place only after the education and engineering plans have been executed.

The new committee comes as improper sidewalk use has been an ongoing frustration in recent years. Colella said the team was founded after the recent rise in e-scooter popularity.

Maryland state law requires micromobility vehicles to operate on the road and follow the same traffic laws as cars. But students say it is widespread practice for e-scooters to encroach on pedestrian walkways throughout campus, often because roadways are not safe.

Timothy Pilachowski, a lecturer in the math department, has been advocating for years for bike lanes to keep micro-mobility vehicles off sidewalks. He said in the last six years, many of his students have told him they were hit by scooters or bikes while on sidewalks.

Commuter Trevor Norton walks to class from his parking spot in Lot 1. The senior government and politics major said he’s had several near-misses with e-scooters — if he doesn’t move out of the way, they’ll hit him.

“This does not need to cost that much money. You just need an enforcement mechanism,” Norton said.

The safety issues are not for lack of trying, according to DOTS. The department has conducted a series of education initiatives, such as ongoing public safety campaigns and test drive events.

But community members think enforcing sidewalk regulations is at odds with proper micromobility infrastructure, given that students riding bikes and scooters feel unsafe on roadways.

Ben Fleming, a junior computer science major, fell and dislocated his shoulder after swerving to avoid a car while riding his scooter on Route 1 near Chipotle. Fleming was riding on the street because he knew e-scooters were not allowed on sidewalks.

Elizabeth Case, a junior government and politics major, said bike riders face hostility when they have to share the road with drivers, but also don’t want to ride on sidewalks and put pedestrians in danger. Case is external president of Terps for Bike Lanes, a campus organization campaigning for safe micromobility infrastructure.

In response to infrastructure concerns, Colella’s tiger team is discussing engineering solutions, such as bike lanes, according to Halbfinger. The university is incorporating bike lanes in the Purple Line construction along Stamp Hill and Paint Branch Drive — efforts that Halbfinger said will pay off.
“Part of why things on a college campus take so long is because you want people putting in that forethought and that takes time,” Halbfinger said.