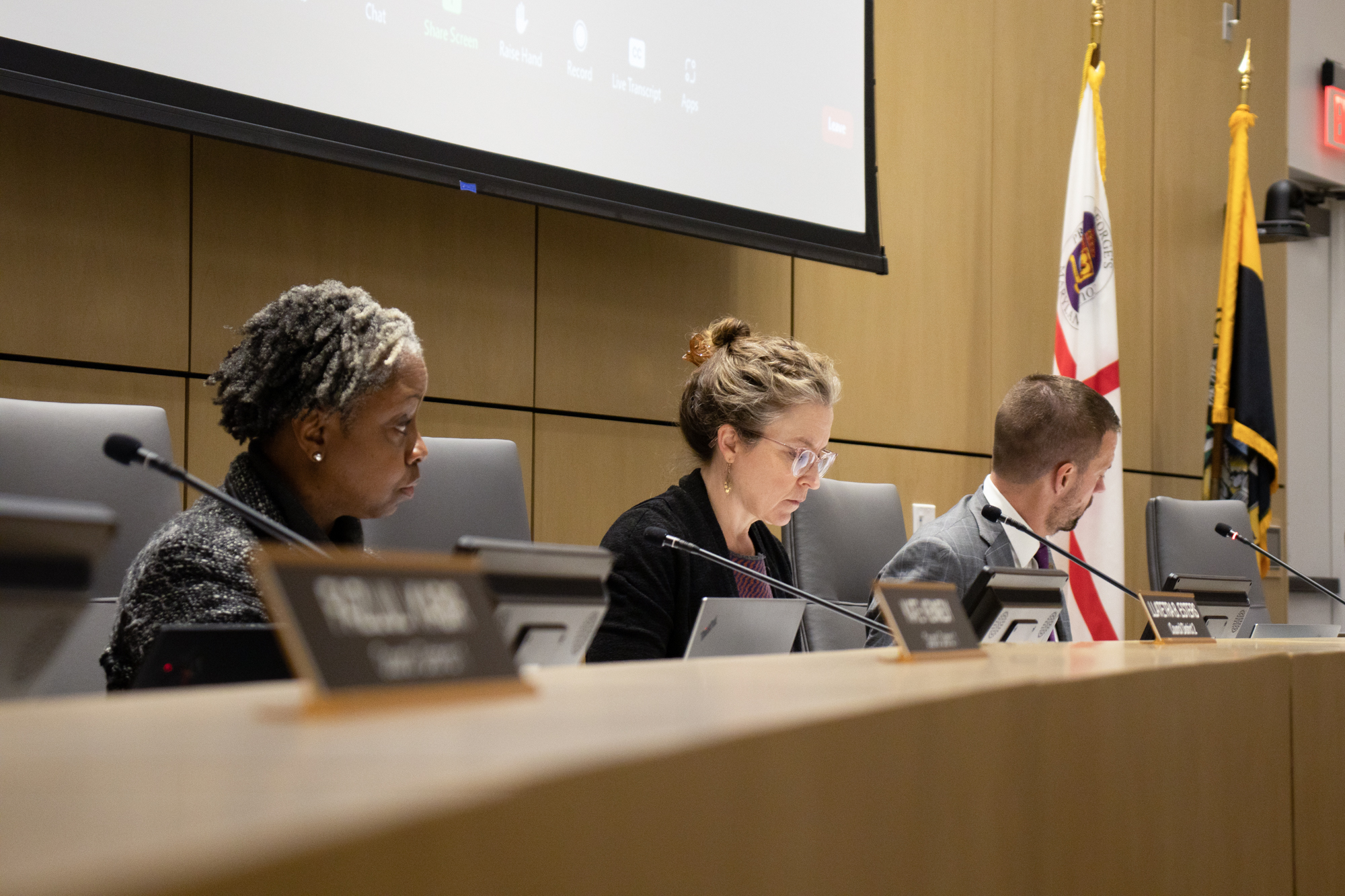 Members of the College Park City Council during a council meeting on Nov. 8, 2022. (Neelay Sachdeva/The Diamondback)

The College Park City Council voted Nov. 8 to send American Rescue Plan Act funds to College Park hotels and a new restaurant, raising questions from council members about the use of funds and council procedures.

Council members voted to give $150,000 to the Cambria Hotel College Park and $300,000 to The Hotel at the University of Maryland. The vote comes as the city expects the loss of three local hotels: The Red Roof Inn, Days Inn and Howard Johnson’s.

Grillmarx, a restaurant chain set to open in College Park soon, received funding through Lost Revenue Recovery funds — funding exempt from certain requirements of ARPA — meaning the city can use it for grants to new businesses.

City staff recommended $350,000 in funding to the new restaurant, according to the meeting’s agenda.

The city received almost $22 million in ARPA funding and moved $10 million of it into the Lost Revenue Recovery category per federal government allowances.

The bill stalled because there was not a majority for or against the funding.

“I am very disappointed right now because we have an opportunity to bring a first class business to our area, to our city,” the city’s economic development manager Michael Williams said. “I thought some of you would be more than elated to bring Grillmarx to College Park.”

The requirements listed on the city website for the ARPA Hospitality Business Grant Program, which is the program through which the city is distributing funds, say eligible businesses needed to be operating in College Park before the COVID-19 pandemic. Grillmarx hasn’t opened yet, so it was not around before the pandemic in the city.

“I wasn’t against Grillmarx getting funding, but I wanted to elevate the fact that you know, word of mouth is probably not the best way to find out that there’s an ability to get grant funding,” Adams, a District 3 council member, said.

After the original vote stalled, an amendment awarding Grillmarx about $250,000 in ARPA funds passed instead.

Adams said the council took this step to be more transparent with businesses about funding availability.

District 2 council member Llatetra Brown Esters said while she supported the amendment, the council disregarded the work city staff did to make decisions about the application process. She also noted businesses already had time to apply for this funding.

District 3 council member John Rigg, along with other council members, said the dispute over approving funding to Grillmarx went against the council’s agreement about moving the funding forward during the previous week’s work session. He said disagreements over funding should have been discussed during a work session rather than in the council meeting.

“We’re acting arbitrarily, we’re acting in contrary to what we’ve previously committed to and we’re debating with staff,” Rigg said.

Rigg’s comment opened up discussion on the purpose of city council meetings, with Adams saying council members should be open to debate during meetings, especially when factoring conversations with residents and public comment.

“You do not know what the votes are going into a meeting and I don’t think you ever should fully understand what’s going to happen,” Adams said.

“That seems to diminish any kind of comment that anybody … would make concerning an issue because it’s the night of the vote,” King said.

Mayor Patrick Wojahn said there should be an easier way for the mayor to break a tie. When votes are split in half, with four council members for a motion and four against, the mayor can cast a tie-breaking vote. However, when any council members abstain from voting, the mayor cannot break the tie — like in the case of the Grillmarx funding, where Whitney was required to abstain due to a conflict of interest.

“That really potentially gives one person the opportunity to kill an entire resolution motion by simply abstaining to it, as has happened in the past, and we almost saw again this evening,” Wojahn said.

CORRECTION: A previous version of this story misstated that Grillmarx may not receive $100,000 if the council decides to fund other businesses. This story has been updated.