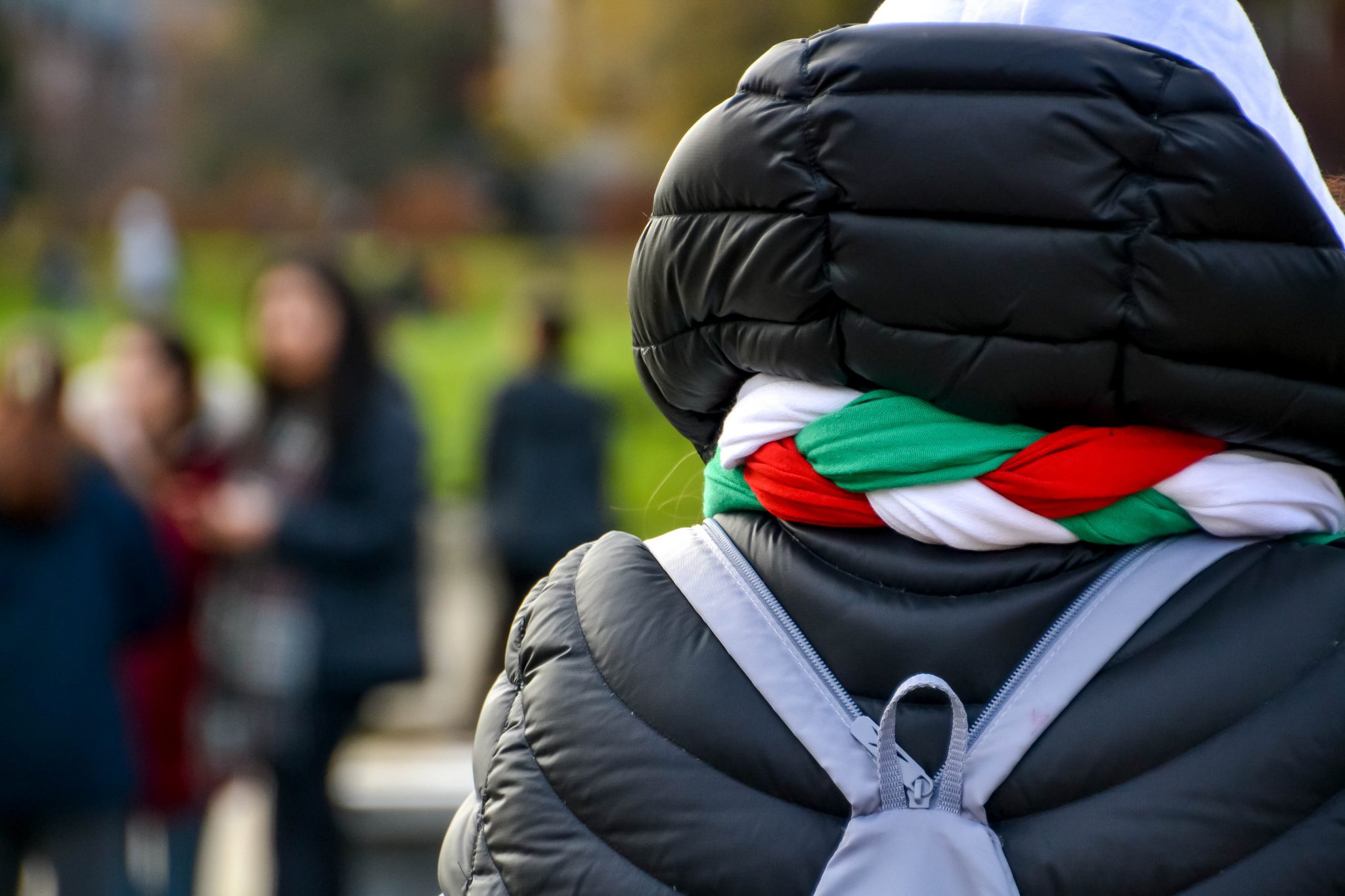 A protester wears a scarf with the colors of the Iranian flag at the Iranian Student Foundation Rally on McKeldin Mall on Nov. 30, 2022. (Jess Daninhirsch/The Diamondback)

Iranian student organizations at the University of Maryland rallied at McKeldin Mall Wednesday to raise awareness of protests in Iran.

The protest is one of many happening at more than 200 universities across the U.S., Europe, Canada and Mexico, according to criminology and criminal justice graduate student Mahour Manshaee.

These protests are part of an international movement that emerged after the death of Mahsa Amini, a 22-year-old Iranian woman who died after being arrested by Iran’s morality police in September.

Manshaee, the Iranian Graduate Student Foundation president, said the main goal of this rally is to stand in solidarity with protestors in Iran, many of whom are also students.

At the protest, the IGSF presented a list of demands for universities across the globe, including blocking any university actions that benefit the Iranian government. They also requested universities release statements condemning the attacks on academics in Iran.

The graduate student group also requested that universities advocate for the release of Iranian protestors and boycott any Iranian university officials who support the Iranian regime.

Iranian Scholars for Liberty asks universities to accommodate Iranian students looking to leave the country through scholarships as well as paused tuition, and it also requests funding for programs that raise awareness of the demonstrations in Iran.

Persian professor Fatemeh Keshavarz said at the rally it is up to those outside of Iran to watch the actions of the country.

Keshavarz, the director of the Roshan Institute for Persian Studies at this university said she was worried that the Iranian government will start executing and torturing protestors. She praised the actions of the “young, brave generation” who won’t accept the conditions in Iran.

“People are sick of it. The government of the Islamic Republic of Iran knows no reform anymore,” Keshavarz said.

Keshavarz emphasized the distinction between making decisions for Iranian people and spreading their message.

“The only thing we can do, we cannot decide for the people inside,” the professor said. “They are the ones who are subjected to all of this.”

Mechanical engineering doctoral student Ghazal ArabiDarrehdor spoke at the protest about Iranian activist Arash Sadeghi, who was arrested multiple times for demonstrating against the Iranian government.

“We are inspired by him and many other brave souls who do the same thing. We will stand by him and the other political prisoners,” ArabiDarrehdor said.

The rally ended with community members floating paper boats down the fountain at McKeldin in remembrance of Kian Pirfalak, a 9-year-old boy killed in Iran during a government crackdown in November. One attendee placed rose petals in their boat.

Manshaee stressed the importance of keeping attention on the protests as campus community members dispersed.

“We should never stop until [the Iranian government] stops and we don’t see a future for them to stop,” Manshaee said.

CORRECTION: A previous version of this story misstated a quote from Mahour Manshaee. This story has been updated.