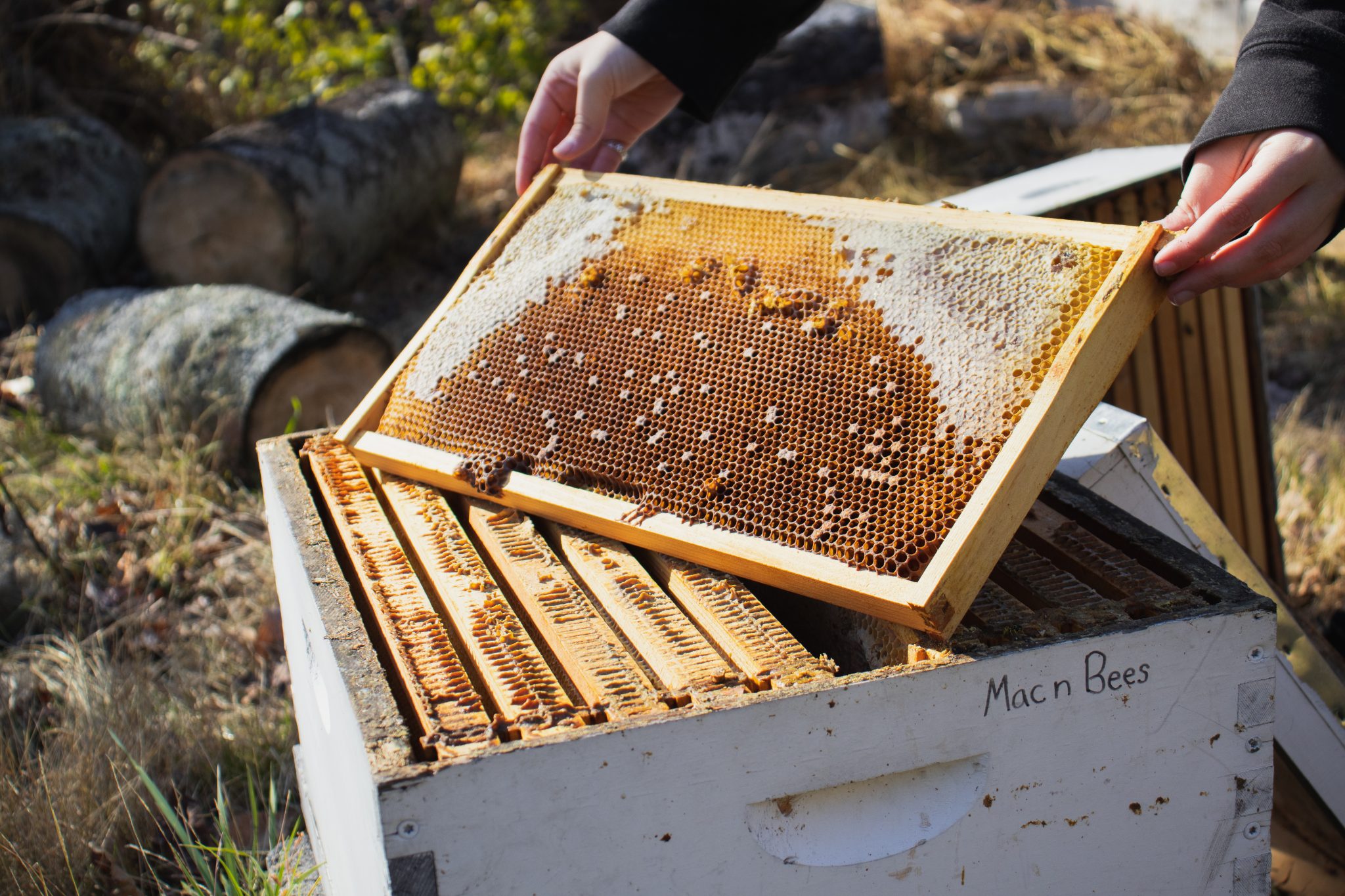 Honey from the bee hive near the Xfinity Center in College Park on Dec. 2, 2022. (Neelay Sachdeva/The Diamondback)

As winter rolls in and weather becomes too cold to tend to the apiary, the University of Maryland Beekeeping Club takes refuge in the greenhouse by Xfinity Center to craft soap, candles and chapstick from the product of the bees they cared for throughout the semester.

This year is no different, and club activities continue as usual, but how the bees will fare, out in the cold weather with a reduced population from a summer storm, may be another story.

The bees returned to the campus at the end of October after a massive storm in July tore down their hives and wrecked some of their homes.

The apiary, tucked in a corner of forest just south of Xfinity and surrounded by old trees, was buffeted by strong storm winds, according to sophomore psychology major and Beekeeping Club President Eli Pralle. Eventually, the strong winds caused several trees to fall, knocking over some of the five hives tended by the club and blocking paths to the apiary.

“There’s no protocol on how to deal with storms in our [beekeeping guides], so this was an entirely new experience for us,” Pralle said.

When the way was clear, students righted the hives, but according to the beekeeping club’s faculty advisor and the UMD Extension and Bee Squad coordinator for the vanEngelsdorp Bee Lab, Mark Dykes, the damage had already been done.

“Anytime the hives are disrupted like that and broken apart and exposed to the elements, it’s really hard on the bees,” Dykes said.

The hives had been knocked over but not destroyed, as Dykes had seen before in his 15 years beekeeping, but three of five hives died, known as crashing, mostly due to population loss. The bees were quickly moved to apiaries used for vanEngelsdorp Lab research in Beltsville, where they stayed until Oct. 25, when the two remaining hives returned to the campus.

Although the bees weathered the storm, they may not be out of the woods yet. The bees are struggling with common pests such as hive beetles, varroa mites and deformed wing virus, according to Felicia Shechtman, junior environmental science and policy major and the Bekeeping Club’s chief operating officer.

“They’re not doing too great, so we’re just hoping they make it through this winter,” Shechtman said.

Pralle said because bees shiver to keep their hives warm throughout the winter, their survival depends on their food and population. While the weather was still warm, the beekeeping club members were able to feed the bees sugar water, but now “there’s not really a whole lot to be done,” Pralle said.

An important part of the bees survival is their ability to find forage, or flowering plants, during the spring and fall, Dykes said. Forage, in addition to supplemental food from the Beekeeping Club, will carry the bees through the winter. But this area lacks forage due to the large amount of lawns.

“Monocultures of grass in urban areas can be very hard on the pollinators … they definitely need that added substance of flowers,” Dykes said. “To help pollinators, the easiest thing to do is just plant flowers.”

This is to the benefit of not only honeybees, which, like livestock, play a large role in agriculture, but also for native pollinators that support the local ecosystem.

If the hives make it through to the spring, Dykes plans to split the remaining hives and create two or three new ones, so the beekeeping club apiary will be back to its former numbers.

“[The storm], in a way, helped because it opened up the apiary gave a lot more sunlight, which is always good for bees,” Dykes said. “At the end of the day, it was an adventure, but I think we’re actually coming out on the better side of it.”