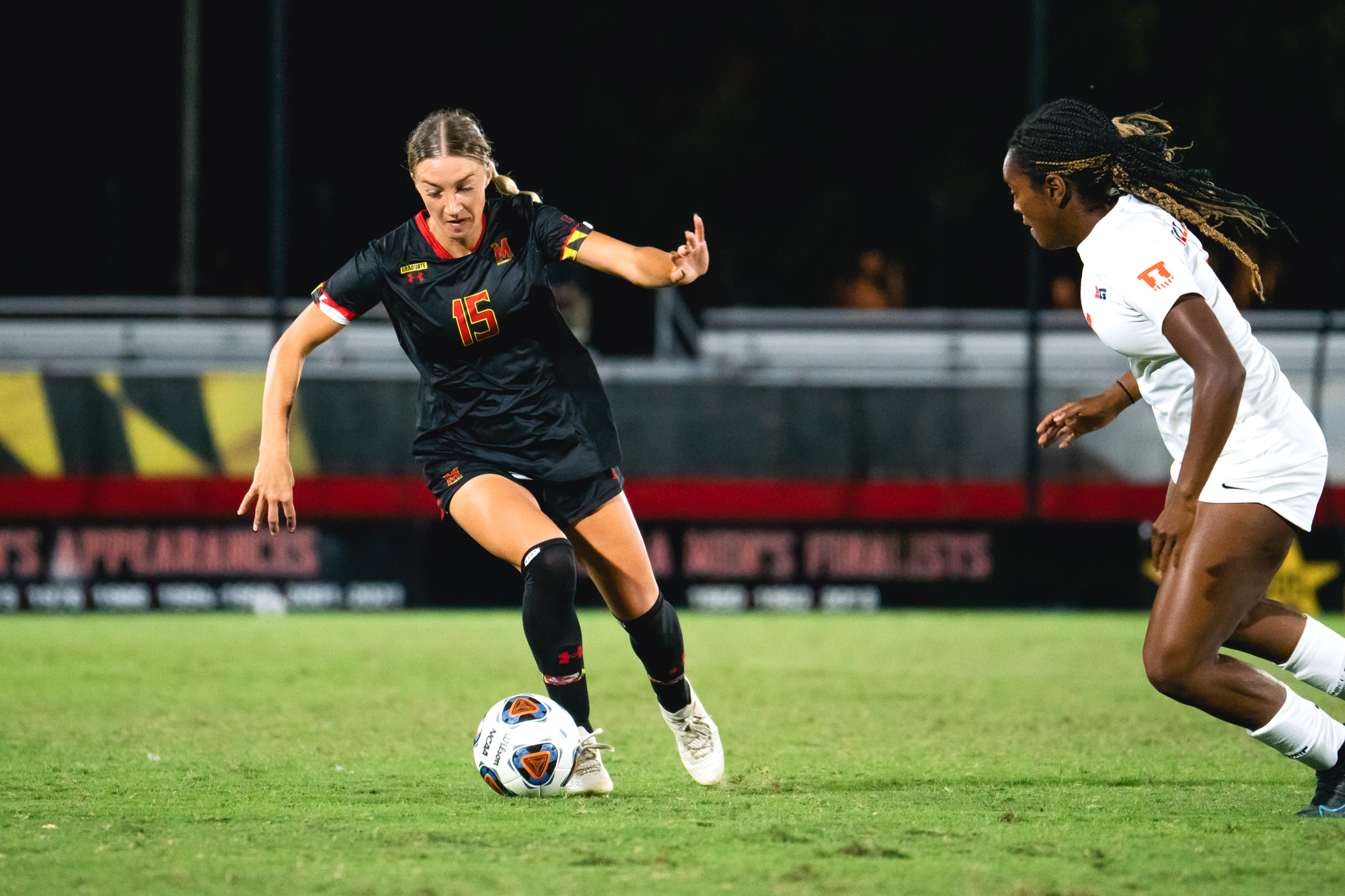 Maryland women’s soccer’s Amanda Schafer wasn’t sure if she wanted to continue her soccer career after graduating from the University of Rhode Island, but conversations with her family, notably her older sister Alexandra Schafer, encouraged her to give the sport another shot.

Alexandra Schafer played soccer at UMass and had a fifth year but didn’t take it, she said. That firsthand experience informed her advice to her younger sister, where she told Schafer how special it was to play the sport they loved.

“I kind of voiced to her how special it is and how you can always start working, you can always work a nine-to-five, but not everybody can go back and play soccer,” Alexandra Schafer said.

And so the younger Schafer began the search for her new home, sending out film to schools such as Villanova, Maryland and Eastern Carolina.

College Park was not a serious consideration in the early stages.

“One of my friends just was like, ‘You should reach out to Maryland. They’re recruiting a lot of players,’” Schafer said. “I was like, ‘There’s no way I could play there, there’s no chance.’”

There was a chance, one the dual-threat defender seized after a circuitous path brought her to College Park. Schafer became one of Maryland’s key players in her only year with the program. She accumulated 1,287 minutes, started 12 consecutive games and logged six 90-minute performances as a reliable defender for coach Meghan Ryan Nemzer’s squad.

Schafer only visited the school on a last minute trip to see her then-long-distance boyfriend who lived nearby. But when she came to the university, she was struck by Nemzer’s enthusiasm for her play.

“The way she was excited to potentially get ahold of me as a player … was something that really jumped out at me because I hadn’t really seen that in the last four years at my old school,” Schafer said.

That visit turned Maryland from a distant option into her desired destination — the defender called Nemzer to tell her she wanted to be a Terp from the parking lot of the coach’s office.

“She was probably still 10 feet away from me,” Schafer said.

The decision came with uncertainty. The Big Ten was a higher level of competition than Schafer had played at Rhode Island. Maryland itself was in the midst of building its new identity after Nemzer’s hiring.

Schafer was one of 19 newcomers the Terps would welcome ahead of the coach’s first season at the helm of Maryland women’s soccer, an addition to the roster the coach instantly valued.

“I saw her name pop on the transfer portal, it was sort of late in the game, but I pulled up her film and was immediately interested,” Nemzer said. “Her ability to attack, her ability to defend or 1v1 as an outside back … That was the one position I sort of had a question mark going into the season.”

But Schafer didn’t know how expansive her role on Maryland’s roster would be, so much so that she asked her mother not to travel to Temple for the Terps’ season opener, Alexandra Schafer said.

“I think she was just not sure where she fell,” said Schafer’s mother, Andrea Schafer.

Schafer fell into the starting lineup for the first game but her role remained unclear. After that season opener, Schafer didn’t get her next start for the Terps for almost three weeks. Then Nemzer called on her against one of Maryland’s toughest early season tests, hosting then-No. 24 Wake Forest.

She rose to the challenge and registered her first 90-minute game of the season. Schafer’s performance helped Nemzer better understand her role.

“She won 12 out of 15 individual battles which is sort of unheard of, so I knew at that point she was going to be an outside back,” the coach said.

Schafer was able to replicate these performances again, logging an almost 90-minute performance against Saint Joseph’s. But her most memorable performance may have come in the win against Michigan, Maryland’s first game in Big Ten play this season.

The Wolverines were the number nine-ranked offense in the nation heading into the game, averaging 3.25 goals per game. Their offense was headlined by junior forward Sammi Woods, who led the Big Ten in goals, with seven.

At kickoff, Woods lined up on Maryland’s left flank, across from Schafer. Despite the imposing matchup, the Terps managed to keep Michigan scoreless and Woods without a shot in the entire game.

The defensive performance powered the Terps to their first win against the Wolverines in program history, and their first Big Ten win since 2019.

Schafer’s success may have surprised her when she made the choice to come to Maryland, but those around her knew she’d been built to conquer any challenge. Before she played soccer, she first laced up ice skates to play hockey on a rink her father built in the backyard.

“She always played with the boys. It was more physical playing full-contact hockey with boys,” Peter Schafer said. “She always had to have a little more, you know, physically she’s smaller, so she had to be tenacious. And I think it’s those moments where she demonstrated that character, that tenacity to keep up.”

Schafer continued playing hockey with boys up until the ninth grade. She started playing girls’ hockey when she began attending Pembroke High. She played both hockey and soccer in high school, eventually ending up as the captain for both squads and leading her high school hockey team to an undefeated record in 2017.

“She always loved our saying in hockey that, ‘This is the time to go out, step on their throat,” Flynn said. “She epitomized that, she has that killer instinct to put teams away, and I think it just goes through all of her athletic career.”

That grit transferred to her soccer career, particularly in a must-win match for Pembroke girl’s varsity soccer that Kerri Cantino, Schafer’s former varsity soccer coach still remembers. Schafer was plagued by cramps but fought to stay on the field as long as possible.

“If she did come off, she’d … roll her calves and get right back out there,” Cantino said.

“You don’t have to put the stinky pads on every time you play,” she joked.

Still, her hockey experiences carried over from the ice to the grassy pitches to help make her the soccer player she is today — one that made a strong impression on her teammates and coaches at Maryland in just one year.

“I wish I had three more years with Amanda Schafer,” Nemzer said. “I’m grateful that I’m connected to her for the rest of my life because she’s good people.”

Maryland’s 3-1 win against Purdue marked Schafer’s final game with the Terps. Nemzer said she believes the defender’s best soccer is ahead of her, but even if that game was the end of her college career, the year brought her additional joy playing the sport she loved — something she wouldn’t have had if she ended her career after Rhode Island.

“It’s crazy to think a year ago, she was about to hang up her cleats,” Alexandra Schafer said.