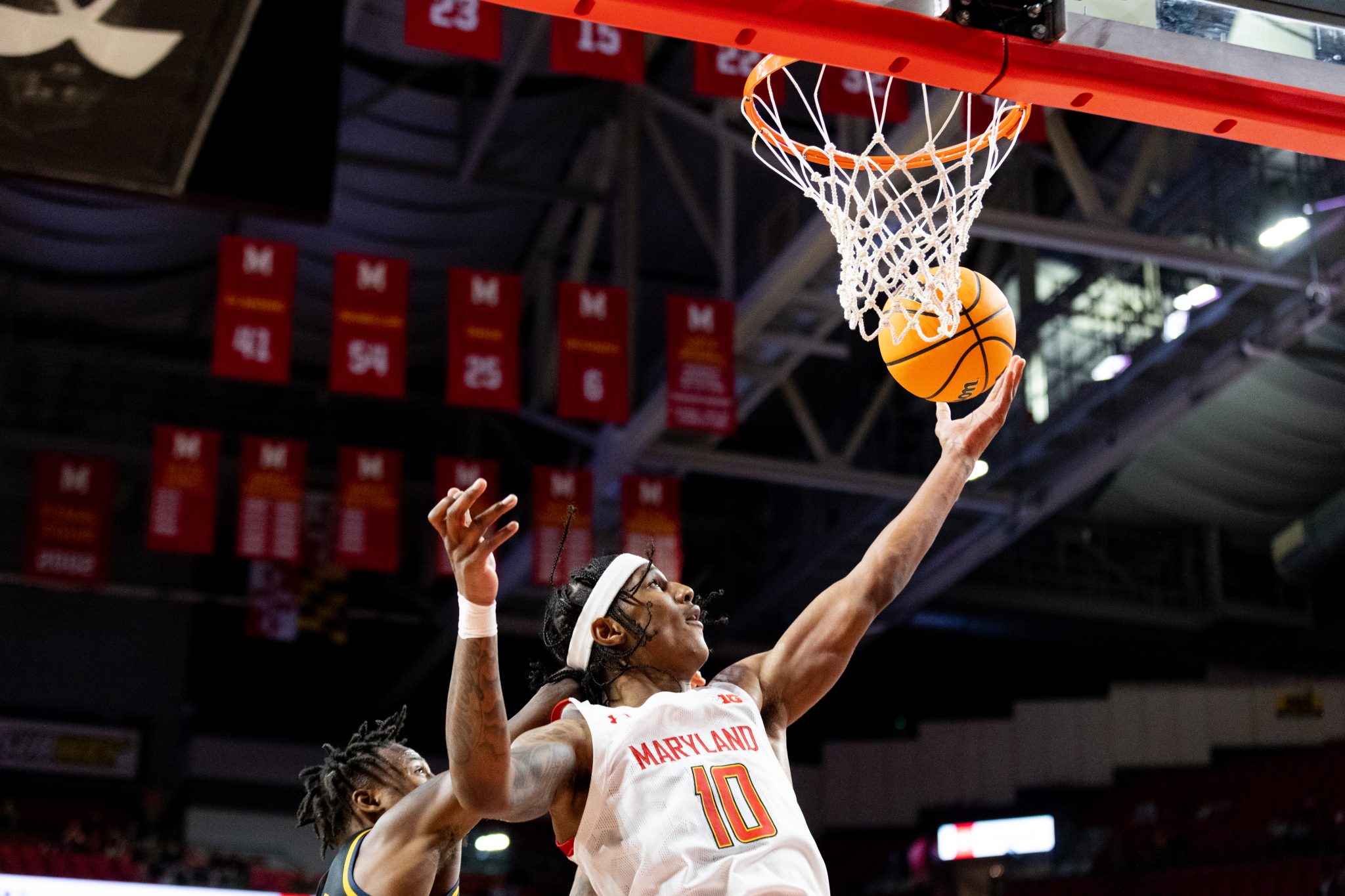 Julian Reese faked a pass to Ian Martinez before putting the ball on the floor and driving to the basket himself.

Reese stepped into his defender before maneuvering the ball from left to right, getting his layup to roll through the nylon to break his career high for points in a game in the opening half of the Terps matchup against the Golden Eagles.

The sophomore forward’s 24-point double-double led No. 23 Maryland men’s basketball to a 95-79 win over Coppin State to advance to 6-0 in coach Kevin Willard’s inaugural season.

“We knew we had a size advantage,” Willard said. “[Reese] was a monster, they were low enough to box him when he had the ball in the post, so it’s an easy way to go get it and he’s really being aggressive on the offensive glass.”

The Terps defeated a Golden Eagles team coached by Juan Dixon — who helped the Terps to a national championship in 2002 as a player — in the first meeting between the schools in just under 33 years.

Maryland started slowly from three, missing its first four attempts from deep. Donta Scott hit the Terps’ first three-pointer and Hakim Hart hit twice toward the end of the half as they finished the opening period 3-for-10 from behind the arc. They didn’t fare better in the second half, going 1-11.

The Golden Eagles didn’t have the same problem, taking the lead just over 10 minutes into the first half with three-pointers from Isaiah Gross, Sam Sessoms and Nendah Tarke that powered a 9-0 run.

Their lead was short-lived as Maryland leaned on Reese to regain an advantage it maintained until the final buzzer.

The sophomore sank all nine of his shot attempts in a perfect first half. Reese hit four free throws to break his single-game career high in points and entered halftime with a game-high 22.

Offensive rebounds helped the Terps create second-chance opportunities that they capitalized on. They grabbed 10 in the first half, with Reese grabbing six of those himself as he continued to dominate inside.

“I felt like those boards gave us the momentum going into the second half, definitely,” Reese said. “That’s just really a spark plug for us to do better things in the second half and build on things.”

Two Hart three-pointers in the last 70 seconds of the half in addition to Reese’s first-half success gave Maryland a 47-36 lead at the break.

Reese added two rebounds in the second half to record a double-double, but played just eight second-half minutes after picking up four fouls, including a technical — one of six handed out to either team by officials throughout the game.

Reese and Gross were both assessed techs after jostling for a rebound about five minutes into the second half, and the Terps bench was called for one on the same play. Hart, Sessoms and Alex Rojas also picked up technical fouls during the game.

“I feel like teams like that, they understand the talent level is different and they try to do things outside of basketball to get the edge, try to take us out of our game,” Reese said. “I feel like we handled that well.”

Sessoms, Coppin State’s top-scorer, kept the game close each time Maryland grew its advantage early in the second half. The guard finished the game with 28 points, but the Terps allowed just two other Golden Eagles to score in double digits.

Willard’s squad gave up a season-high 79 points to Coppin State, largely in part to Sessoms’ success. The coach hopes to see players like Reese blossom on the defensive end after his early-season success on offense.

“I think [Reese’s] biggest thing is to become a defensive presence. He’s got the ability, he’s got the athleticism … What I love about him is he’s a very smart basketball player,” Willard said. “[We’re] trying to evolve him into understanding what a presence he can be on the defensive end.”

Jahmir Young scored 15 second-half points and finished with a season-high 21 to help Maryland pull away. Two Hart free throws with just under four minutes to go gave the Terps their largest lead of the day at 19.

The senior continued to shoot the ball efficiently, scoring a season-high 22 points on 7-for-11 shooting from the field.

Reese, Hart and Young all notched over 20 points, the first time three different Maryland players notched 20-plus points in a game in over 20 years, as the Terps remained unbeaten and sent Dixon home with a loss underneath a national championship banner he helped the Terps hang.

“They’re getting used to playing with each other, I think they’re understanding … when to get guys to basketball,” Willard said. “We’re still a major work in progress, but I think from the standpoint of really the first five [players], I think they have a really good feel for what everybody can do on the court.”