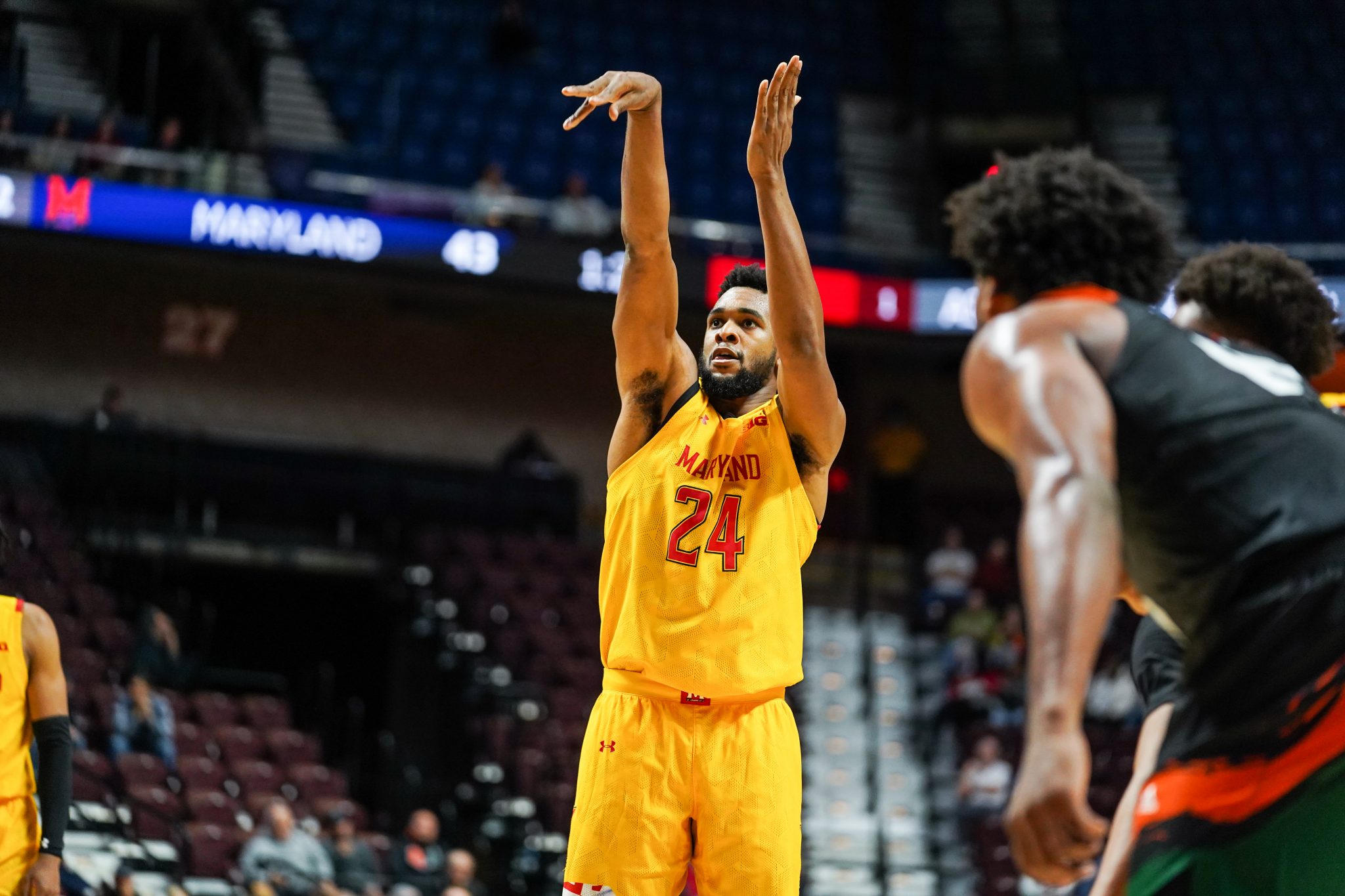 Maryland men’s basketball came into the weekend unbeaten but unproven. After a decisive Julian Reese slam pushed the Terps’ late lead over Miami to 18, it became clear Maryland would stay unbeaten, and take steps towards validity with a tournament championship.

The championship capped off a weekend that saw Maryland put up season-high numbers in scoring for consecutive games against potential postseason opponents.

Scott played a major part in that. He led the Terps Sunday with 24 points while Julian Reese followed him up with 17. With a dominant performance by the pair over the weekend, coach Kevin Willard might be meeting early expectations.

“We have unbelievably high-character kids who want to win and they understand what it takes to win,” Willard said. “They’re bringing it every night and they’re getting rewarded.”

Miami didn’t go down without a fight. The Hurricanes quickly made it clear that they wouldn’t be handled like how Maryland beat Saint Louis the day before.

Wong created problems for the Terps when he was on the floor, creating shot opportunities for himself and slotted a nice pass to teammate Wooga Poplar in transition for an open dunk early in the first half.

“We stressed making everything really hard and contested for him,” Don Carey said. “He hit a lot of tough two’s, which we’ll live with…if he was going to do that all night long, that’s fine with me.”

On offense, the Terps helped themselves. Reese played an excellent supporting role, helping Maryland take advantage of second-chance points on the offensive glass and offered points in the paint for himself and offensive opportunities for his teammates.

Maryland out-rebounded the Hurricanes 39-20, with Reese providing plenty of support down low.

“I think Julian’s made some great improvements,” Willard said. “I think he gives these guys opportunities, gives them different looks where they don’t have to run a play, they can just flash up, get a hand-off, get a re-screen.”

A nifty pass from Reese in the post to Hakim Hart for a three-pointer highlighted another early efficient offensive performance seeing heavy contributions from Scott and Carey. Four of Maryland’s starters had more than seven points in the first period, while Scott finished with 15 first half points.

The Terps’ offensive proficiency covered up double-digit turnover numbers early and nullified a respectable Miami attack that shot over 40 percent in the first half, but couldn’t nearly keep up with the blistering pace Maryland set.

On the back of seven made threes, the Terps went into halftime with a 47-34 lead.

The ways the Terps scored shifted as the second half began — they failed to continue their long-range momentum but flourished in the paint. Reese and Jahmir Young drew attention in the paint for a few made free throws and layups to continue Willard’s offensive machine.

“We’re becoming a very good offensive team,” Willard said. “We’re a little bit ahead [of expectations] but I’m excited about the fact that I see so many things we can get better at.”

While the Terps had lost the three-point touch that propelled them in the first half, Miami couldn’t do enough to close the distance, even though Wong certainly tried.

Miami’s point guard contributed four points on a 6-0 run for the Hurricanes with both shots heavily contested mid-range jumpers. Wong willed Miami to a 10-point deficit, but Maryland shifted the momentum back with a Young layup and a made free throw after he nearly turned the ball over to boost the Hurricanes further.

Reeses’ late slam put the exclamation point on the win, and Maryland came out of the weekend 5-0. Despite the impressive performance on the weekend, Willard still thinks the Terps haven’t hit their stride yet.

“We’re really not worried about signature wins or where we are,” Willard said. “I still think we have a long way to go.”