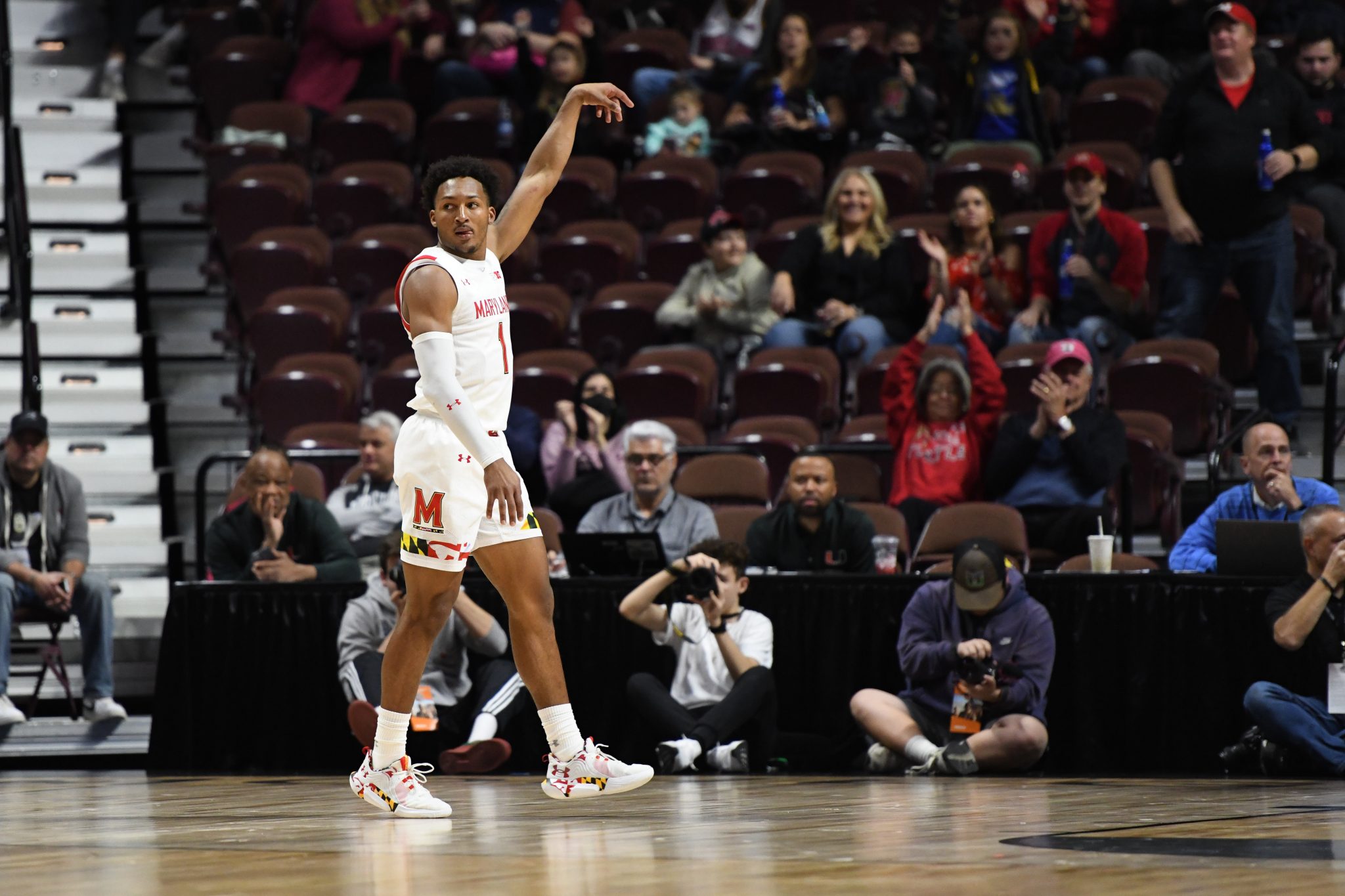 Jahmir Young lifts his arm in the air in celebration during Maryland men's basketball's 95-67 win over Saint Louis on Nov. 19, 2022. (Evan Sayles/The Diamondback)

UNCASVILLE, Conn. — Donta Scott stepped into a three-pointer that swished through the net, a familiar sound for Maryland men’s basketball in the opening half of its matchup against Saint Louis.

The Terps weren’t done despite the first half clock finding down. Don Carey splashed his fourth three of the half as a Mohegan Sun Arena crowd dotted with Maryland jerseys roared, giving the Terps a 24-point lead heading into halftime.

Maryland men’s basketball used its early advantage to see off a previously undefeated Saint Louis, 95-67, in the opening game of the 2022 Basketball Hall of Fame Tip-Off in Connecticut Saturday. Kevin Willard became the first Terps coach to begin their career with four straight wins as Maryland drained a season-high 13 threes and advanced to 4-0.

“Coach Willard really been emphasizing the inside-out threes, so just penetrating, getting into the paint and then making a read, kicking out to teammates,” Carey said. “Those are better quality threes than transition threes or dribble down threes.”

The Terps will take on the winner of Miami and Providence in the championship game Sunday at 1 p.m.

Maryland stunted a Saint Louis offense that averaged 88 points per game early, holding the Billikens to 25 percent shooting from the field in the opening half while the Terps found success unleashing from all over the court themselves, scoring a season-high 95 points.

Back-to-back three-pointers from Hakim Hart and Don Carey extended the Terps’ lead to eight points just four minutes into the game, setting the tone for how coach Kevin Willard’s squad would shoot the ball throughout the game.

Maryland drained nine of 19 three-point attempts in the opening 20 minutes, matching its best output from behind the arc this season in an entire game. Carey showcased his ability to shoot from range after failing to hit more than one three-pointer in a game so far this year, draining four of his nine first-half attempts.

Scott and Hakim Hart both notched multiple makes from three as the Terps’ early lead grew to double digits. Hart led the Terps in scoring at halftime with 16 points after starting the game a perfect 5-for-5 from the floor.

The senior was still able to atone for his first miss from the floor on a layup, grabbing his own rebound and dropping the ball through the net.

Hart, Scott and Carey combined for 40 of Maryland’s 51 first-half points as the Terps carried a 24-point lead into halftime against a Billikens team receiving the 30th-most votes in the AP Poll.

Scott helped Maryland maintain its lead despite Willard’s squad’s efficiency slowing from behind the arc, shooting 4-for-13 in the final 20 minutes.

The senior added 13 to his 12-point first-half performance in the latter period for a total of 25 points, tying his career-high from last season.

The Terps still shot well from the field and the charity stripe despite cooling off from behind the arc. A litany of Saint Louis foul early in the second half got Maryland to the line early and often. The Terps converted on 14 of their 21 free throws as their lead ballooned to as high as 32 points in the second half.

Ian Martinez accounted for a majority of Maryland’s points for the bench. Ten of his 14 points came in the second half, when the junior hit two three-pointers for his most points in a Maryland jersey.

“This is a very good shooting team,” Willard said. “I have confidence one through five with guys shooting.”