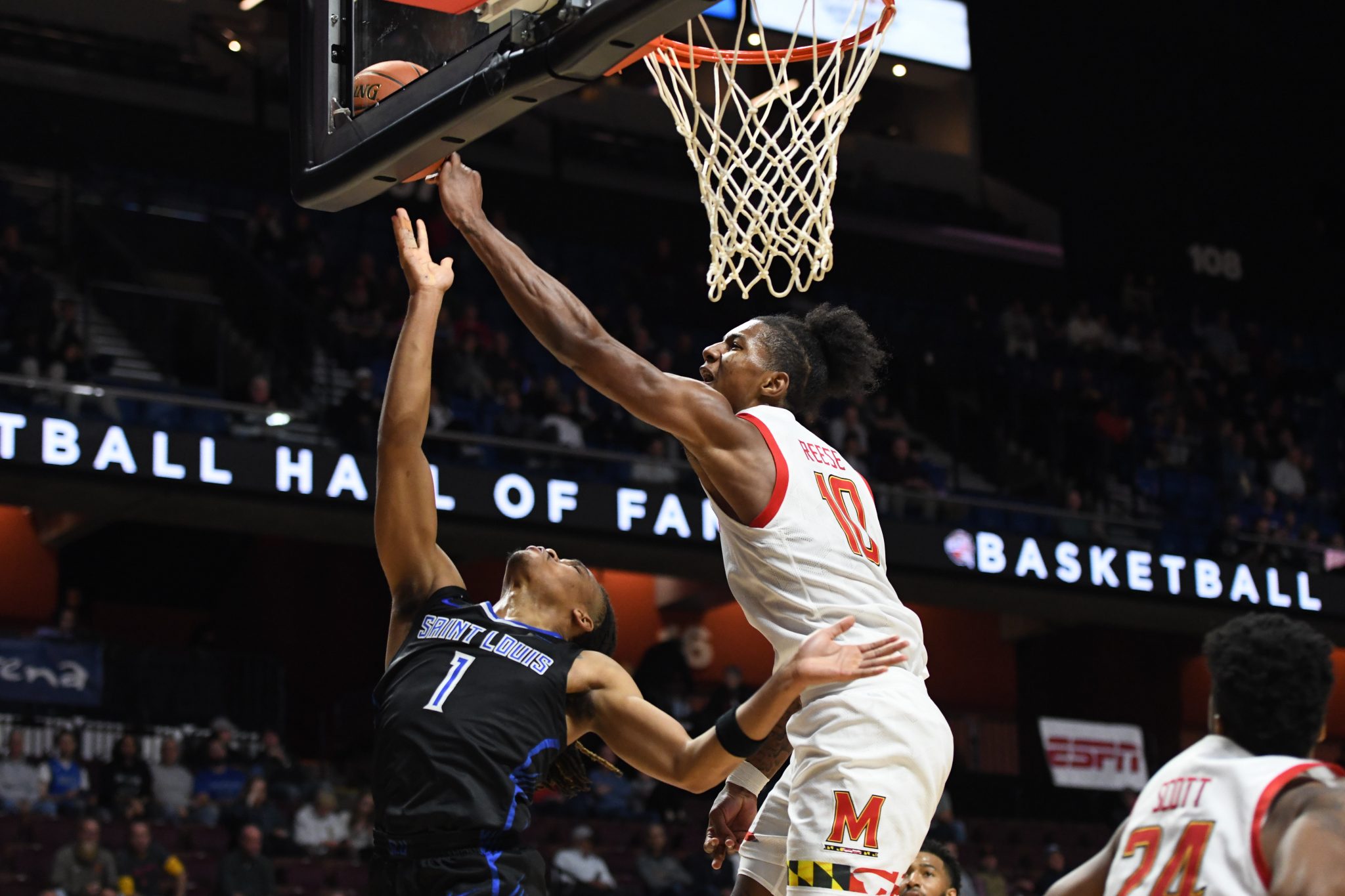 Fans chanted Kevin Willard’s name, consistently and with a steady tenor, as the clock wound down on Maryland men’s basketball’s 95-67 win over Saint Louis Saturday.

After the Terps suppressed one of the best playmakers in the country in Billikens guard Yuri Collins, the flattery might’ve been warranted.

Collins ran one of most potent offenses in the nation through Saint Louis’ first three games — averaging 88 points per contest. The guard averaged a double-double in points and assists in those games.

But Saturday, Collins met his match. Maryland managed the Billikens and Collins with a physical defensive effort. The guard finished with 12 points on 3-of-11 shooting from the field, three rebounds and six assists.

“It was key for us to contain [Collins], just following our coaches’ game plan, that really helped us a lot, just containing him,” Donta Scott said.

Collins had led the country in assists per game before Maryland halted Saint Louis’ offense enough for them to attempt to catch-up through most of the game.

“I think Yuri’s one of the best point guards in the country,” Willard said. “We just wanted him to see bodies at all times. We didn’t want to see open lanes, I just didn’t want him having confidence that he was gonna get in the lane and not get hit.”

Outside of Collins, Saint Louis struggled shooting the ball as a whole. The Billikens shot 8-of-32 in a first half that ended with Saint Louis coach Travis Ford making a run at a referee in anger for a potential missed call. Ford had to be held back by Collins, but not before he received a technical foul.

The Billikens finished with a more respectable 13-of-26 showing from the field in the second half, but they couldn’t make up the large advantage the Terps built in the opening 20 minutes.

“I didn’t do a good enough job explaining how physical this team is, by far the most physical team we’ve played,” Ford said. “I think bad offense led to bad defense down the line and it snowballed on us.”

Maryland’s offense contributed volumes to the defensive effort. The Terps collected more fast break points than Saint Louis, had less turnovers, and shot at over a 50 percent clip from the field — as well as just over 40 percent from three.

Meanwhile, the Billikens struggled from behind the arc throughout. Saint Louis shot just 5-for-20 from deep, and Collins echoed that shots just weren’t falling for the Billikens.

The Terps have stymied every opponent from three-point range through four games, holding teams to 21.3 percent shooting from deep — the 12th lowest mark in the nation, according to KenPom.

“They did a great job taking away the three and taking away the rim … we were able to get the ball where we wanted, just didn’t get much out of it after that,” Ford said.

Maryland will play an undefeated Miami team at 1 p.m. on Sunday for the 2022 Hall of Fame Tip-Off Tournament championship.

Willard will hope to see more of the Terps’ intense defense as he gets another opportunity to please Maryland fans against a former ACC foe.

“Tomorrow’s an opportunity to win a championship, so anytime you have that opportunity you have to seize it,” Willard said. “These guys are getting rewarded for their hard work.”